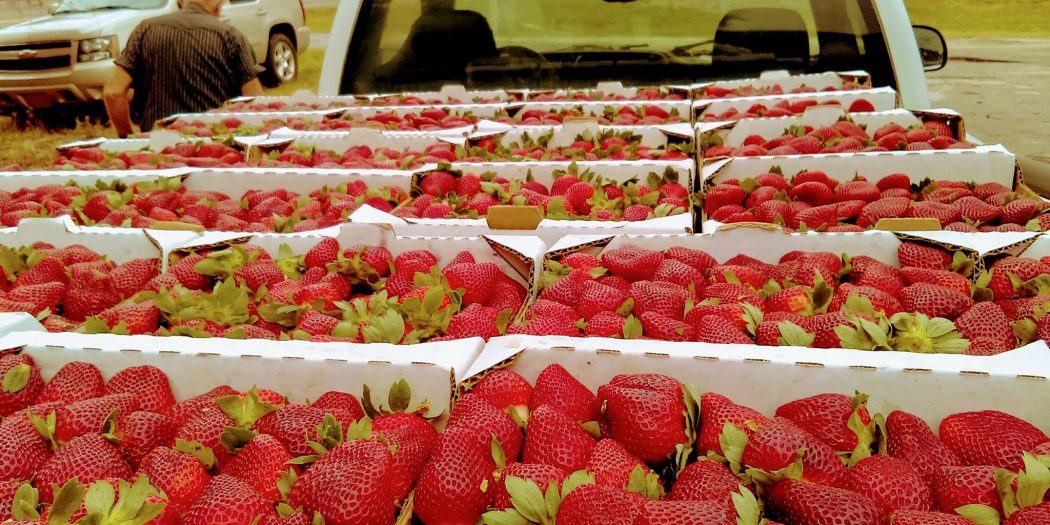 Roger's Farm in Alachua County is one of the many local farms that sell strawberries. Farms like these are in danger as Mexican strawberries are imported into the United States. (Anastasia Sims/WUFT News)

To most, a groundhog tells when winter is over. But for Floridians, the annual Florida Strawberry Festival ceremonially kicks off the spring season, and more importantly, strawberry season.

However, a shadow now looms over this Florida tradition. The state’s lucrative strawberry industry could be in trouble if strawberry farmers don’t start getting more for their berries.

Florida is one of the biggest domestic producers of strawberries, second only to California., and it’s the only producer of winter strawberries in the United States. But Florida farmers are experiencing a declining market in recent years, said Zhengfei Guan, a University of Florida economist. The reason for this decline, he said, is the massive influx of Mexican strawberries.

Guan works with the Florida Strawberry Growers Association (FSGA), an organization that calls itself the voice for strawberry growers. Since 1982, they’ve supported about 11,000 acres of berries throughout the state through promotion and research, according to the organization’s website.

From 2000 to 2017, the volume of berries imported from central Mexico increased fivefold, so now Mexico produces 60% more strawberries than Florida, according to Guan’s study for the FSGA. Guan said this new market competition is putting immense pressure on Florida’s industry and farmers are struggling financially.

That concerns Kenneth Parker, FSGA’s executive director. He has worked in strawberry farms around Plant City for more than 20 years and knows how difficult it can be for farmers.

The new growth in the Mexican strawberry industry enabled some unfair trading practices that have pushed Florida growers to lower their prices, Parker said. These low prices, he said, are unfair because to stay competitive, domestic farmers have to give up some of their revenue, therefore, making less money every season.

This practice of lowering strawberry prices has pushed local producers to the brink, Parker said. Some farmers he has worked with say that if this continues, they’ll have to sell parts of their land.

Selling land is a big deal for Florida strawberry farmers. Most are generational farmers, meaning the same family has passed down their plot of land for decades.

Sizemore Farms, located near Plant City, has been family operated since the early 1900s. They have a 200-acre strawberry farm that has helped them produce berries for major grocery stores like Publix and Winn-Dixie.

Alison Sizemore, the communications director of Sizemore Farms, said her family’s farm saw a decrease in prices for their berries. The revenue loss traces back to the negative effects that imported produce has on Florida’s strawberry industry.

The biggest defense local strawberry businesses have against the unfair pricing is having Floridians know and care about the issue, she said.

“It’s important for Florida consumers to demand Florida grown products in their grocery stores,” she said. “In doing so, they are supporting the Florida economy, locally grown produce and Florida farm workers.”

Alicia Jones, a Gainesville local, agrees. She recently visited Roger’s Farm, in Alachua County, something she has been doing for more than four years. But this year, she said, each row seemed to have bushes filled with perfect berries. More so than usual.

Jones picks the berries herself so she can buy them in bulk; she’ll use them for the rest of the year instead of buying from a grocery store. Usually, Jones said, she uses the strawberries in homemade jams, pie filling and smoothies.

Although she said she does not know much about the difference in prices between Florida and Mexican berries, it’s important for Jones and her family to support local businesses.

“(Roger’s Farm) could raise their prices and we’d still go there,” she said. “It’s more than the berries; it’s an experience.”

But successful u-pick sales might not be enough to keep Florida strawberry farmers afloat.

Some citizens care more about prices than anything else. Pam Harrison, 54, has visited strawberry farms around the area but said she goes to be outdoors, not to get a good deal.

In fact, she said she has not been strawberry picking since last year. Instead, she buys her produce at grocery stores like Publix. Although she finds herself buying strawberries the most when they are in season, she doesn’t go out of her way to buy anything local or organic. To her, it’s not that important.

That’s something strawberry farmers are saddened to hear.

Earlier this year, Parker visited Washington D.C. to advocate for Florida farmers. He said that the United States-Mexico-Canada Agreement eliminated any measures that could provide relief against unfair pricing.

“We are passionate about the sustainability of Florida strawberries and other fruits and vegetables in our state,” Parker said in a statement to Congress. “It is our desire that every member of the Florida delegation sign on to show overwhelming support to the Florida growers.”

The Trump Administration negotiated the agreement with Mexico and Canada, but Congress has not approved it. Parker and the FSGA are trying to make sure that Congress members know how the agreement will affect American farmers.

Congress has not proposed legislation to protect strawberry farmers’ interests, Parker said. So, for the sake of the people and families FSGA represents, he will continue to push for legislative support.

“My only conclusion (of the United States-Mexico-Canada Agreement) is one word: devastating,” he said.