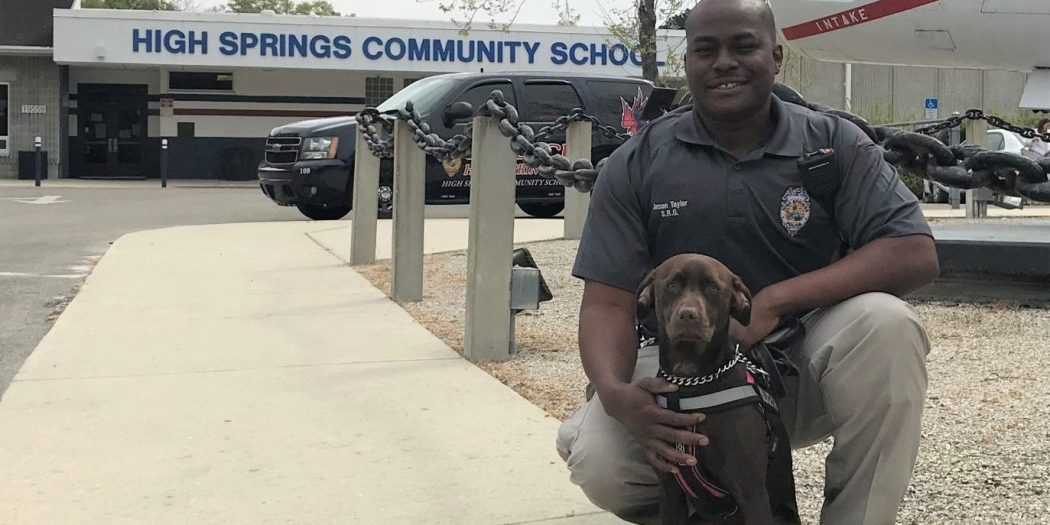 School Resource Officer crouches with his police dog, Justice, in front of the High Springs Community School. Justice is still in training but will be at the school full time as a state-approved gun and ammunition detection K-9 in the fall. (Mark Stine/WUFT News)

Each morning, a chocolate brown dog in a hot pink police vest patrols the campus of High Springs Community School.

Justice, an 11-month-old Vizsla-Labrador mix, tugs at the brown leather leash controlled by School Resource Officer Jason Taylor and sniffs her way through the halls and students’ backpacks.

Children swarm the calm pup with bright hazel eyes when Taylor unlocks the front doors to start the school day. They hardly notice the police officer handling her leash.

“They don’t even care about me anymore, they just care about the dog,” Taylor said.

Justice is the school’s new gun- and ammunition-sniffing dog, and she’ll officially begin her duties in the fall. She’s the only dog patrolling the campus of an Alachua County public school full time, Alachua County Public Information Officer Brett Rodenizer said. She’s a rescue dog and was given to the school by a private donor.

She is still in the process of training to be a detection dog. To be certified by the state, Justice must complete 200 hours of detection training and 100 hours of obedience school. She began training in February, and Taylor said she’ll complete it in about six weeks.

Taylor takes his companion to state-approved training in Lake City in the evenings, but he brings her to work each day to familiarize her with the campus and the students, as well as to give her extra practice.

“I always give her more (training) than the state requires,” he said. “It’s going to make my job a lot easier. It’ll make it easier when we go to actual training (at night).”

He also allows students to help with Justice’s extra practice.

MiMi Macklin, 13, is an office aid during one of her class periods and sees Justice often.

“The kids, we love her,” MiMi said. “Second period, I’m in the office, and we hide a scented ball, and she goes and finds it.”

High Springs Community School has had gun violence incidents in the past, although none have involved students bringing guns to campus. There was a shootout between a grandfather and police officers in May 2011, and there was a lockdown and evacuation on Jan. 11 after school employees reported hearing gunshots north of the campus.

“Just having her here is a big deterrent,” Taylor said. “If you’re going to bring something on this campus, you’re going to probably think twice because you know there’s a dog here every day.”

Taylor said two school resource officers from neighboring counties have already reached out to him via Facebook about how they can get a full-time K-9 at their schools.

“In my opinion, you should have a dog at every school,” he said. “Why not, if you can?”

Mark is a reporter for WUFT News who can be reached by calling 352-392-6397 or emailing news@wuft.org.
Previous A Drowning Subdivision Reaches For The County’s Help As Hurricane Season Approaches
Next Micanopy Community Center Providing Food, Literacy