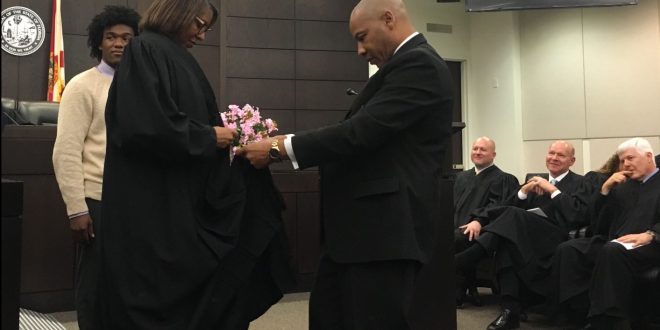 Meshon Rawls’ husband Ron Rawls helps her put on her judge’s robe at the investiture ceremony at the Alachua County Criminal Justice Center on Friday. Her son Jamahl Rawls and other judges observe in the background. (Lakshmi Gomez/WUFT News)

At least 200 people filled three courtrooms, erupted in laughter and sang together at the Alachua County Criminal Justice Center on Friday.

All were there to see Meshon Rawls’ formal appointment as an Alachua County Court Judge for the 8th Judicial Circuit of Florida.

“I was told that if we filled the courtroom today, it’d be a good problem,” Rawls said. “So, I thank you all for doing just that.”

Almost all of Rawls’ family and friends attended the ceremony as well as other judges, city officials, members of the Gainesville Police Department, School Board of Alachua County and Alpha Kappa Alpha Sorority, Inc.

Monique Haughton Worrell, an attorney and law professor, met Rawls while they both attended the University of Florida Levin College of Law.

“She’s always kept her eyes toward justice,” Worrell said. “It was that passion that led her in pursuit of the judicial position.”

Rawls’ path to a judicial seat was not easy. She unsuccessfully tried to win a nomination from the Judicial Nominating Commission 5 different times before her victory in November, she said.

However, her election made history when Gloria Walker was elected as a circuit judge on the same night. It was the first time two African-American women were elected to area judicial seats.

“Where I come from, this is a big deal,” Rawls said. “I always said I’d go back to Miami, but this is the place I needed to be.”

Rawls, born in 1971 in Miami, has already made several decisions in court with cases ranging from domestic violence to juvenile detention hearings.

Highlights of the ceremony included Rawls taking her oath, receiving her black robe and being presented her nameplate.

Phyllis Kotey, senior judge for the State Court of Florida, also gifted her a framed picture of Rosa Parks as a child and a framed Socrates quote.

Judges, Kotey said, should speak up for those in their community.

Rawls was overwhelmed by the outpouring of support she received from the community and her loved ones. She is still in disbelief that 50,799 people cast their vote for her.

“I’m not a big user of Facebook, but my status has definitely been changed,” Rawls said.

“All rise, all rise,” she yelled to the crowd. “The honorable Judge Meshon Rawls is here.”

Lakshmi is a reporter for WUFT News who can be reached by emailing news@wuft.org or calling 352-392-6397.
Previous Williston’s Regional General Hospital Faces Potential Closure In Wake Of Utility Debt
Next Alachua County School District Officials Raise Concerns About Hope Scholarships For Bullied Students