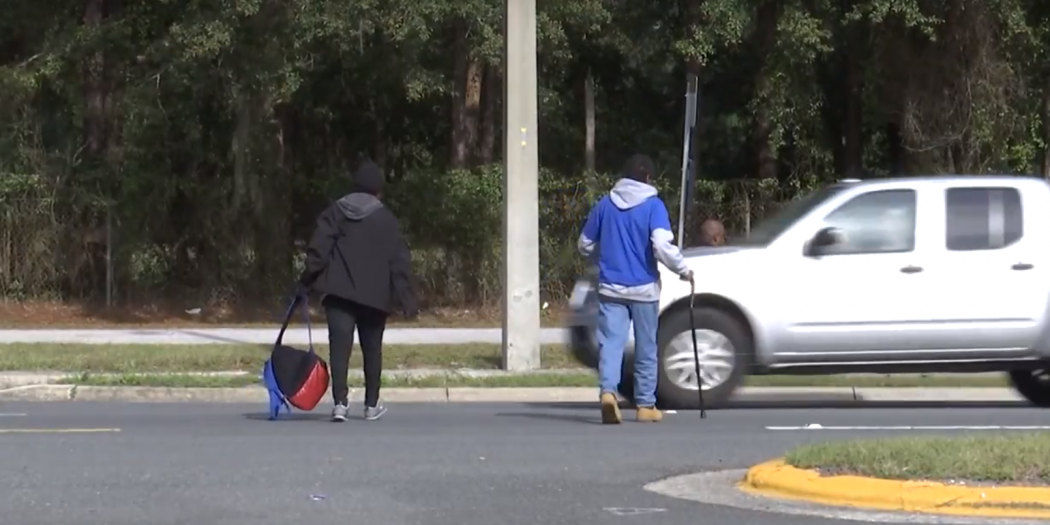 Pedestrians cross Northeast 39th Avenue to get to the bus stop. In the past five years, there have been two fatalities and four serious injuries as pedestrians attempt to cross this road. (Karla Robiana/WUFT News)

GRACE Marketplace To Get Crosswalk To Bus Stop

By Karly Wallace and Karla Robaina

The Florida Department of Transportation will finally be able to install a crosswalk adjacent to GRACE marketplace after two deaths and four serious injuries over the past five years. Its completion, however, may not come for another two years.

FDOT originally denied the proposal to install a crosswalk because the location did not meet the state’s design criteria for a non-signalized crosswalk, said Scott Koons, executive director of the North Central Florida Regional Planning Council.

But after reviewing the situation and conducting a safety study, FDOT granted a waiver to relocate the RTS bus stop 300 feet east of the Northeast 28th Drive and Northeast 39th Avenue intersection and to include a crosswalk near GRACE Marketplace.

Troy Robert, spokesman for FDOT, said there is no cost estimate for the crosswalk yet, as it is still in the beginning stages of planning and design.

Koons said the need for a crosswalk on Northeast 39th Avenue was first brought up two years ago after a pedestrian was hit while attempting to cross the highway to catch a bus.

“The intersection is extremely dangerous,” Koons said. “There have been two fatalities and four serious bodily injury accidents involving pedestrians at this location attempting to get across 39th Avenue to the bus stop on the north side in the last four to five years.”

“There would need to be a major light junction with the crosswalk,” Patel said. “Without a light there, it will be a little dangerous putting just a crosswalk on a four-lane road with 45 mph traffic.”

Advocates for the crosswalk suggested flashing lights that will warn drivers of pedestrians crossing the roadway when the signal is activated.

Patel suggested other options such as having a trolley service and/or a golf cart that could be donated to GRACE Marketplace to transport the residents to and from the bus stop. He recognized that a crosswalk placed near the shelter would be beneficial but would still be risky with the high traffic volume.

Jon DeCarmine, the director of GRACE Marketplace, said there is an urgent need for a crosswalk.

“Each day that goes by without a crosswalk out there and without sidewalks between the bus stop and the GRACE campus is another day where there’s a risk for elderly and disabled people to be getting injured or to be getting killed,” DeCarmine said.