The Future Of Dignity Village, Gainesville’s Homeless Camp, Is In Doubt

Two years after a report called a walk through Dignity Village “devastating,” city officials are still working toward closing it down.

That word was one of the descriptors used in summer 2016, when OrgCode Consulting, Inc. submitted a 15-page report to the city and county. It listed allegations of tent fires, rampant drug abuse, fights among residents and human trafficking at the homeless encampment, located at 3035 NE 28th Drive.

City data suggests the problems have continued into 2018.

Gainesville police had two full-time officers assigned at Dignity Village until June 4, said Officer Ben Tobias, the department spokesperson. However, due to staffing limitations, officers are now dispatched to the campground as needed.

“I can tell you just listening to the police radio, going over reports, we’re there probably at least once a day,” Tobias said.

In addition to citing safety problems at Dignity Village, OrgCode’s 2016 report called for a swift shut down of the encampment. The consulting firm included a list of recommended actions:

Despite the transparent instruction in the report, the camp is still operating, and incident reports and resident complaints suggest Dignity Village is still experiencing many of the same sort of problems it did two years ago.

Public records show the number of incidents has actually increased since the report was released in 2016 — particularly in assault, battery and trespassing. 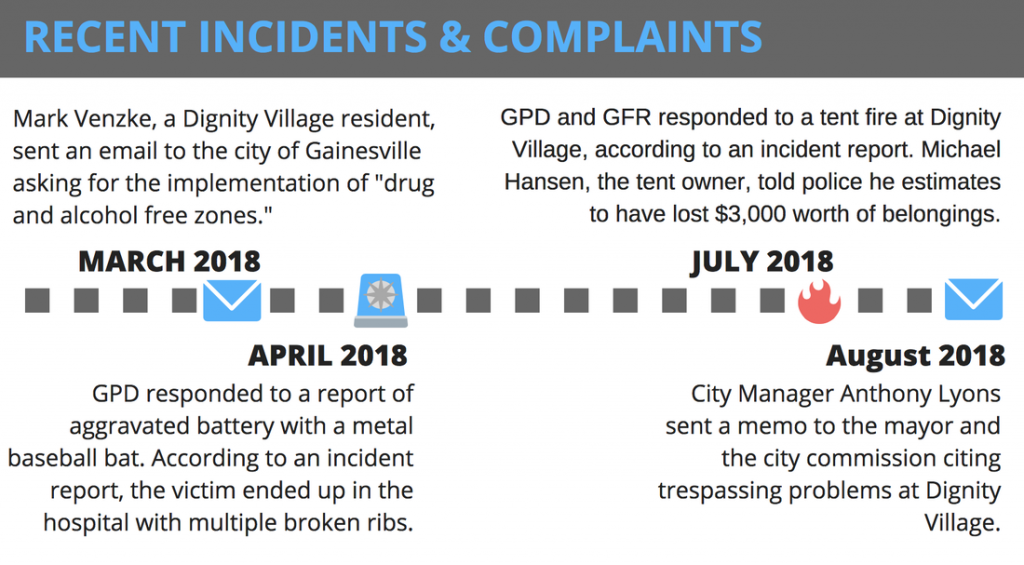 What’s next for Dignity Village?

City Commissioner David Arreola said if the city followed OrgCode’s recommendations, hundreds of people would have been put back on the street all at once. Instead, the city chose to wind down Dignity Village at a slower pace.

The city implemented what they call the“ Trespassing Tool.” According to city memos, a new policy states any resident offered permanent housing must leave Dignity Village under penalty of trespassing.

Fred Murry, the assistant city manager, said in an email on Aug. 28 that this policy shift is designed to change the message and show residents that the campground is not a permanent housing solution.

According to the agenda for an Empowerment Center Oversight Advisory Board meeting in July, a larger plan is in the works to transition Dignity Village from tents to actual houses. The city and county are considering a plan to replace the camp with a network of “tiny houses” and community gardens.