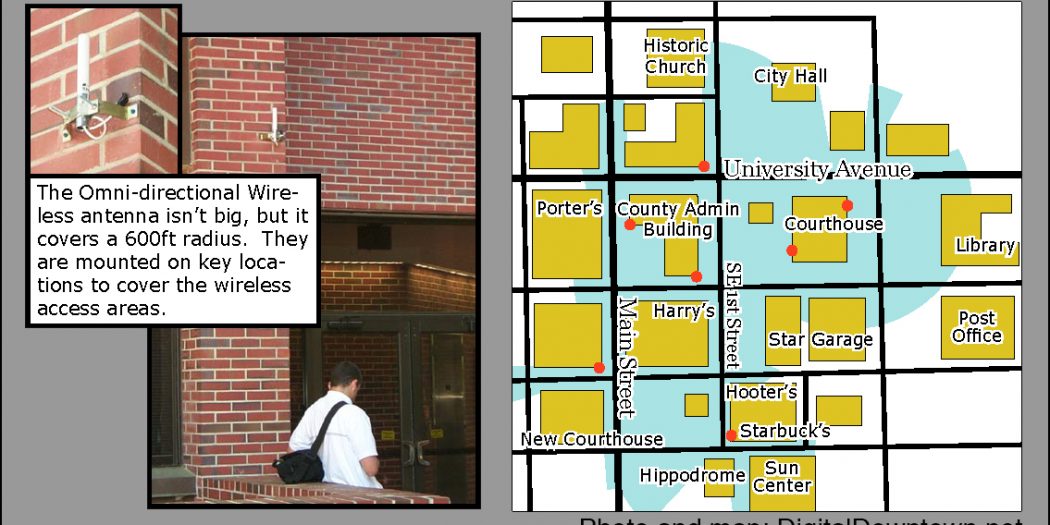 Gainesville could have an expanded public Wi-Fi access throughout the corridor of town stretching from the east edge of the University of Florida campus all the way to downtown as early as this fall.

The city of Gainesville is working to create a “wireless canopy” in partnership with the University of Florida.

The project is a part of the greater Strategic Development plan formed a year ago between the city and university. Dan Hoffman, assistant city manager, said there is a memorandum of understanding between the two outlining the parameters for the project, but currently there is no formalized contract.

“This is one small part of the partnership, and a good example of how the city and the university can join forces to acheive mutual goals,” Hoffman said.

The university would not comment on the wireless canopy until the details are finalized.

“…this project’s details are not yet confirmed between the university, GRU, and the city of Gainesville, so we cannot comment on any proposals that may be signed,” said Tracy Gale, spokeswoman for UF Information Technology, in an email.

Hoffman said the project would serve as an expansion of the university’s Eduroam service and provide general Wi-Fi access for the public.

“Eduroam stands for ‘education roaming,’” Gale said. “It is a worldwide, secure, Wi-Fi access service developed for the international research and education community.”

Since UF joined Eduroam in 2014, they have significantly grown the service, making it available at their hospitals, health centers, and Gainesville Regional Airport.

Anyone affiliated with the university can log on to the Eduroam network using their Gatorlink identification and password.

Hoffman said the new network infrastructure will support the Eduroam service, but will also have an internet network available for public access.

There are four access points listed on record by the Broadband Connectivity Subcomittee of the Gainesville City Comission. The main unit is on the roof of City Hall. Three additional units are installed on telephone poles near the ACLD Library, the Hampton Inn and the Hippodrome.

According to an update given in the Broadband Connectivity Subcommittee agenda for their June 25 meeting, each Digital Downtown unit currently has a bandwidth of 75 megabytes per second (mbps). As of Aug. 2017, five mbps were available to each individual user at a time.

The proposed network will extend from the east edge of the UF campus through downtown, including the Porters Community.

Gigi Simmons, chairman of the Porters Community neighborhood association and city commissioner for district one, said she was excited to see the program, which would potentially address some of the problems of inequity facing citizens in the community by providing internet access.

“I think it’s a great partnership and I think it is something that is much needed, because you’re talking about a digital divide, not just in our community, but in the whole country,” Simmons said.

There are also concerns of gentrification associated with the wireless canopy and other proposed improvements to the area.

“It’s a good step towards equity,” said Kali Blount, vice chair of the Alachua County Housing Authority. “My only concern is that these improvements will raise the costs in this neighborhood more quickly than the historic residents can keep up with.”

In addition to covering a broader range, Hoffman said that the new wireless canopy will have a more robust infrastructure than Digital Downtown.

“It will be faster and more people will be able to connect at once,” Hoffman said.

At this time, no blueprints have been drawn up or finalized. However, initial site work has begun with walkthroughs to assess the area.

The speed and cost of the network is still unknown, and the service provider is not finalized. Hoffman said more concrete plans would be made in the next four to six weeks.

Hoffman said the goal of the project is to make downtown a more attractive place to live in and visit.

“Having a vibrant downtown core is essential to having a city that can compete for talent, jobs and investments,” Hoffman said. “By making downtown a more attractive place to live, we also encourage people to live, work and play in close proximity and that in turn reduces congestion.”