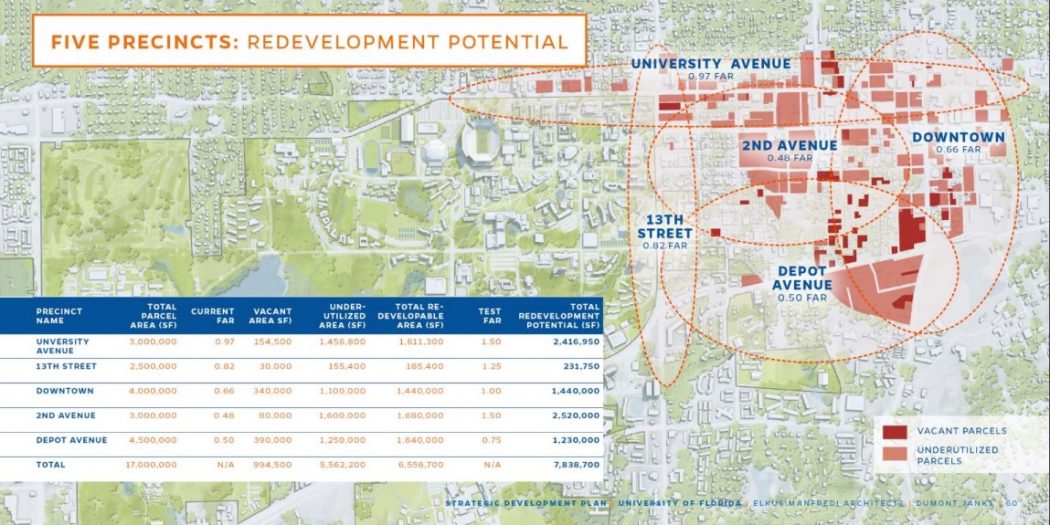 This map details the areas of town that UF’s strategic development plan intends on targeting. With the memorandum of understanding, UF and the city officials will collaborate on development projects of mutual interest.

Commissioners Vote In Support Of UF And Gainesville Planning Agreement

City of Gainesville commissioners voted unanimously Thursday to support Mayor Lauren Poe in signing a memorandum of understanding between the city and the University of Florida to collaborate on development projects.

The understanding will create a formal relationship between the university and the city with the goal of working towards mutual preeminence. According to the memo, areas that the two entities will collaborate on include economic opportunity, business development, housing, neighborhoods, arts and culture, safety, transportation, technology and environmental stewardship.

“There’s some critical needs we’re going to be able to address collaboratively,” Poe said. “That’s what I want to get to work on.”

Both the University of Florida Board of Trustees and the City of Gainesville endorsed respective strategic development plans in December 2016. The each plan discusses future collaboration between the city and the university, which will be carried out through this understanding.

“Growing up in this city, there’s never been this connection I think we have now,” said Adrian Hayes-Santos, a  Gainesville city commissioner.

Not all spoke in favor of the understanding, however, with several citizens stepping forward to express concerns, most of which related to congestion in the northeast corner of the University of Florida campus.

“There is some anxiety in the land, as you know,” said Mark Goldstein, former Gainesville mayor. Goldstein said he was unhappy with the development trend of large, high-rise buildings around campus and in the city.

The understanding is planning-based, and it does not obligate either entity to spend money on projects, according to Carrie Bush, director of strategic initiatives for the City of Gainesville. University of Florida President Kent Fuchs and Mayor Lauren Poe will sign the understanding during the State of the City address Feb. 14.

“The marriage is perfect, the timing is perfect,” said Charlie Lane, chief operating officer at the University of Florida. “Frankly, it’s something that’s been needed for a very long time.”

Anne Marie Tamburro is a reporter for WUFT News and can be reached at 850-324-4389 or amtamburro@ufl.edu.
@amtamburro
Previous Court Rejects Lawsuit Over Local Gun Ordinances
Next UF Team Creates A Computer Model To Help Stroke Patients