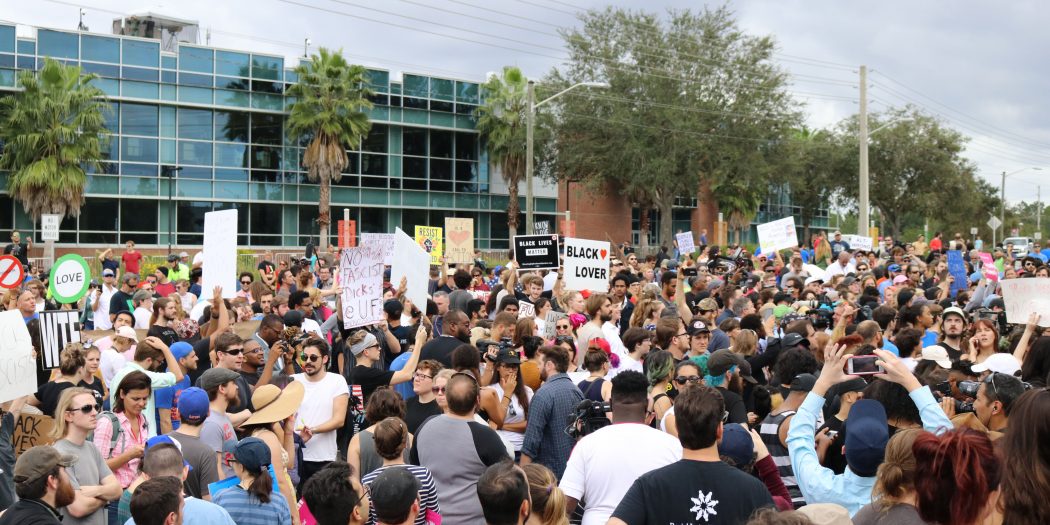 Protesters gather en masse near the Phillips Center at the corner of Bledsoe Drive and Hull Road, waiting to move on where tickets for the Richard Spencer event were being distributed. (Justin Ford/WUFT News)

Updated: January 30, 6:00 p.m.  The University of Florida is asking Alachua County to return the payment it received on Friday for the security costs related to Richard Spencer’s campus visit in October.

The county sent UF a $302K bill in January, asking the university to reimburse event-related expenses.  In an interview with WLRN, UF President Kent Fuchs said he thought the costs associated with the Richard Spencer event was a shared cost between the county, the university and the state.

But Fuchs said the money should not have been sent.

When the invoice from the county was sent to him, he asked his finance people to identify which account or accounts UF would use if it were to pay for it — but he believed it should not have been paid.
“It was misunderstood in that communications that identifying the sources was the same as paying it,” Fuchs said. “That was not the intention, so there was a miscommunication.”

Fuchs said if the university is responsible for these types of costs for programs by outside organizations that rent university facilities, he will rethink the practice.

“Up until the time the county sent this bill for $300,000, I was opposed to changing our policy, even though this individual’s renting of this space was incredibly disruptive to our campus, cost us a lot of money. But if we’re going to have to bear the full cost if we follow the federal law, that just is not sustainable.”

County commissioners briefly raised the topic on Tuesday morning in a meeting, but decided to discuss a resolution in private with Fuchs on Friday. WUFT has requested to attend and listen to that meeting, but has not yet received a response.