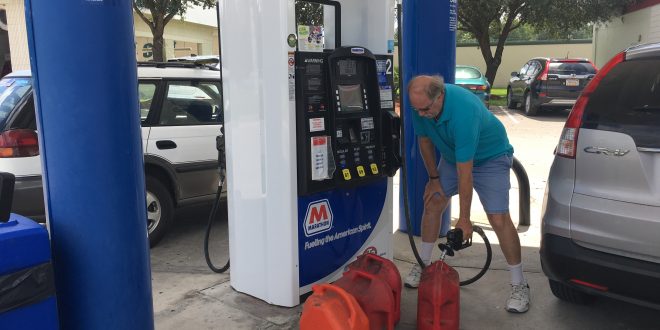 Stephen Maynard, a city of Alachua resident and Duke Energy Florida customer, fills up gas cans Tuesday for his generators, which he has been using for power after Hurricane Irma. Duke expects to have power back for most of its coverage area by this weekend. (Madeline Harlow/WUFT News)

Duke Expects Most Customers To Have Power This Weekend

TALLAHASSEE — Duke Energy Florida expects to restore power to most of its coverage area by this weekend but did not project a date for electricity to come back on in Hardee and Highlands counties, which it described as “severely impacted” by Hurricane Irma.

Across Florida, 5.2 million homes and businesses continued to be without power Tuesday afternoon from the powerful and deadly storm, which made landfall Sunday in Monroe and Collier counties before running up the Gulf Coast and exiting the state Monday.

Federal Emergency Management Agency Administrator Brock Long estimated that almost “every house in the Keys” has been affected by Irma, with about 25 percent destroyed.

The lower Florida Keys remain closed amid concerns about water, sewer systems and the structural integrity of bridges between islands. Meanwhile, in the Northeast corner of the state, large parts of Jacksonville continued to be flooded from the St. Johns River.

For Duke Energy, about 70 percent of its nearly 1.8 million home and business customers remained without power on Tuesday. But a news release late Tuesdayafternoon said a portion of its service area that includes Pinellas and Pasco counties is expected to be restored by the end of Friday.

“Our crews are focused on restoring the largest amount of customers each day and that means some customers will see their service restored much earlier,” Duke Energy Florida President Harry Sideris said in a prepared statement. “As crews respond to make repairs and restore service, specific estimated times of restoration will be updated for individual areas and customers. We have a workforce of more than 12,000 committed to this restoration effort. We are not stopping until the job is complete.”

However, the news release noted that rebuilding the system in the severely impacted areas of Hardee and Highlands County — inland counties east of Sarasota — “may extend beyond Sunday.”

Nearly 100 percent of Duke’s 54,209 customers in Highlands County and all but 10 of the company’s 2,671 customers in Hardee County were offline on Tuesdayafternoon.

Meanwhile, Florida Power & Light spokesman Rob Gould asked customers on Tuesday to be patient as they wait for restoration of electricity.

The company, with more than 20,000 restoration workers, anticipates getting power back by the end of the weekend to most of its customers in eastern parts of Florida.

A deadline of Sept. 22 has been set for restoring power to customers in the company’s western counties, which include all or parts of Manatee, Hardee, Sarasota, DeSoto, Charlotte, Lee, Hendry, Collier and Monroe.

Restoration timelines don’t include homes and areas that were completely destroyed by the storm, which came ashore at 3:35 p.m. on Marco Island, a barrier island south of Naples in Collier County, after earlier making landfall at Cudjoe Key, less than 30 miles northeast of Key West.

Tuesday afternoon, 86 percent of the 210,700 FPL customers in Collier County were without power. Overall, FPL reported that 2.66 million, or 54 percent, of its nearly 5 million home and business customers remained without power.

Tampa Electric still had to reconnect about 260,000 of its 750,000 accounts Tuesday afternoon.

“Restoration will take days — but, thankfully, not weeks,” Tampa Electric President and CEO Gordon Gillette, said in a prepared statement.

Tampa Electric said power had already been restored to about 20 percent of its customers who had been impacted. Statewide, electricity has been restored to more than 1.5 million homes and businesses.

The News Service of Florida is a wire service to which WUFT News subscribes.
Previous Gas Shortages Continue In Alachua County After Irma
Next Hurricane Irma Wrecks Tourist Spots In Caribbean, Spares Disney