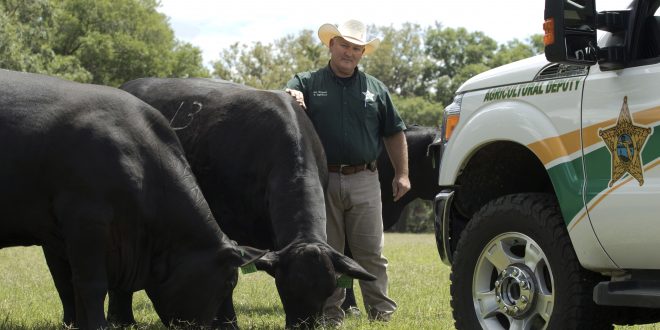 By Kayla Ziadie and Brianda Villegas

The Marion County Sheriff’s Office announced Wednesday that it will be assigning a deputy to agricultural duties, such as assisting with missing or loose livestock, helping the county’s animal-control employees and investigating stolen farm equipment.

An existing deputy, Cpl. Tim Ogletree, who has an agricultural background, will be taking on the role, which has him serving as the sole full-time deputy with the office’s agricultural unit. Before, deputies would often work an agricultural shift about once a week.

“There’s criminal mischief where somebody has damaged the property. There’s thefts and burglaries where people break into farms and steal equipment,” Ogletree said in an interview. “[People] have also been known to steal animals from farms.”

Marion County’s annual revenue from agricultural exports from its 3,500-plus farms is about $188 million, which is the highest in North Central Florida, according to a news release from the sheriff’s office.

Doug Russell, who owns Triple R. Farm in Ocala, said he looks forward to having an agricultural-focused deputy, especially after a car ran into his horses’ fence in March and he hasn’t heard back from Florida Highway Patrol troopers about the incident.

“It will be nice because then you have somebody you can actually go to,” he said. “What happens a lot of times is that [law enforcement will] send you here, send you there, send you here before you really get ahold of somebody that will help you.”

Numerous Florida counties already have agricultural units and deputies, Ogletree said. Another duty he’ll be focused on is creating and maintaining the office’s new Ag Watch program, which allows farmers and ranchers to register their animals and property to help them get it back in cases of, for example, escape or theft.

The program also allows farm owners and other county residents who might see a problem at a farm to contact Ogletree directly through his cell phone or email.

“When people who own a farm have a problem, they need to be able to pick up the phone and talk directly to somebody and explain whatever their issue is,” he said.

In addition, the Ag Watch program will provide farmers with a sign that they can post on their gates that lists the non-emergency phone number for sheriff’s office’s as well as a number specifically registered to that farm.

If there is ever a problem, anyone driving by will be able to contact the sheriff’s office and use the code to direct deputies to the farm.

Bill Ellis, owner of Four Winds Farm in Ocala, said he’s thankful for the new agricultural efforts from the sheriff’s office because it’ll help him protect his horses.

“Anything we can do to protect the property and especially the animals” is a good thing, he said.

Often, horse farms like Ellis’ are only steps away from busy and congested roads, Ogletree said, and this brings danger to the animals and their owners.

“These animals are these people’s livelihood,” he said. “This is what they do. If something were to happen, we want to open a line of communication, no matter who’s there to preserve the animal’s life.”

This article has been updated to include comments from farmers and additional ones from Ogletree.