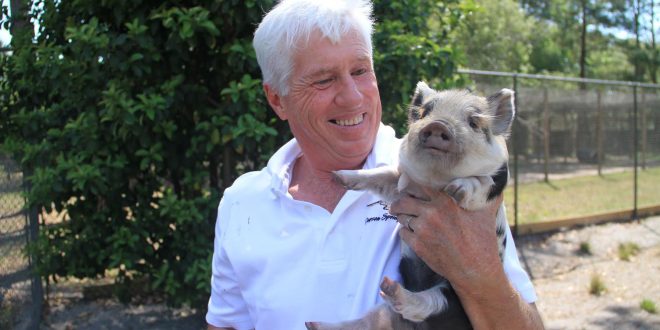 Barry Janks holds one of Carson Springs Wildlife Conservation Foundation's kunekune pigs. Janks and his wife, Christine, run the Alachua County ranch, which is home to 28 species and 60-plus animals. (Nikhil Srinivasan/WUFT News)

Barry and Christine Janks began their wild journey together at a racetrack in their home state of Illinois.

Barry was a jockey agent, and Christine was a horse trainer who was upset at Barry’s jockey.

“When he said who his jockey was, I said, ‘Get out of here! I never want to hear that name again!’” Christine Janks said.

Despite the rocky first meeting, the two hit it off and got married in 1985, sticking to horse racing all the while. Six years before their wedding, they purchased 274 acres in northeast Alachua County and leased it out until they began breeding and selling racehorses there in 2001.

But today, it’s not just horses that first catch visitors’ eyes as they step onto the ranch. Instead, maybe it’s Henry the Indian rhino, Sugarbear the redruffed lemur or Mocha the cougar.

This diversity in rescued wildlife lives under the name the Carson Springs Wildlife Conservation Foundation.

The journey to obtaining exotic wildlife started in 2001, when Christine decided she wanted to pet a cheetah. After doing some research, she and Barry decided to go to South Africa’s Dewildt Cheetah Sanctuary, run by Ann Van Dyk. They booked their tickets on Sept. 10, 2001.

Naturally, the couple was apprehensive following the Sept. 11 attacks, but Christine declared, “I’m not going to let terrorists ruin my plans.” And so they flew to Africa on their scheduled flight that October.

The Jankses paid to symbolically adopt a cheetah at Dewildt, but they were initially told that they wouldn’t be able to touch any animals there.

Christine saw Van Dyk behind a fence, ran up to her and explained the situation. Van Dyk then took the couple inside the cage of one their king cheetahs and let them pet the cat.

“You got to make the leap in life if you want to get things,” Christine said. “If you never ask, the answer’s never going to be yes.”

The king-cheetah incident sparked the couple’s spirit for exotic animals, and they bought a 2,000-acre plot north of Johannesburg, South Africa, in 2003 for land on which to take care of retired cheetahs, wild dogs, giraffes and other animals.

But they were still involved with the horse racing in Chicago and Florida, so they spent their time traveling between the three locations.

The traveling — which included 17-hour nonstop flights to South Africa two or three times a year — eventually took its toll. So the couple sold the Johannesburg property to Van Dyk in 2007.

After the sale, the couple still went back and forth between Alachua County and Chicago until 2008, when they moved to Florida permanently.

“We decided to do, essentially, the same thing that we were doing in South Africa here alongside the horses, and we gradually phased out the horses,” Christine said.

Carson Springs began with one cat, a serval named Tocatta, and it now has 28 species and more than 60 animals, including lions, tigers, lemurs, a rhino and a giraffe. Some come from roadside zoos, some from other zoos that are closing down, and some from lives as pets.

But the road to building a comfortable home for the animals hasn’t always been easy.

Struggling with alcohol addiction, Barry became self-destructive, but after checking into rehab and focusing his attention on animals, his life changed.

“I was the kind of person who nothing really meant anything [to]: just make money, do whatever you want, all about me,” Barry said. “Now it’s the complete opposite. Now I’m just mad I didn’t save any of that money.”

Christine remained a source of strength and stability for her husband as he recovered, but she said that she felt helpless all the while.

“When you love somebody and you’re watching them kill themselves, literally … you’re trying to stop it but you can’t,” Christine said. “Nobody can change another person. We can only change ourselves.”

And change Barry has.

“He does have a compulsive personality, which, now that he’s clean and sober, has translated into an obsession with the animals,” Christine said.

Such dedication is easily apparent in the couple, according to Shelby Groves, Carson Springs’ head keeper.

“You can see the passion they have for these animals,” she said. “This is their entire life.”

The Carson Springs Wildlife Conservation Foundation is registered as a nonprofit organization and is sustained entirely by private donations.

The ranch is set to have an open house April 8 from 10 a.m. to 3 p.m. The event will feature three food trucks, face painting and a chance to feed Henry the rhino. Attendees will be able to walk throughout the entire property as opposed to the regular organized tours.

They will also have the option of making donations or buying merchandise from the gift shop.

“I know there are people who think, ‘Well, what’s $5 going to do?’” Christine said. “But if everyone thought that, we can’t feed the animals. It all adds up.”

The foundation has an annual operating costs of $300,000, and open houses like the one in April help generate some of that revenue. At the spring 2016 open house, it received $19,000 in donations.

Besides the Jankses, the foundation has five employees and a daily volunteer force of at least one or two.

“Me and Christine have never taken a salary,” Barry said. “If I was getting a million dollars in, it would all go to the animals. Nothing’s coming to me.”

Carson Springs also conducts two or three school tours a week from February through July. Barry said that this combination of helping animals and educating future generations has renewed his passion for life.

“I have a total purpose in life,” he said. “I feel like every morning, I get up and it’s just [about] another animal I can go out and take care of and do stuff with. And that’s a reward.”

Nikhil Srinivasan is a reporter at WUFT News. You can reach me at niksri13@ufl.edu or (352) 727 8145.
@@NikhilSriniva13
Previous Gainesville Homeless Center To Provide Shelter During Tonight’s Bad Weather
Next State Bill Sets Up Possible Local Battle Over GRU Governance