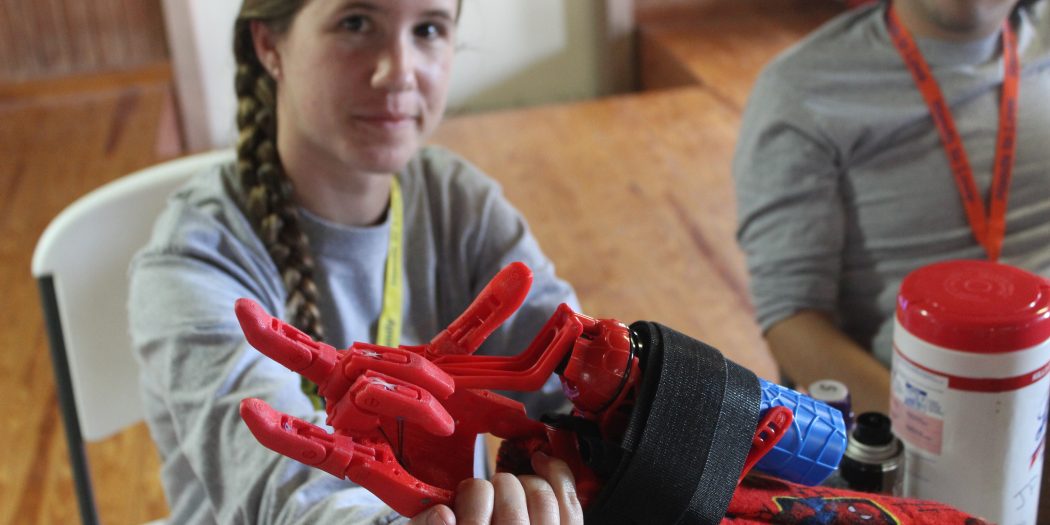 Jamie Paulus, a member of UF GRiP, holds a Spiderman-themed prosthetic device that she and her team created. To use the device, participants put their arm into the sleeve and bent their elbow, which caused the fingers on the device to press a button that shoots water. (Carly Breit/WUFT News)

With 3-D Printing, UF Students Give A GRiP To Hand Camp Kids

Jonathon Podber, 10, strummed Deep Purple’s “Smoke on the Water” on an electric guitar Saturday afternoon. As he played, members of UF GRiP, a University of Florida club that creates 3-D printed prosthetics, bobbed their heads to the beat.

Podber has a transverse deficiency, which means he was born without a hand on his right arm. He was one of more than 70 kids at Hand Camp, a camp for children with upper-limb differences and their families, in Starke, Florida.

When Podber noticed that his right residual, or “nub,” as he called it, was hurting from the guitar strings, Meggie Pires-Fernandes, a UF student and member of GRiP, realized that one of the prosthetics the club created might help.

She helped him slip his arm into a bright-orange device with a guitar pick attached. Podber continued to strum the guitar using the device, as his parents snapped photos, before moving on to the piano and Ping-Pong table.

Brian Podber, Jonathon’s dad, said his son doesn’t let his differences slow him down. This was his seventh time attending Hand Camp, and in addition to playing sports and music, he climbed the rock wall — twice.

“I couldn’t do it once!”Jonathon said.

Samantha Haus, the club’s vice president, said the guitar-pick device he used was one of several prosthetics that members designed and printed with a 3-D printer for Hand Camp participants. The UF biomedical engineering senior said the club has brought different prosthetics to four bi-annual camps.

During the weekend-long camp, kids and their families participate in activities like rock-climbing, basketball and STEM experiments. Along with showing off new prosthetics, the club members brought a 3-D printer to show participants how it works.

“They get to go to camp with kids that are like them,” Haus said.

Among the other creations were a fishing-pole holder, Ping-Pong paddle and Spiderman-themed water gun.

Jessica Bergau, the president of GRiP, said as the club continues to attend the camp, the prosthetics continue to evolve.

“We see the same kids come back year after year so we can get their opinion about this device versus this new model device,” Bergau said.

The fishing pole the club created was inspired by a participant at a previous camp who wanted to try fishing, she said.

“We can produce them relatively quickly, so the kids are growing up, their sizes are changing,” she said. “You can make them new devices that fit correctly.”

When 3-D printing was invented, she said, its purpose was to help manufacturers test out pieces of products in plastic before getting them made in the correct material, like metal, which can be expensive.

The technology is perfect for prosthetics because it can create devices quickly, she said. It can help the GRiP team members make devices for specific tasks that campers want to accomplish with more ease.

“The kids are so capable, most of them don’t need anything at all,” she said. “But they’ll have one or two tasks that they have some difficulty with.”

Functionality aside, aesthetics are sometimes of greater importance to the kids, she said. The Spiderman-themed prosthetic, which can help participants without fingers shoot water at their friends, was a hit at this year’s camp.

“We get a lot of stuff about confidence,” she said. “About how having something that’s a cool color, they want to show it off to their friends.”

Carly Breit is a reporter at WUFT News. She can be reached at 954-892-2308 or carlybreit@gmail.com.
@@The_Breit_Side
Previous Changes To Best And Brightest Program Would Give More Educators Chance At Bonus
Next Key West Police Release Footage of UF Student Body President-Elect’s Arrest