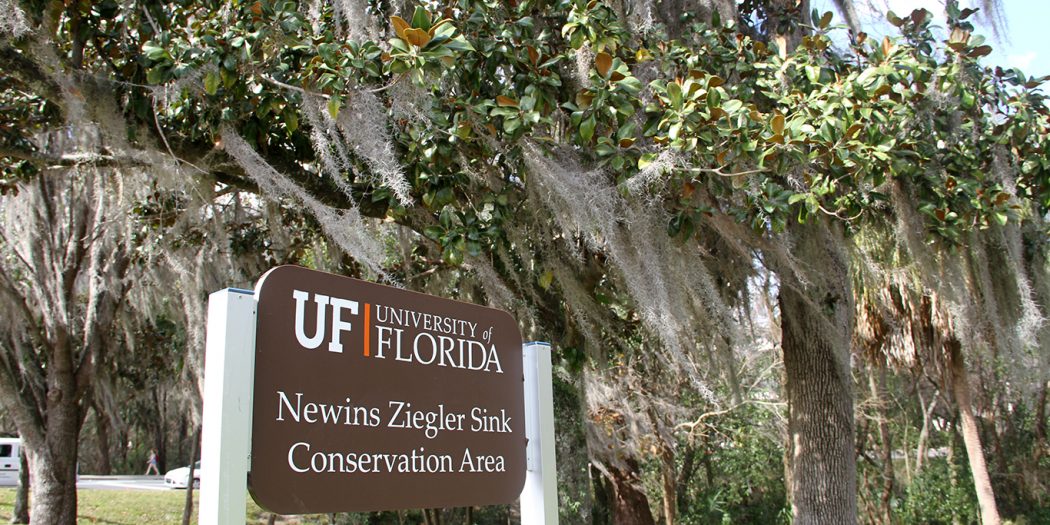 The Newins Ziegler Sink Conservation Area is located by the Reitz Union and is open to all students to venture. It is adjacent to the Forest Resources & Conservation and Wildlife Ecology & Conservation building on Museum Road (Cindy Lu/WUFT).

In light of recent changes to national environmental policy, there has been increased concern among the scientific community, specifically regarding climate change, conservation and sustainability. Activists are calling for a nationwide rally to voice their concerns and UF students plan to take part on a local level.

The March for Science on Washington, scheduled to take place on April 22 – Earth Day – will serve as a celebration of the scientific community as well as a call for protecting the validity of environmental research. Since President Donald Trump has taken office, various changes made to environmental policy, particularly with Scott Pruitt’s appointment to head of the Environmental Protection Agency, have sparked public debate.

Although the official march is based in Washington, D.C., dozens of satellite marches are beginning to emerge throughout the country, which is a chance for those who cannot make it to Washington to participate in the movement.

Juan Zapata, a third-year electrical engineering major at the University of Florida, is heading the UF/Gainesville March for Science.

“I study electrical engineering so that I can hopefully work with… progressing our technology toward a sustainable path,” he said. “I’m also very adamant about a lot of social issues. [The march] combined everything that I am passionate about, so I jumped on it immediately.”

Zapata first heard of efforts for the march from a newsletter by 341 Action, a partner of the national March for Science. From there, he started Twitter and Facebook pages as well as a listserv for a UF march, setting the foundations for a Gainesville rally.

Marcela Mulholland, a second-year political science and sustainability studies double major at UF, has been working as a volunteer to obtain permits, make reservations and contact local authorities to finalize logistics for the march.

“We now have officials in the highest offices of government who are climate deniers and reject the overwhelming scientific consensus about climate change and its human cause,” she said. “We should create a platform for people to have their voices heard.”

According to Mulholland, the rally will take place the same day as the national protest and will feature guest speakers, local organizations and activities for attendees to take action.

JeanCarlos Asencio, a third-year aerospace engineering major, is taking his efforts to join the march all the way to Washington. He said he is currently working to get a bus to take students to Washington in April.

“We basically have the whole world going behind this whole environmental reform,” Asencio said, referencing China’s recent increase in sustainability efforts and the Paris Treaty. “I just really would not want to see America, one of the world’s greatest leaders, get behind on that.”

Lisa Matthies-Barnes, 26, a Gainesville resident, hopes to attend the march in Washington, D.C. in April as well.

“We can’t really make any forward momentum without science,” she said. “It’s important to be the stewards of science when we can.”

While plans for the Gainesville March for Science are only beginning to form, support for the cause is gaining momentum.

Brittany Panos, a UF senior wildlife ecology and conservation major, volunteers as an outreach coordinator for UF’s march. She is hoping to bring a diverse crowd to the local event.

“This is not a march just for scientists,” Panos said. “Science is science; it doesn’t matter who you are.”

I am a second-year journalism student at the University of Florida focusing on online media and entertainment reporting. I hope to work in social media and magazine writing after graduation.
Previous Feb. 9, 2017: Afternoon News In 90
Next Unpaved Road In Newberry Threat To Safety, Health, Some Residents Say