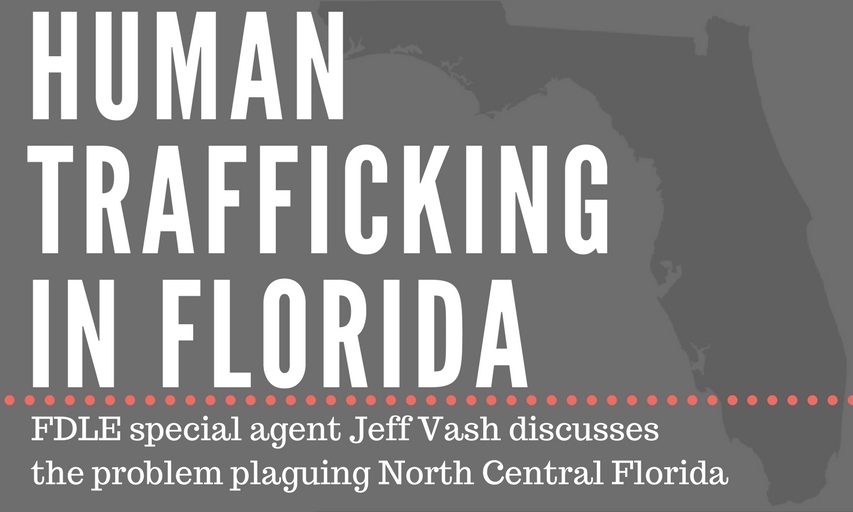 Every year thousands of men, women and children are pushed into a life of involuntary servitude, funding a multibillion-dollar industry some refer to as as ‘modern-day slavery.’

According to the National Human Trafficking Hotline, 7,572 human trafficking cases were reported in the U.S. during 2016, which is an increase of more than 2,000 reported cases in 2015.

While women are predominantly affected, men and gender minorities also suffer at the hands of traffickers. Additionally, men and women 18 and older are the primary victims of human trafficking, with 379 cases reported in Florida, as opposed to 169 cases in which minors have been involved.

With such a high number of reported trafficking instances and an even higher number of unreported cases, it is important to understand the intricacies of the trafficking world and the signs that may indicate a person is being exploited.

Jeff Vash, a special agent with the Florida Department of Law Enforcement (FDLE), has worked as an officer for 33 years, 23 of which he has served as an investigator. For the past three years, Vash has investigated human trafficking cases in the Jacksonville region of FDLE, covering several counties in North Central Florida, including Alachua, Ocala and Marion counties.

WUFT News reporter Katie Mellinger sat down with Vash as he detailed his experiences investigating human trafficking cases in Florida, as well as offered information regarding how you can help victims and survivors in your community.

Q: When did you begin investigating human trafficking cases?

Vash: “About three years ago the commissioner revamped the intelligence unit for FDLE, and what he wanted us to do was to take a look at the major crimes that were affecting the state, and one of those major crimes was human trafficking. We were ranked No. 3 in the country for human trafficking, but they weren’t seeing a lot of prosecutions around the state, and the commissioner wanted to know why.”

Q: What training did you go through to investigate these types of cases?

Vash: “There is some online training that FDLE has. There’s a lot of training with senior agents who had done this before. I got my first real exposure working with homeland security investigators who had done human trafficking cases before, and I cut my first teeth on a case that they had that impacted Gainesville.”

Q: How many human trafficking cases have you prosecuted in the past three years?

Q: How many tips have you received in the past few months?

Vash: “Last week, I got about five tips. In the past few months, we have probably seen 20 to 30 tips come in about human trafficking, which is more than usual. I think the awareness is definitely up in the community.”

Q: What type of human trafficking is most prevalent in North Central Florida?

Vash: “From what I’m seeing commercial sex trafficking is the most common. We have had some reports of labor trafficking, none that we’ve been able to really do much with.”

Q: In which counties do you investigate human trafficking cases?

Q: Who are the typical victims of human trafficking in the counties you represent?

Vash: “I’ve had no males. In the cases I’ve investigated, the victims are females, younger, between 14 and 30 primarily, and those are the ones that are primarily being trafficked out there commercially for sex trafficking.”

Q: Why are these victims the primary targets of traffickers?

Vash: “That’s what the market is looking for. I think they’re looking for young women in that age range, and that’s what sells, unfortunately.”

Q: How are victims typically drawn into the trafficking lifestyle?

Vash: “A number of different ways from what I’ve seen. Most of them come from homes where they had problems growing up. Some are runaways, have had minor problems with the department of juvenile justice, minor offenses.”

Q: How many people are victims typically forced to sleep with a night?

Vash: “Working with the FBI, we’ve interviewed a number of these girls, and to listen to them talk about the number of men they have to sleep with a night is just astounding. I’ve had some of the victims tell me 40 to 50 a night.”

Q: Where and when are victims sold in Gainesville?

Vash: “A lot of the business is conducted at local hotels and motels… Listening to the victims, their busy times are when we are busy here in Gainesville.”

Q: Who are the typical clientele?

Vash: “The typical clientele is really anybody…In speaking with the victims and doing surveillance, we’ve seen them in shadier areas of town, upper-class areas and then very upper-class areas. It’s everywhere.”

Q: What can you look for to determine if someone may be experiencing exploitation?

Vash: “I can give you a scenario. If you are staying at a hotel and you notice very young women in a hotel room with a constant influx of older men coming and going from the hotel room, would be one sign. Things that look out of place. If you see a very young girl with a much older man and they don’t appear to be related, that might be something to look for. It’s not really that obvious. These traffickers are smart. They’re not leaving obvious signs of bruising and beating most of the time. They know enough to pull the hair out in the back of their head or to choke them out where it’s not going to leave marks or body shots so you are not going to see the bruising or anything else.”

Q: What are behavioral signs that indicate a person is being trafficked?

Vash: “What we see with the young victims is most of the time they have involvement with the juvenile justice system. They have self-esteem issues and behavioral changes.”

Q: What response can you expect from law enforcement, and how long does it take?

Vash: “Local law enforcement response time would vary on their call loads. They are going to go to priority calls first. Sometimes it is very hard and nothing will happen, but sometimes that might be enough to trigger an investigation to open the door, and maybe successfully rescue a victim and take a trafficker off the street.”

Q: What can the public do to prevent human trafficking?

Q: What role does social media play in human trafficking?

Vash: “There’s a number of different sites that traffickers are using to post ads for the victim…We have to go in a case by case basis.”

Q: How can victims of human trafficking help themselves get out of the lifestyle?

Vash: “It’s a difficult thing to get out. Get out any way you can. Law enforcement is not going to look at you as being in trouble or committing a crime. We are going to be there to try to help you as a victim.”

For a first-hand account from a victim of human trafficking, read Savannah Parvu’s story:  Stolen Youth: “My Mom Sold Me For Drugs.”

Katie is a reporter at WUFT News who can be contacted by email at kmellinger13@ufl.edu.
@@kmellinger13
Previous Prescribed Burn May Affect Conditions On I-75 In Marion County
Next Betsy DeVos Confirmed As Education Secretary