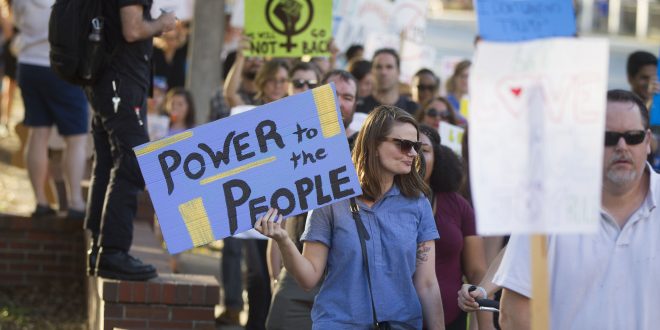 A woman holds a sign reading "Power to the People" as anti-Donald Trump protestors march along University Avenue in Gainesville in November 2016. The same group that organized that protest has put together another to coincide with Trump's inauguration Friday. (File/WUFT News)

Gainesville organizers are preparing a protest to coincide with Donald Trump’s inauguration on Friday.

The event — titled the “Peoples Inauguration” and organized by the Gainesville City of Resistance group — will take place on the steps of City Hall Friday from 11:45 a.m. to 6 p.m.

The Gainesville event’s closing ceremony will begin at 5 p.m. and will include a speech from Ibram Kendi, winner of the National Book Award for “Stamped From the Beginning: The Definitive History of Racist Ideas in America” and an assistant professor of African-American history at the University of Florida.

Gwendolyn Zoharah Simmons, a UF assistant professor of religion and member of the civil rights group National Council of Elders, is set to speak at the beginning of the event.

“We are gathering progressives, activists, singers, poets and others to give a progressive vision of what we want to see happen in our nation, here in our city and in the state,” she told WUFT News.

Simmons, who was a member of the Student Non-Violent Coordinating Committee during her youth and marched with Martin Luther King Jr., said that she is worried that Trump’s policies will move America back into a darker period of its history.

While no political figures have confirmed they’ll certainly attend, Gainesville Mayor Lauren Poe has said he will try to, Simmons said.

She said Poe was the first person to sign the group’s “Freedom from Fear Pledge,” a document that has the signee commit to “keep my community guided by the values of equality, justice, inclusion and openness.”

But City Commissioner Todd Chase, who was also presented with the pledge, said he doesn’t agree with it and didn’t sign it. He said that he does not need to sign a document to reinforce his own beliefs.

“I’m certainly not perfect,” he told WUFT News in an email, “but I just don’t see the need to sign a pledge that effectively seems to attempt to help define one’s core. I am comfortable and happy with who I am and what I think.”

In a Jan. 6 response to an email from the organizers asking him to sign the pledge, Chase said he was “afraid it will do nothing more than be a divisive distraction to Gainesville.”

But Jeremiah Tattersall, a field staffer for the North Central Florida Central Labor Council and an organizer for City of Resistance, said it’s not the document that’s divisive but rather Chase.

“Do unto others as you wish to be done unto you,” Tattersall said of the pledge’s meaning.

Regarding Friday’s protest and its focus on more on national issues, Chase said his job does not focus on Trump’s agenda but rather local issues.

“I have never viewed my role as a city commissioner as more than concentrating on the local issues that affect the daily lives of our citizens and have always tried to steer away from the divisive national politics that seem to occupy the minds of many,” he wrote.

“I happen to have a very busy job in addition to my role as a city commissioner and will be working all day Friday,” he wrote.

Timothy Tia, an economics student at UF and a lead organizer for the Friday’s protest, said a major goal of his for the event is to get young people involved.

“There’s a stereotype that college students and millennials don’t vote, they don’t get involved,” he said. “I just want to show that there are ways for them to get involved in the community and contribute to issues that they care about.”

City of Resistance’s last major event was its Freedom from Fear march in November 2016, when about 1,000 or so marched in opposition to Trump’s election. A few Trump counter-protesting supporters lined the march, but organizers said they don’t expect anything similar Friday.

Chase said he supports the group’s right to protest.

“While I certainly find it a bit ironic that a group of people have decided to promote unity under the title City of Resistance, that is their right, and I support that right,” he wrote.

Tattersall described Friday’s protest as the best way to start off a new coalition in opposition to Trump.

“It’s important for progressives to come together in solidarity under the Trump administration,” he wrote in a City of Resistance news release on the protest. “What better time than to start the second he’s sworn in?”

Turner F. Street is a reporter for WUFT and can be reached at turners@ufl.edu or 904-382-9272.
@@TurnerStreet
Previous Study: Gainesville Businesses Paying Much More Than Others In U.S.
Next Jan. 19, 2017: Afternoon News In 90