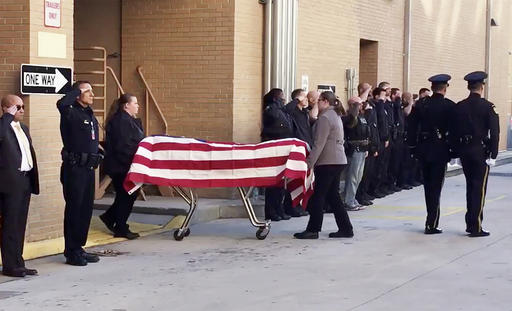 A massive manhunt is underway in central Florida as authorities searched for a man accused of shooting and killing an Orlando police officer.

The Orlando Police Department announced the death of Master Sgt. Debra Clayton on its official Twitter account Monday morning. A short time later, authorities said at a press conference that a second law enforcement officer was killed in a vehicle accident while searching for the suspect in Clayton’s killing.

The shooting occurred near a Walmart store in northwest Orlando earlier Monday.

The suspect has been identified as Markeith Loyd, 41. Authorities said Loyd previously was a suspect in the murder of his pregnant ex-girlfriend last December.

Authorities were offering a $60,000 reward for any information leading to Loyd’s arrest. Orange County Sheriff Jerry Demings said deputies had been searching unsuccessfully for Loyd for several weeks and believe he was receiving help from someone.

“He should be considered armed and dangerous,” said Police Chief John Mina said at a press conference. “He will be brought to justice.”

Mina lauded Clayton, a 17-year veteran of the force as a “committed” officer and “a hero” who gave her life to the community she loves. The tweet said Clayton always had a smile and a high five for every child she came across.

“She made a point, even outside her working hours, do to things for youth and do things for the community,” said Deputy Chief Orlando Rolon, who added he assumed she was wearing a bulletproof vest since that is agency policy.

She was married and had two children. She died Monday at 7:40 a.m., less than an hour after she was shot while on duty.

Police released a video of Clayton’s body being taken out of the hospital to a waiting van in a flag-covered stretcher. A line of officers saluted as the stretcher was wheeled out.

“There will be a large law enforcement presence in that area until we can determine he is not there,” Mina said.

Orlando Mayor Buddy Dyer declared a day of mourning in the city.

Clayton either recognized Loyd or had been tipped off to his whereabouts when she approached him Monday morning, Mina said.

Loyd then fired multiple shots at Clayton, according to the police.

Sheriff’s officials said Loyd was spotted by a deputy fleeing in the Orlando police officer’s vehicle. The suspect pulled into a nearby apartment complex and then fired at a deputy, striking the deputy’s SUV twice. The deputy wasn’t harmed, the sheriff’s office said.

Loyd then carjacked another vehicle, drove away and then abandoned the vehicle not far away, according to the sheriff’s office.

The manhunt was being conducted where he abandoned the vehicle.

Gov. Rick Scott cancelled an appearance in Orlando because of the shooting but appeared with Orlando officials at the news conference.

Authorities in Orlando say that an Orange County deputy sheriff was killed in a traffic accident while searching for a suspect in the shooting death of an Orlando police officer Monday.

Sheriff Jerry Demings told a press conference that the deputy sheriff was riding a motorcycle while pursuing Markeith Loyd, 41. Loyd is suspected in the shooting death of Master Sgt. Debra Clayton. A massive manhunt was underway for him Monday.

Orlando police say the officer who was shot while on duty has died. A manhunt is still underway for the suspect.

The Orange County Sheriff’s Office in Florida says it’s conducting a massive manhunt for a suspect in the shooting of an Orlando police officer.

The sheriff’s office said Monday it was searching for 41-year-old Markeith Lloyd in an area of northwest metro Orlando.

Some area schools were on lockdown.

The Orlando Police Department identified Lloyd as the suspect in the shooting Monday morning of the Orlando police officer near a Wal-Mart store.

No additional details were provided about the shooting or the condition of the officer.

At least seven Orlando police officers and Orange County Sheriff’s deputies were seen escorting an ambulance carrying the officer to the hospital shortly after the shooting, according to a report by the Orlando Sentinel.

Traffic has been detoured around the area.

This story will be updated as information becomes available.

Marion County Sheriff Bans Masks For Deputies, With Some Exceptions

Jennifer Mccray Littles spends the days awaiting progress in the criminal trial against former detention officer Jerome Ulrich for charges of battery and tampering with a victim — her son, Joseph Combs.