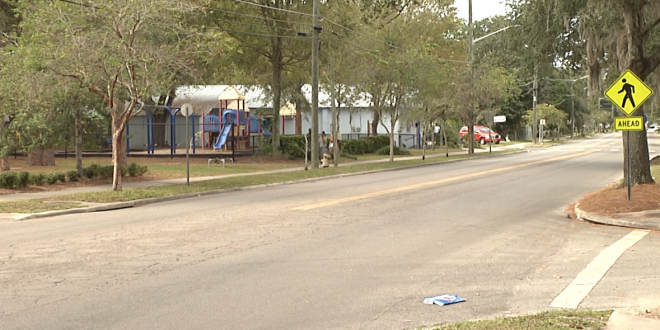 Residents in Gainesville's Duval community say it's had a history of crime. Police are receiving more reports of violence. (Allison Valdez/ WUFT News)

In response to an increase in violent crime, burglaries and community members’ requests for more law enforcement presence, Gainesville police will be increasing their patrols in the Duval area and Northwest 16th Avenue and Northwest 6th Street corridors.

A post on GPD’s Facebook page aimed to alert the public in advance, but the increase hasn’t been well-received by all.

“They’re on their side. We by ourselves,” said Duval resident Gregory Drayton. “If I call, they’ll be against me. They’ll be stereotyping just because of how I dress,” he says. “They get under our skin. They come out here and say they’re patrolling, but they really just invade. They tell grown people to go home telling us we can’t be out past twelve. I work in the mornings I stay out all night because this is my only free time.”

But attitudes such as Drayton’s aren’t anything new to Gainesville police, said Sgt. Charlie Ward, with the Gainesville Police Department’s Special Operations Unit.

“I hear complaints of our team being out in areas so heavily,” he said. “They don’t understand why.”

Gainesville police are posting on Facebook and other platforms to increase transparency and hopefully ease the tension, Ward said.

“The ones that don’t want us there, they can at least see we’re trying to impede crime from occurring and be open about it,” he said. “It’s nothing secretive.”

Residents of Gardenia Gardens apartments said the crime situation has improved over the past several years, but it’s still not the safest area.

Crystal Taylor has lived at Gardenia Gardens for six years, but she doesn’t plan on staying there much longer.

“When I first got out here, there was fighting every day,” she said. “They used to argue all the time. Then it kind of slowed down. We had a couple shootings in these apartments.”

Taylor said many of the newer tenants keep to themselves and stay indoors.

Gainesville police say crime ebbs and flows, but a recent uptick in the Duval community has caught the department’s attention.

“There’s been a spike in burglaries over the last three to four weeks,” Ward said. “On top of that, there’s even been two armed home invasions where someone ended up getting shot.”

These numbers highlight only the crimes that were reported. Ward said that on occasion, Gainesville police’s gang unit receives word that there are more crimes.

“We don’t know about these [incidents] because they’re not reported to us,” he said, “but the residents out there hear and see it.”

Police spokesman Ben Tobias said that the community can contribute to combating crime.

“The public is the eyes and ears of the police department,” he said. “There are only 302 of us, and Gainesville is a big place. People that live in these areas know it better than any officer ever could. So we need people in the neighborhood to call us whenever they see something out of place.”

Tenants believe new management at Gardenia Gardens has helped in cleaning up the crime there.

“They’ve evicted a lot of people,” Taylor said. “A lot of people that used to come here are arrested now. They’re either in jail or prison or probably don’t take interest in being out here. There’s a lot of new faces.”

Another tenant, Robert Rush, has been in and out of the complex since the early 2000s. He said he noticed the differences over time and how quiet it has become. Many of the doors and gates are now locked, he said.

“It’s a lot of change,” he said. “Out here, people are just living, surviving. We’re already living in poverty as it is. It’s the people that make a difference. … You respect somebody, they’re going to respect you.”

Gardenia Gardens management declined to comment, but police said they are one of several places that have requested more support from the department.

Taylor said she has noticed more police in her neighborhood and believes it’s helped alleviate crime. But she wishes they’d patrol more often in the later hours of the night, when violence is more likely to occur.

Nevertheless, she said she’s happy police drive through on patrol.

“Some nights, they come maybe 6, 7 o’clock until 10 or 11 at night, patrolling the areas,” Taylor said. “They come out, play with the kids. Some of them actually come to the house and check on them. I think that’s pretty good, especially for the kids that maybe don’t have mothers or father figures around.”

Tobias said police do more than make arrests and put people in jail, saying they embed themselves in the community.

“Our officers aren’t just locking someone up and driving away not to see the neighborhood again,” he said. “They’re meeting with the residents to find out what their concerns are, even if they’re not law enforcement-related.”

Tobias pointed to ongoing projects like the Duval Initiative as an example of how Gainesville police are working to revitalize the eastern part of the city while also creating a stronger relationship between residents and police.

“People want to live in a safe community,” he said. “Everybody does, no matter where you are.”

Allison is a reporter for WUFT News and can be contacted by calling 352-392-6397 or emailing news@wuft.org.
@allisonvaldez17
Previous Oct. 27, 2016: Afternoon News in 90
Next Camp Blanding Honors Vietnam Veterans At Annual Veteran’s Day Ceremony