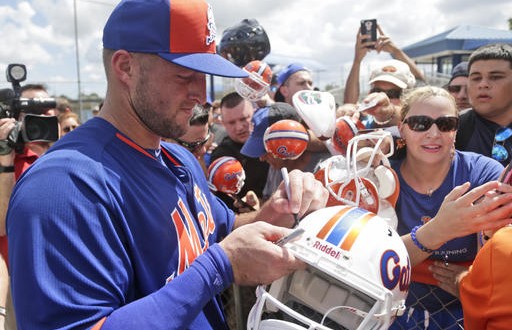 SCOTTSDALE, Ariz. — Tim Tebow hit a ball through the left side of the infield and looped another to the same area. He fouled off a pitch and sent a grounder the other way.

Then it came. Swinging inside-out, Tebow lined a hard shot toward the line in left field.

“Atta boy,” one of his new teammates shouted from behind the batting cage.

Tebow’s journey from star quarterback to budding baseball player made its latest stop in the desert Monday night, when he worked out for two hours with the Arizona Fall League’s Scottsdale Scorpions.

Playing baseball under the lights for the first time in more than a decade, Tebow took some fly balls in the outfield and went through five rounds of batting practice. He hit some good, some not-so-good — but he’s still early in this transformation from football to baseball.

“It was good getting in here, meeting everybody, getting a feel for it, swing the bat a little,” Tebow said. “I know it’s going to be a process.”

Tebow was one of the best quarterbacks in college football at Florida, winning a pair of national championships and the 2007 Heisman Trophy. He played three seasons with the Denver Broncos and New York Jets before his NFL career petered out.

Tebow moved on to become an analyst for the SEC Network and announced last month that he would pursue a professional baseball career. Though he had not played competitive baseball since his senior year in high school, the New York Mets took a chance on Tebow, signing him to a minor league contract and hoping his exceptional athletic ability would translate to the baseball diamond.

The 29-year-old Tebow hit a home run on the first pitch he saw in the Florida instructional league and went 4 for 14 in three games before the league was cut short due to Hurricane Matthew.

The move to the Arizona Fall League will be a big step up in competition.

The league is filled with promising minor leaguers who are there to get more seasoning, a stopping point for former No. 1 draft picks Stephen Strasburg and Bryce Harper. Michael Jordan also appeared in the AFL when he made his brief foray into baseball in 1994, and this year’s league includes Boston Red Sox infielder Yoan Moncada, rated the top overall prospect in baseball.

“There’s a lot of great players out here, so for me it’s about working hard and trying to improve, get better and remember it’s a process,” Tebow said. “But also to enjoy it. It’s fun to come out and play baseball every day.”

Tebow arrived in Arizona on Sunday and had about a dozen fans waiting outside Scottsdale Stadium for him Monday night. After stretching and throwing with the Scorpions — a collection of players from various big league teams — he took some grounders and fly balls in the outfield, fluidly moving to cut off the balls hit at him.

In the batting cage, the left-handed Tebow needed a bit of time to warm up, hitting everything to the left side early in the session before pulling a few shots to the right side.

Next up: His first game, Tuesday in Glendale.

Scorpions manager Tom Goodwin wants Tebow to play as much as physically possible so he can find his rhythm in the field and at the plate. He will play for the Scorpions during the week and continue to work for the SEC Network on the weekends.

“He’s going to have to get ready for baseball activity,” said Goodwin, the Mets’ first base coach.

The Associated Press is a wire service to which WUFT News subscribes.
Previous Hurricane Matthew’s Damage To Haiti Felt In Gainesville
Next Oct. 11, 2016: Afternoon News in 90

Despite three football teams having to quarantine due to a positive COVID-19 test, officials from Alachua County Public Schools remain optimistic about the protocols they have in place.