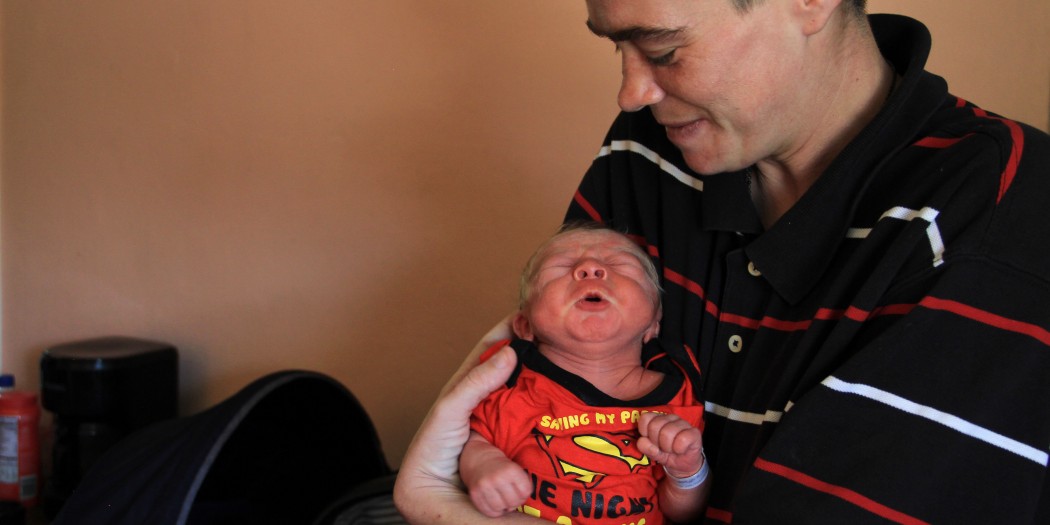 Racheal Morrison, 31, holds her newborn son, Greson. Morrison quit taking drugs after she found out she was pregnant with Greson. (Li Stalder/WUFT News)

Gainesville Police Officer Casandra Ballenger did not have a normal shift on July 5.

As the officer assigned to Dignity Village, the homeless camp adjacent to GRACE Marketplace, she usually patrols the area, responds to calls and talks to residents—but that day was different.

Ballenger was in court working a probation hearing that morning, after which she received a call from Racheal Morrison, a Dignity Village resident she’s known for a couple of years.

Morrison, 31, was at UF Health Shands Hospital after giving birth to her son, Greson, the day before.

Ballenger said Morrison had called her to let her know she had given birth, but also had something she needed to talk to her about.

“(I) walked into the room and saw someone that I knew she didn’t want in the hospital room,” Ballenger said.

Morrison’s ex-boyfriend, Adam Nick, was in the room with her. Nick is a registered sex offender and she didn’t want him there, so she called Ballenger.

“I was concerned (about) also all babies, not just mine,” Morrison said.

After Ballenger contacted the University of Florida Police Department, which has jurisdiction at the hospital, and alerted the head nurse. Nick was told to leave and issued a trespass warning.

But Morrison also faced another problem: She needed to find a new place to live for her and her baby. Dignity Village and GRACE Marketplace do not allow children.

Ballenger said her former partner, Officer Alicia Davis, who also knew Morrison, helped by reaching out to several church leaders, who offered to donate clothing and toys. City Commissioner Craig Carter, an elder at his church, offered to pay her rent deposit.

“The community and especially some churches have been awesome and amazing about their response and very, very helpful for this person in need, so it’s been great to see that all come together,” Ballenger said.

A pastor from Greenhouse Church in Gainesville  coordinated temporary housing for her in Starke with people Morrison considers family.

Ballenger said her biggest concern is that Morrison needs stable, permanent housing — away from the toxic environment of Dignity Village.

“I wouldn’t be putting this much effort into helping her if I didn’t truly think that she could do this,” Ballenger said. “She deserves the chance to be able to make this work.”

Morrison also knows she has come a long way.

She said she was a “crack head” and, at one point, would buy $150 worth of crack every day. She was a habitual marijuana smoker. Once she found out she was pregnant, she stopped — completely.

“It’s not that easy to, all of a sudden, just drop it. You will go through a lot of detox. Detox is when you sweat, you throw up, you feel like crap, you’re clammy. I went through all of it,” Morrison said.

But she said it feels great to be clean. Her son helped her realize that.

“If he wasn’t here, I’d probably go right back to it. But with him in my life, I will never touch a single drug because I don’t want him to follow my footsteps or his father’s footsteps,” she said.

After she finds permanent housing, Morrison wants to start working at GRACE Marketplace, St. Francis or  someplace where she can help the homeless. She also wants to take classes toward her GED.

She said, “The first thing that came to my mind (was), ‘How are you going to tell your kid to get an education when you don’t have an education?’”

Frankie Withey, a 45-year-old Dignity Village resident, said he befriended Morrison about a year and a half ago at GRACE Marketplace. He met her while picking up trash and she offered to help.

Since then, she has been someone he can confide in, aside from his fiancee. He said he’s seen her grow as a person and hopes her baby will settle her down a bit.

“She’s been through a lot of bad shit in life. And she’s trying to overcome all that, all the history, just as everyone out here is,” Withey said. “She’s one of the few that actually got outta here.”