Florida Fun Bikes rolled out its pedal-powered pub-crawler on Thursday with tours through downtown Gainesville. 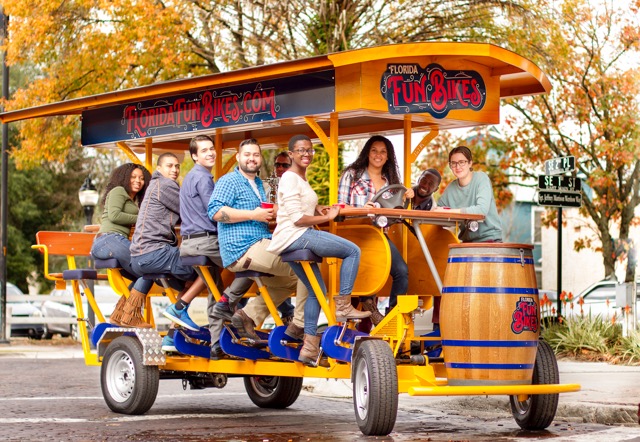 Amber Shelton, managing partner of Florida Fun Bikes, said the goal of the grand opening was to get people on the bike so they can see what it’s like.

“We really want the Gainesville community to feel like this is their attraction and that this is their way to see their city,” Shelton said.

“It’s something new, and Gainesville loves – needs – things new to do, because after a while it’s the same thing over and over again,” Robinson said.

Gainesville City Commissioner Helen Warren said she sees Gainesville as a good fit for Florida Fun Bikes and their competitor, The Spins.

“I’ve already heard that [Florida Fun Bikes] had a great weekend last weekend with doing several tours, and there’s people here today asking how to do it,” Warren said.

A week prior to the opening, the City Commission voted to change an ordinance in order to make the operation of the pedibus legal. Before the change, non-motorized vehicles for hire could only seat up to four passengers. The limit has been removed, allowing for the company to operate its 16-seater vehicle.

Shelton and Robinson brought the idea of changing the ordinance to the City Commission in late 2015. The pair said they plan to push for another update to the ordinance to allow them to have alcohol onboard the pedibus.

The co-owners of another pedibus business called The Spins, David Godec and Erica Husak, are planning to begin tours when their hand-craft vehicle arrives in April from Oregon.

Godec said the business will begin taking pre-orders soon. He said the website is finished and the booking software is live.

“Our cyclebus specifically has running boards, so even elderly people will easily be able to get on and off of ours,” Godec said. “We want to see kids, we want to see the elderly, we want to see young people, professionals, everybody, on board.”

The tours will run primarily downtown because the current ordinances don’t allow the pedibuses to operate on University Avenue or Southwest 13th Street. He said he plans to work towards getting these ordinances changed so the tours can be useful on University of Florida football game days.

“With UF football, I mean, the cycle pub will go hand-in-hand with all of the tailgating and all of the fun that goes down.”

Elise is a reporter who can be contacted by calling 352-392-6397 or emailing news@wuft.org.
@twitter.com/eliseengle
Previous Feb. 12, 2016: Afternoon News In 90
Next Gainesville Dating Game Makes Debut at Jolie Banquet Catering Venue

The Lede ✓|| Season IV Episode I: Falling for Unique Fashion

“Murder for Two” is playing at The Hippodrome as part of its mainstage season until Oct. 3.