On Monday night a grand jury decided not to indict Officer Darren Wilson. Over the next 24 hours, protests erupted in cities all across the country. Gainesville was among them. 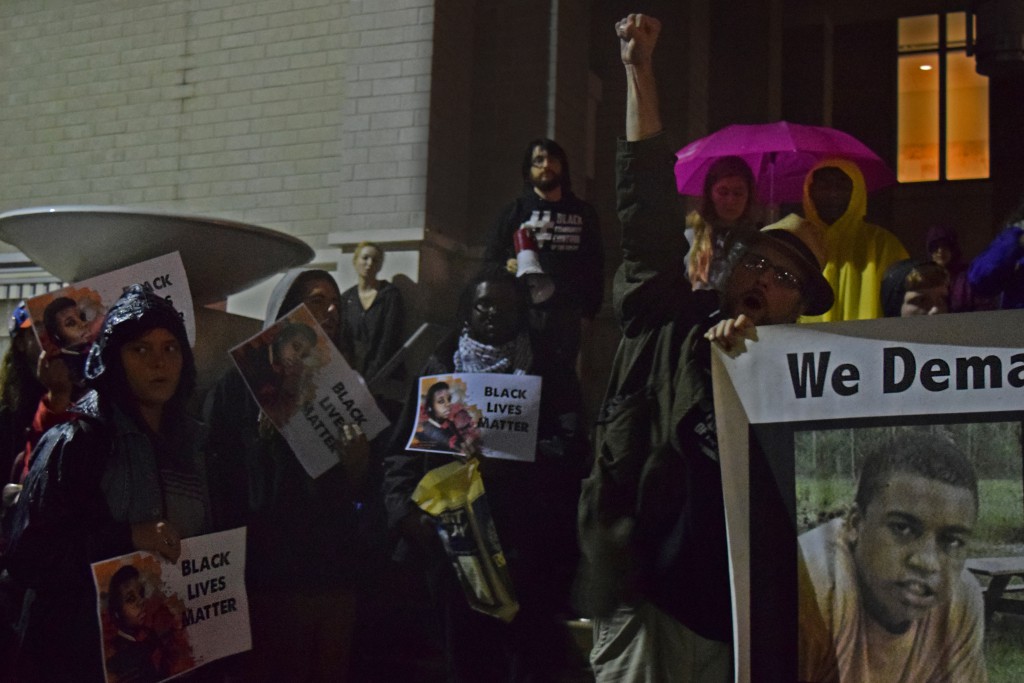 James Simpson pumps his fist into the air Tuesday at a protest at the Alachua County Court House. As a member of the Uhuru Solidarity Movement, an initiative that works to liberate all oppressed people, Simpson took part in the protest following a Missouri grand jury's decision to not indict Ferguson police officer Darren Wilson for the death of Michael Brown. 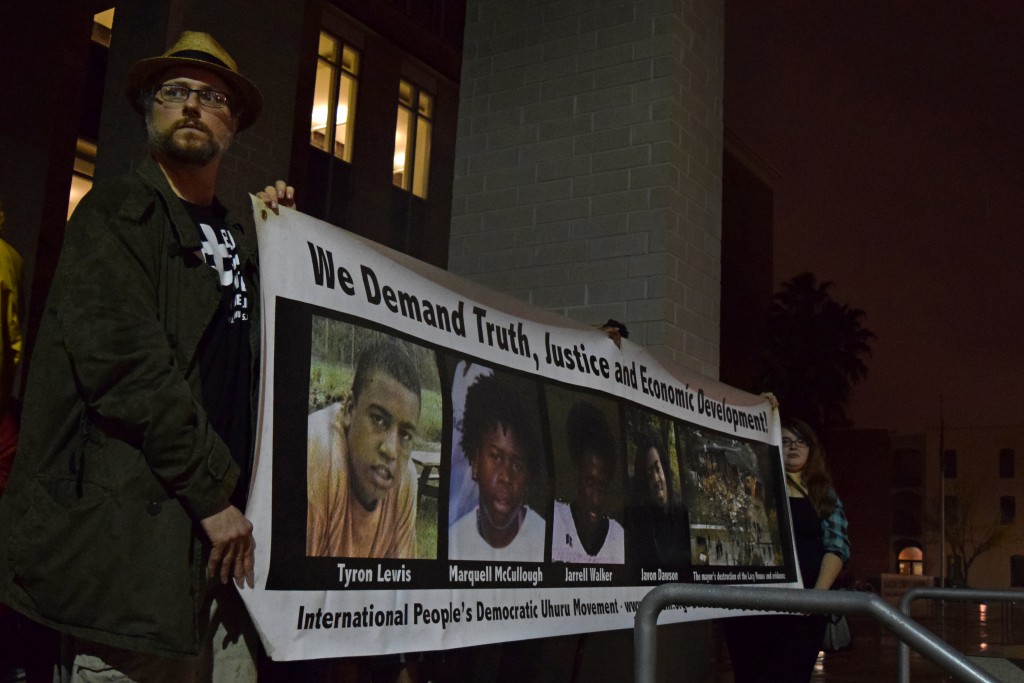 Two protestors hold up a banner at the Alachua County Court House. The banner portrays four young men who are believed to have died unjustifiably due to military-style raids by the police.

Eric Brown, a senior studying political science at the University of Florida, gives a speech to show solidarity with the people of Ferguson, Missouri.

Protestors hold signs outside of the County Court House on Tuesday to express their views on police brutality in the United States.

Annette Gilley, a representative for Occupy Gainesville, shares her thoughts about what transpired in Ferguson, Missouri. “We don’t live in a free country because not all of us are free,” Gilley said.

Azaari Mason, a junior studying political science at the University of Florida, begins his speech by singing a line with the crowd: “We who believe in freedom cannot rest until it’s won.” Mason represented the Dream Defenders, a human rights organization that challenges the “systems and forces of oppression that have crippled black, brown, poor, and all other minority communities.”

Azaari Mason speaks to the crowd gathered in downtown Gainesville.

Protestors gathered in the rain Tuesday night to demonstrate their support for Michael Brown.

Protestors gather outside the Alachua County Courthouse to show their disapproval of the current law enforcement system. 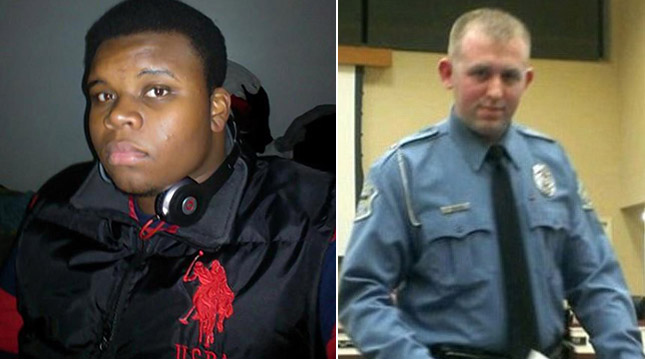 “I think it’s an opportunity people have seized upon to peacefully bring attention to a national epidemic,” said Art Forgey, Public Information Officer of the Alachua County Sheriff’s Office.

Chimurenga Waller, President of the International People’s Democratic Uhuru Movement, said his organization has been calling for demonstrations all across the United States. Earlier in the day, he was part of a demonstration in St. Petersburg. InPDUM’s platform demands “community control of the police.” They want to see the black community controlling the hiring, firing and disciplining of the people who work in their community.

On Aug. 9, Michael Brown, an 18-year-old black man, was shot and killed in Ferguson, Mo. by a white police officer. Officer Wilson saw Brown and a friend walking down the street after hearing reports of a convenience store robbery by individuals with a similar appearance. The details following are inconsistent. Some witnesses say Brown had his hands up and was surrendering; others say Brown was charging Wilson. Wilson fired his gun and shot Brown six times, fatally.

The following weeks saw protest after protest; some peaceful, many violent.

“There is a resounding sense of angst with everyone around the nation,” said Brittany King, a member of the Dream Defenders. “Everyone is waking up.”

Local police forces responded in Ferguson with tear gas and rubber bullets. Three months later, a grand jury made up of three black and nine white jurors decided not to charge Wilson with a crime after examining over 5,000 pages of evidence.

Protestors were prepared for this announcement. The International People’s Democratic Uhuru Movement and the Black is Back coalition announced that they would hold a protest at the Alachua County Courthouse if Wilson was not indicted. They did.

Azaari Mason, another member of the Dream Defenders, said he was at a watch party at the Civic Media Center when the decision was announced.

“I was heartbroken.” he said. “We are still trying to fight in 2014 to have an America that is reflective of life, liberty and the pursuit of happiness for all people.”

Ben Tobis, spokesperson for the Gainesville Police Department, said that his department works hard to ensure they have the best possible relationship with the community. However he acknowledged, “we know we will never have 100% success and we understand that.”

Protestors sang and chanted outside of the courthouse in downtown Gainesville. They held signs that read “With Justice Comes Peace,” “Black Lives Matter” and “Jail the Killer Cops.”

Dianne Tornay, the lead organizer of the event, said she was happy with the turnout, especially considering the weather. Rain fell on protestors throughout the hour long-event, but the group only seemed to grow larger.

There was no visible police presence at the event and the protest remained peaceful.

A federal investigation into the incident is ongoing.

What You Need To Do To Get Your Government Stimulus Check

Congressional leaders announced an agreement to fund cash payments to Americans, bailouts for key industries and aid to the health care industry.