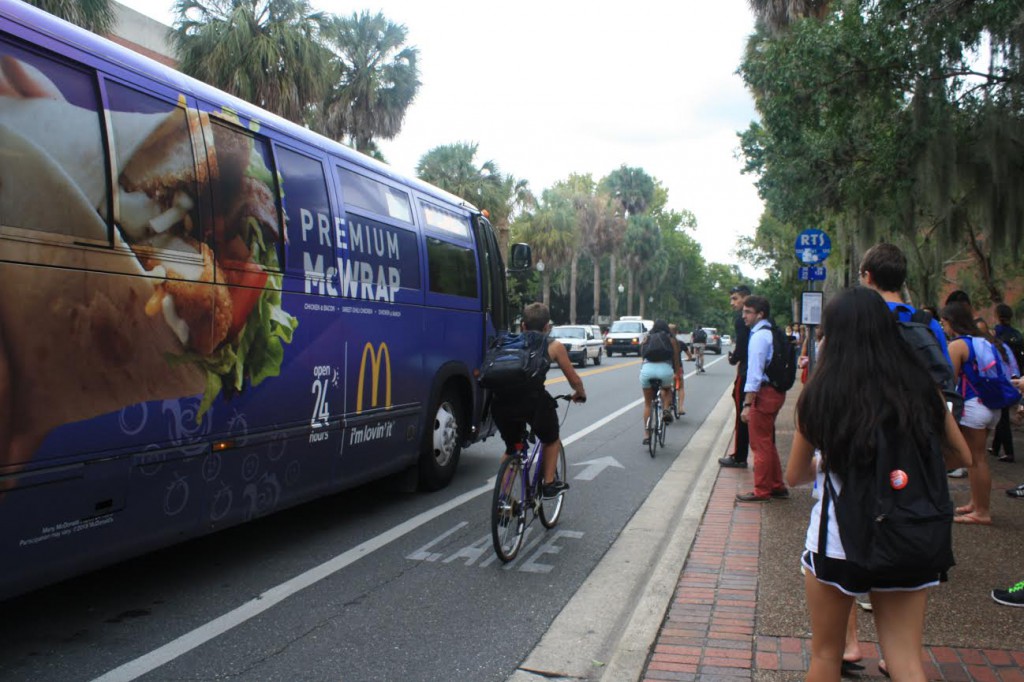 Alachua County officials have proposed an initiative to improve transportation in the region by adding a 1 percent sales surtax.

Moving Alachua County Forward, which will appear on the Nov. 4 ballot, will fund transportation projects for the county and its nine municipalities through a one-cent increase in sales taxes that will span over eight years.

City and county commissioners have agreed existing revenues are not sufficient to take care of the transportation needs in Alachua County, said Mark Sexton, the communications coordinator for Alachua County who is also heading this initiative.

The revenue will be used to address eroding roads and the lack of bicycle and pedestrian lanes. In addition, more bus routes will be created, making them more accessible for people with disabilities.

“The goal of this initiative is to have an overall better transportation system in place,” Sexton said.

If the initiative passes, the projects would either begin immediately or once funding has become available during that eight-year period with the extra surcharge.

Compared with other counties in Florida, with sales taxes ranging from 6.5 to 7 percent, the county is at the base level of 6 percent, so adding this tax would put Alachua County at the average, said Jeff Hays, a manager at Alachua County Growth Management.

Because this is a sales tax and not a property tax, Alachua County residents won’t be the only ones paying. Anybody traveling in the county including area college students will also pay the tax, said Chip Skinner, the marketing and communications supervisor for Regional Transit System in Gainesville.

“They’re having to pay that tax when they are living here before they go back home,” said Skinner.

Sexton said 30 percent of the revenue would be collected from visitors if this referendum passes, so taxing both visitors and residents is important.

With the amount of new projects, Hays said the county is making plans to keep any traffic to a minimal level.

“We’re pretty careful about making sure whatever we’re going to be doing, resurfacing projects, that we’re coordinating and doing them so that there’s the least disruption as possible,” he said.

An example is the resurfacing work being done on 16th Avenue and 23rd Avenue, said Hays. The city wants to complete that project before doing work on Eighth Avenue so there won’t be as much disruption. A plan to create more connecting roads throughout the city to reduce traffic congestion is also in the works.

“The city of Gainesville and the other eight municipalities within Alachua County all agree that something needs to be done,” said Skinner. “And they feel that this is the best way to do it.”

Ana is a reporter for WUFT News and can be contacted by calling 352-392-6397 or emailing news@wuft.org.
Previous University of Florida Alumni Shed Light on Electronic Waste
Next Levy County Shooting 911 Call Released