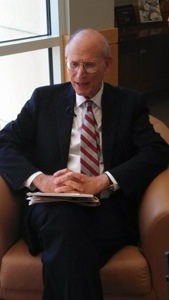 Only a few hours remain until a possible federal government shutdown at midnight Oct. 1, marking the beginning of the government’s fiscal year.

The bipartisan discrepancy over the Affordable Care Act is contributing to stall a continuing resolution on government spending passing through Congress.

Stuart Eizenstat, former U.S. ambassador to the European Union, said bipartisan financial tension is nothing new. Eizenstat, who will be speaking Monday at the Bob Graham Center for Public Service at 6 p.m., said the debate shouldn’t be over whether the government will shut down, but instead what will be done to bring it back.

Congress has two options for resolving this financial debate, he said, but with mere hours left, he believes the Senate will accept neither.

The reaction of the public and financial markets after midnight tonight will likely contribute to how long the shutdown lasts, Eizenstat said.

The last time the government closed was in late 1995. It lasted 21 days.

Joy is a reporter who can be contacted by calling 352-392-6397 or emailing news@wuft.org.
Previous How Florida Lawmakers Might Strengthen Sexual Predator Laws
Next Honda’s Project Drive-In Saves an Ocala American Tradition

Just before 11:30am, NASA Launch Director Charlie Blackwell-Thompson called off Saturday’s attempt to get the …