Florida residents embarked on gator hunts in record numbers in 2011

If you ask Alachua County gator hunter Johnny Bass how he got that scar on his forehead, you won’t get a straight answer.  But he will tell you it involves gator hunting on Newnans Lake.

Florida’s 15-week gator hunting season lasts from Aug. 15 to Nov. 1. And for each of the last 15 years, you’re sure to find Bass hunting gators on Newnans Lake. Of course, Bass’s history with the lake is rooted deep in his childhood.

“I learned to fish and waterski in this gator-infested lake. I’ve waded the whole perimeter of this lake bass fishing,” said Bass, a 63-year-old Gainesville resident retired from fixing UPS trucks.

Bass calls himself the “Old Man of the Boat,” and he is joined by some younger gator hunters from Gainesville — C.J. Masciale, John Kurtz and Kurtz’ 18-year-old son David, who’s been helping the group hunt gators since he was young. Masciale runs C.J.’s Concrete and Kurtz operates Hog Town Auto in Gainesville.

Fishing and hunting, especially catching gators, has been their true passion for the last 10 years—an exciting passion that sometimes takes shape overnight, since the law in Alachua County is to hunt from 6 p.m. to 10 a.m.

“We pulled an all-nighter gator hunt,” Kurtz said. “I saw a red eye in the bushes, and I couldn’t hook him. Johnny set a big hook and threw it and hooked the gator.  Johnny almost fell into the water.  It was an 11-foot, 11-inch gator.

“The tail slapped the boat 10 times. Dad had me around the waste thinking it was going to pull me over,” he said.

Last year, more than 8,100 gators were caught in Florida, the highest number in the past 10 years, according to the Florida Fish and Wildlife Conservation Commission.

Bass says all their experience and camaraderie are what make their hunts so successful. They have caught five gators this year. The biggest was nine feet, seven inches.

That’s nothing in comparison to the 13-foot gator they caught two years ago —  a gator so old, Bass says, he only had two teeth left.

As the gator hunting season ends, Bass and his crew are zipping around Newnans Lake looking to hook one more big gator. Between the four of them, they have three permits, meaning they are allowed to catch a total of six gators in Florida this year.

No matter the size of the catch, Bass and company say they’ve only felt excited — never scared or endangered — as they hunt gators.

“The hunt is as dangerous as the people you’re hunting with,” said Bass, who still won’t say how he got that scar on his forehead. “What happens on the boat stays on the boat.”

Bass points to the gator he has spotted. John Kurtz looks through binoculars to decide if the alligator is large enough to go after. 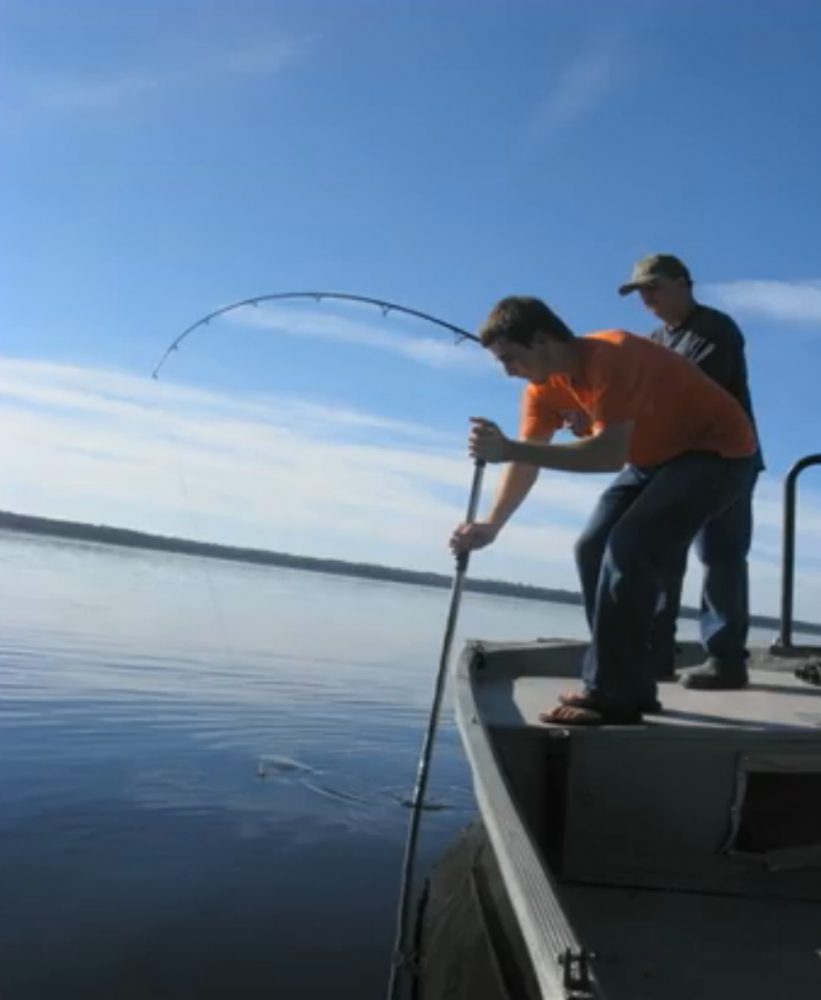 Father and son John (back) and David (front) Kurtz work to bring in an alligator that is hooked. David Kurtz is using a gaff hook. 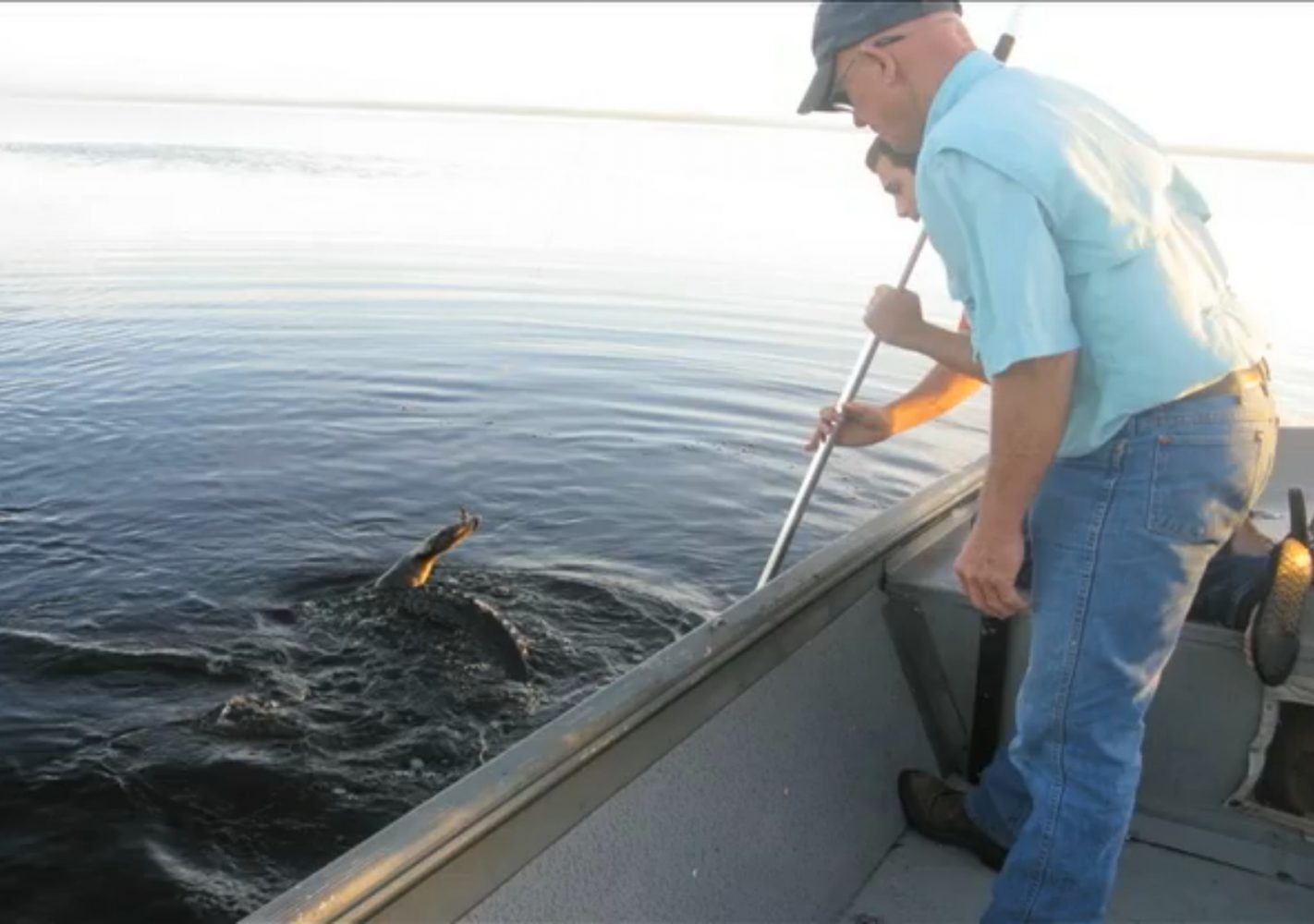 Hunters Johnny Bass and David Kurtz are holding onto the gator while it tries to get away. They are tiring the gator, so it will be easier to control. 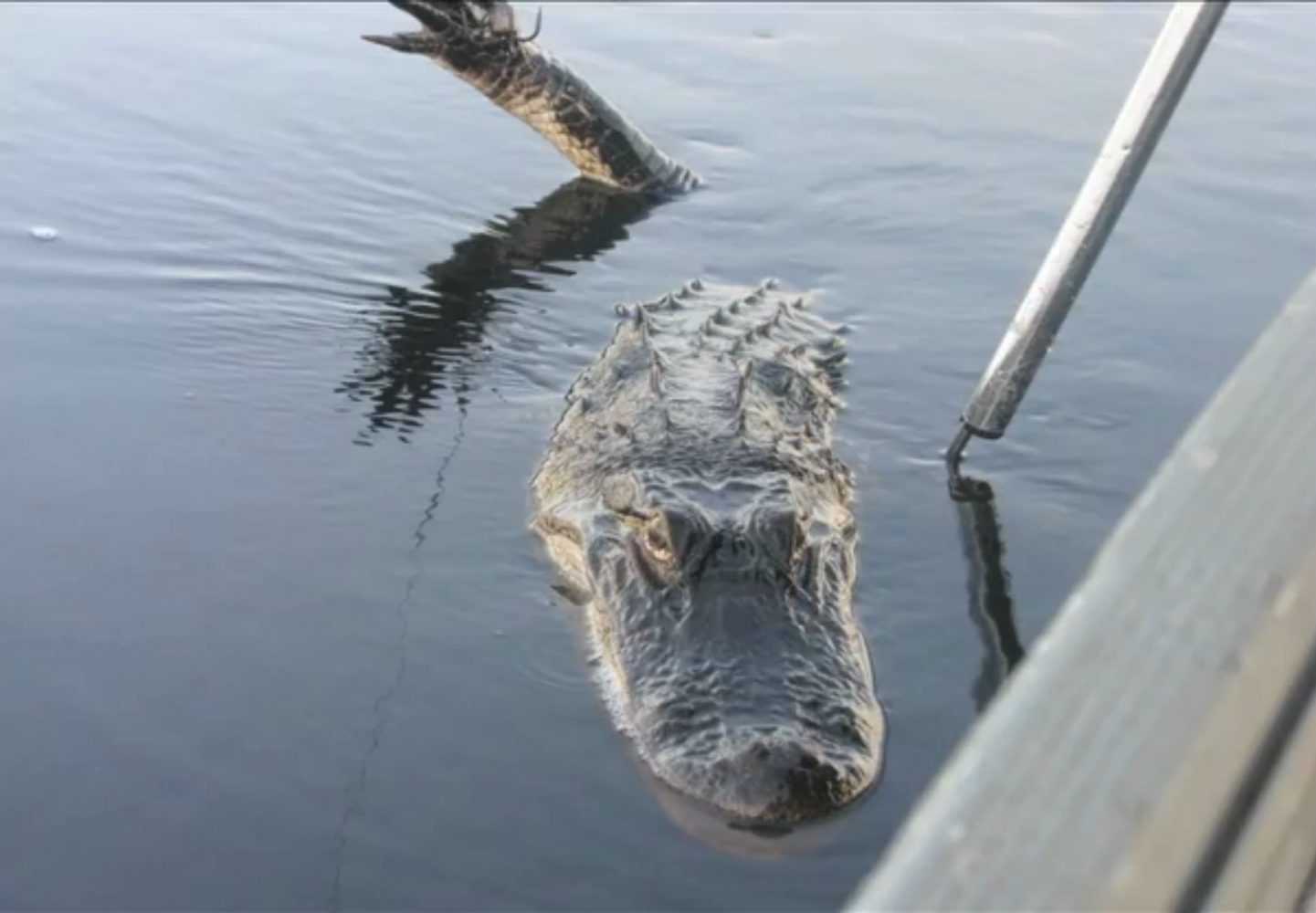 This is the face of the alligator that has been caught. To get the gator to remain still, the hunters exhausted it. 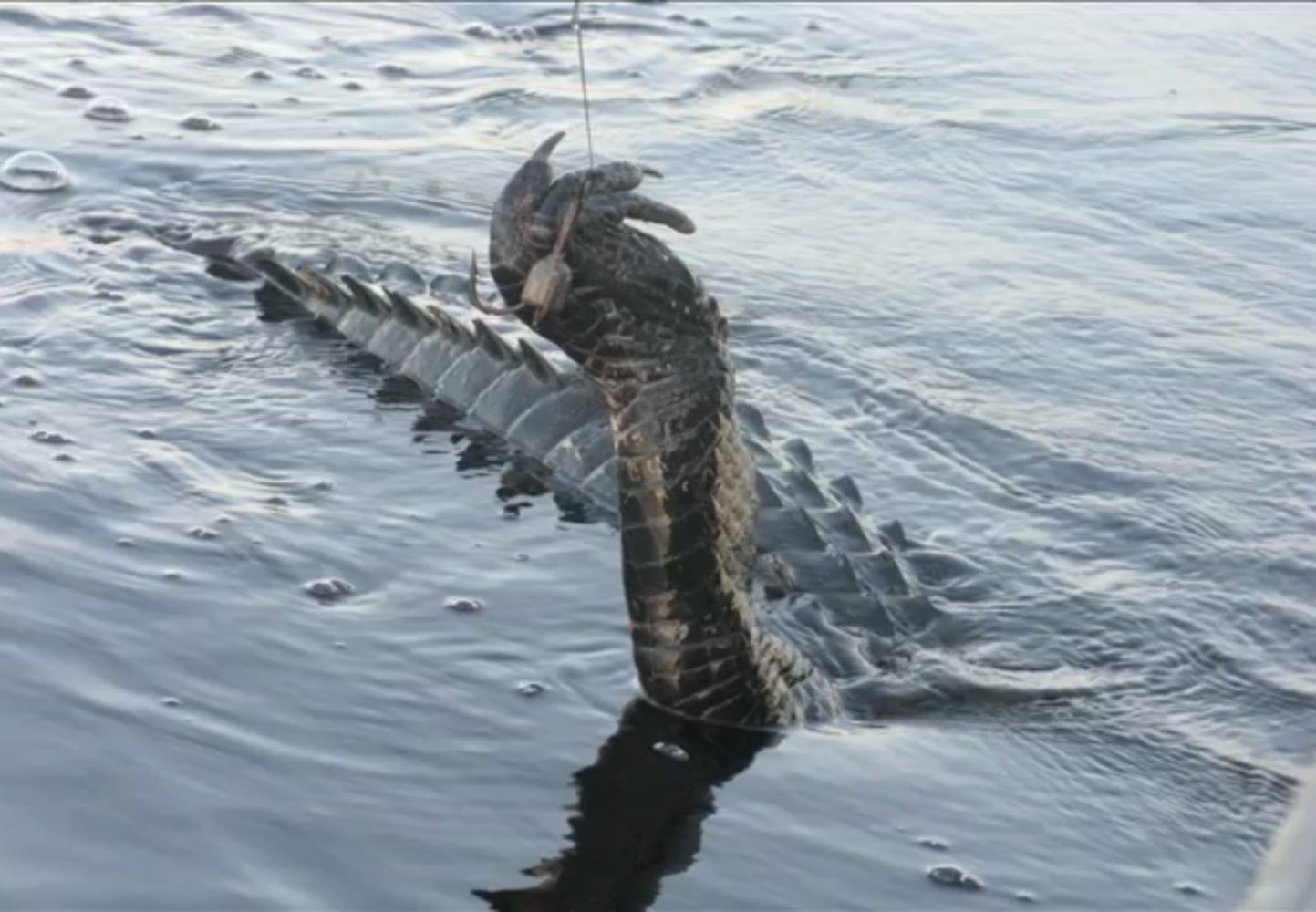 The gator has been caught, and the hook is in its leg. 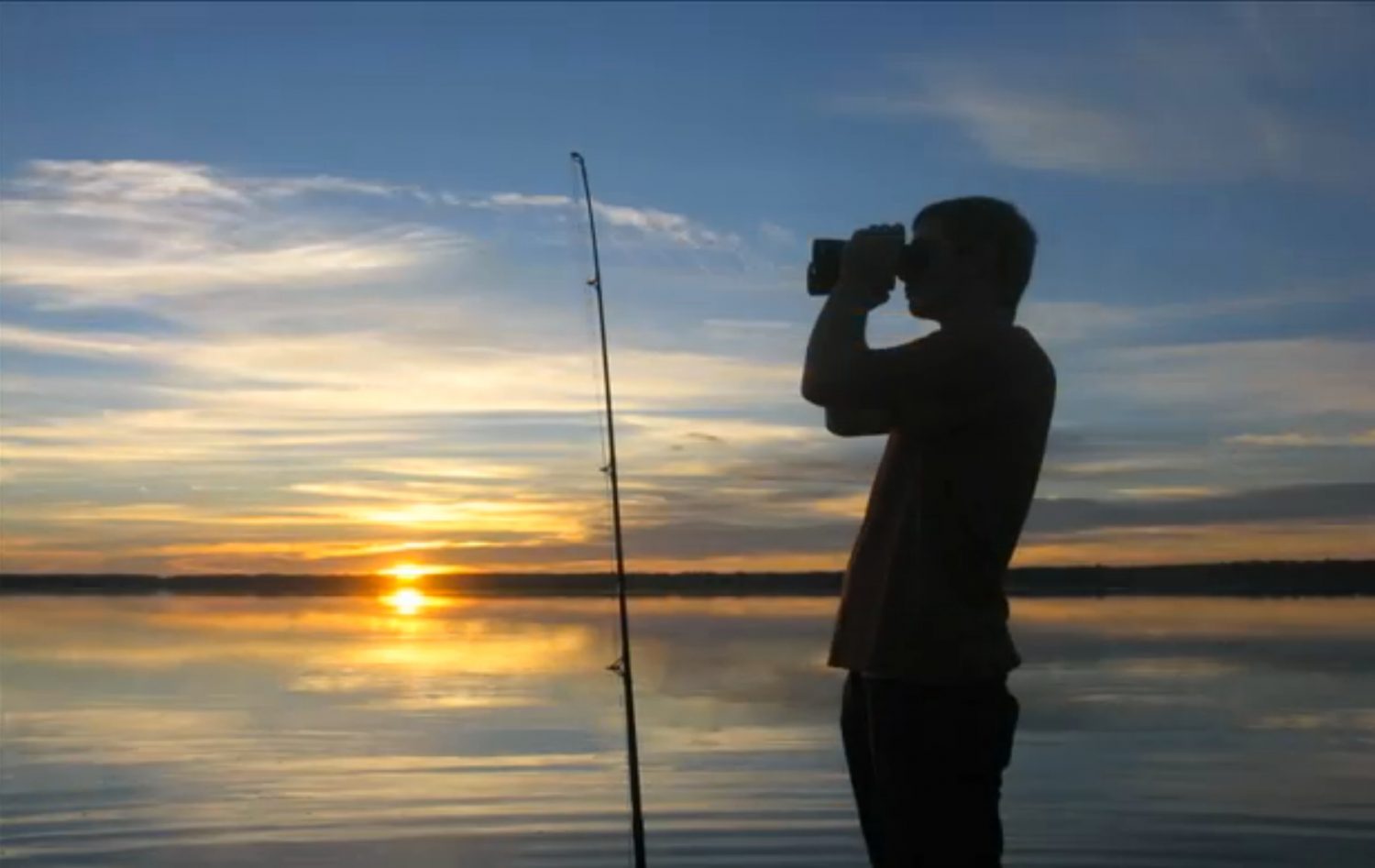 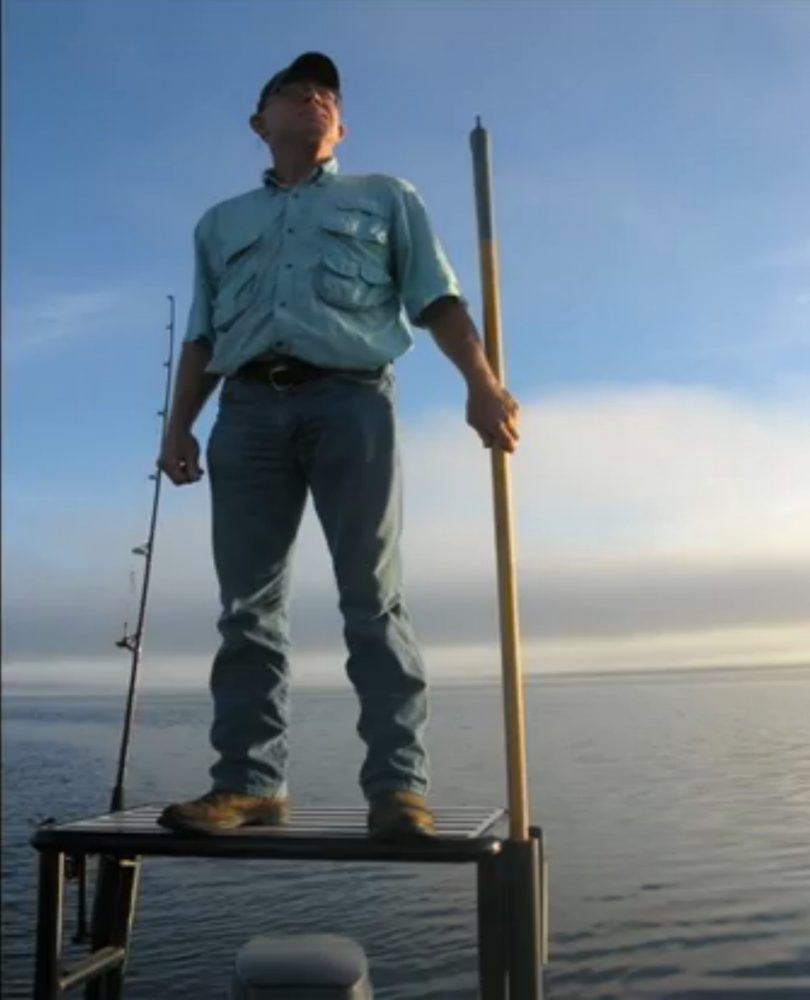 Johnny Bass stands on the back of a 20-foot-aluminum boat looking for gators. He has more than 15 years of experience hunting them.

Belinda is a reporter for WUFT News and can be contacted by calling 352-392-6397 or emailing news@wuft.org.
Previous Medicare open enrollment period begins
Next University of Florida students react to second 2012 presidential debate