Places where queer people can hang out with others like themselves have always been an integral part of the culture of the LGBT community.

But finding relevant and accurate information on where to find these spaces and businesses or how to support them was difficult, until the Pride App.

The Pride App was created as a way for individuals to find businesses that are either gay operated or owned or gay-friendly. Jonathon Pritchard, of Wildwood, is the creator of the Pride App, and he said he created the app to support LGBT and ally-backed businesses of all sizes. The app provides a platform where smaller businesses can be seen.

“You go online and look up gay-friendly hotels only for the Hilton to show up,” Pritchard said. “That is not what I want for the app.”

Born in Ohio, Pritchard spent most of his adult life living between Florida and California. In 2017, he got a job offer near, Florida.

Before moving, he researched to see if there were any gay bars in the area. He found some information online that said there were three open gay bars.

But it wasn’t until he had moved to Melbourne that he found out none of them were still operating.

Pritchard had the idea for the app when he was visiting a city for work, and despite countless Google searches and research, he could not find any queer-operated or LGBT-friendly businesses. This spurred a search for LGBT-operated businesses nationally.

After compiling a list of 5,000 LGBT-run businesses, Pritchard called every single one of them. Pritchard was disheartened to find that out of the 5,000 businesses only 800 were still open. Dissatisfied with his search results, Pritchard said he committed himself to creating a place where individuals could find queer businesses and spaces for free.

“I want it to always be free to users,” Pritchard said. “Even if it is only 99 cents, I feel like that is something I just wouldn’t want people to have to pay for this information.”

The Pride App launched for both Android and Apple users in 2021. It lists more than 4,300 businesses across the nation and more than 100 internationally.

Business owners can list themselves on the app for a standard profile free of charge. The business premium package goes for $60 a month and includes premium placement, the ability to list events and promotions and receive app support.

To ensure the app’s success, the development of the app has been self-funded by Pritchard, who is currently employed as an Uber driver. The app recently had a booth at Ocala Pride where Pritchard was able to get more local businesses, including 10/10 Ranch, to join.

The 10/10 Ranch opened its stable doors in June 2022 and is a gay-operated business that breeds, boards and trains horses. Alicia Kitay, one of the managers at the ranch, said she was excited by the idea of the app, as it is a way for people to network and help promote their business.

“It’s a great way to give back and help the community grow by being able to hire someone from the community,” Kitay said.

The app lists a wide variety of businesses throughout Florida. Bodystreet is a gym located in Winter Park. The gym opened two years ago during the pandemic and specializes in EMS training or electrical muscle stimulation. This entails the user putting on a device that uses tiny electrodes to accelerate workout duration and enhance results.

This specific type of training is done via one-on-one sessions with a trainer for 20 minutes once per week. This allows individuals privacy that they would not be able to receive at a conventional gym.

Steffen Brandt, one of the co-owners of the gym, talks about his relationship with the Pride App.

“We initially heard about the Pride App from a presentation given by Mr. Pritchard,” Brandt said. “While this gym isn’t specifically made for members of the LGBT community, the privacy is something that appeals to the community and allows them to feel more comfortable when wanting to embark on their own fitness journey.”

In addition to supporting businesses, Pritchard emphasizes the importance that these queer spaces have for the community. Whether it be gay-operated or gay-friendly businesses, these environments offer LGBT people respite from a society that judges them.

“There will always be a need for our own space because at the end of the day there are still many parts of the country that aren’t accepting of us,” Pritchard said.

Peach Storey, 22, has been a Gainesville resident for the past four years and has recently started using the Pride App.

“I really like the idea behind it, but there are definitely more businesses that are LGBT-friendly than there are on the app right now,” Storey said. Storey also said that there are lots of businesses that would meet these requirements such as How Bazar or the Auk Market.

It is important to populate the app with these types of businesses so queer people know where they are accepted and are free to be their authentic selves.

Amelia James, 25, is a trans woman and a former employee at Starbucks. When she used to work there, she said it would always make her uncomfortable when she needed to correct someone when they used the incorrect pronouns to address her. Now when she sees employees at businesses wearing pins that support the LGBT community, she said she feels more comfortable and understood.

“I love seeing people like me in places of business because I feel more normal,” James said. “Small signs of allyship with things such as pronoun pins can make a big difference in how comfortable I feel being myself in public.”

Finding LGBT-friendly businesses is especially important for transgender individuals who are more than four times more likely to experience violence than cisgender people, according to a study conducted by the UCLA School of Law. Businesses such as clothing stores, tattoo shops and even private healthcare offices can be quite intimidating for trans people because of the risk of discrimination.

“Having a place where we can find a hotel or a restaurant where we won’t be questioned or judged will always be important to the community,” Pritchard said.

Nicholas is a reporter for WUFT News who can be reached by calling 352-392-6397 or emailing news@wuft.org.
Previous Gainesville becomes first city in Florida to apply ‘fair chance hiring’ to private employers
Next The Point, Dec. 16, 2022: Gainesville commissioners pass new ordinance changing steps for criminal background checks 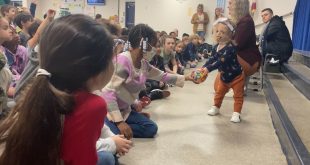