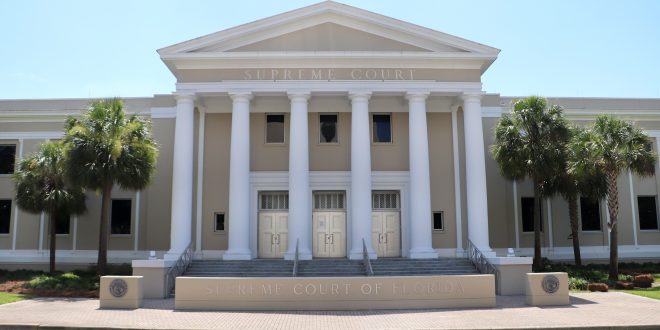 The Florida Supreme Court will consider arguments this week in a case that considers whether the identities of officers who kill civilians should be protected under the state’s new Marsy’s Law. (Lauren Witte/Fresh Take Florida)

The Florida Supreme Court will consider arguments Wednesday in Tallahassee in a case that considers whether the identities of police officers who kill civilians in violent encounters can be withheld from the public.

Law enforcement is among one of the only civilian professions in which the use of deadly force is authorized. The court is considering whether a Florida constitutional provision deems officers who use deadly force to be victims of imminent threats of harm and therefore protected under Marsy’s Law, preventing their identities from being made public.

The Marsy’s Law initiative began in California and was intended to ensure crime victims have equal rights on the same level as the accused and convicted. It is named for Marsalee Nicholas, who was stalked and killed by her ex-boyfriend. A week after her death, her family was confronted by the accused killer, unaware he was released on bail.

Voters passed the law as a constitutional amendment in 2018. It protects “the disclosure of information or records that could be used to locate or harass the victim or the victim’s family, or which could disclose confidential or privileged information of the victim.” Different states that have passed similar laws have subtle differences.

In the first encounter in May 2020 – which occurred five days before George Floyd was murdered by a police officer – a Tallahassee officer was charged by a man with a large, hunting-style knife who yelled, “Ima kill ya.” The officer fired while the man was about 10 to 15 feet away, and the man died from the gunshot wounds, according to court records.

Just two days after Floyd’s death, the second Tallahassee officer was dispatched to search for a stabbing suspect. The officer was confronted by a suspect armed with a handgun, and he fired at the suspect, who later died.

Tallahassee officials said they intended to disclose the officers’ identities publicly. But the officers and their bargaining representative, the Florida Police Benevolent Association, sued the city, arguing the officers were victims of imminent threats of harm whose identities should be protected under the law. Officers have similarly been claiming privacy rights under the law in the Dakotas already.

Marsy’s Law for Florida, a political committee that advocated for passage of the law, has not made clear its stance on the case. Jennifer Fennell, the organization’s spokesperson, said it is “an important constitutional issue with statewide significance” and said uniformity to Marsy’s Law benefits everyone.

A coalition of news organizations, including the First Amendment Foundation, Florida Press Association, Gannett, Miami Herald and New York Times, said the Tallahassee Police Department did not fulfill their public records requests to identify the officers. The city and the coalition argue this violates Florida public records law in the state constitution.

A trial court ruled that a law enforcement officer acting in an official capacity cannot be considered a victim under Marsy’s Law, but the 1st District Court of Appeals reversed the judgment, meaning that the city would not have to reveal the identities of the two officers.

The higher court’s ruling was a loss for the city and attorney Mark Caramanica, who represents the media coalition. He said that if the state Supreme Court were to uphold the decision, it would be an “incredible move in the wrong direction” for Florida’s transparency laws.

Caramanica questioned where Marsy’s Law protections would end if they are granted for officers: Any time deadly force is used, officers can reliably claim they faced an aggressor, feared for their life and were the victims of assault, which is a crime, he said.

The media’s job investigating officers involved in violent encounters – including checking to see whether officers have a history of similar incidents – would be nearly impossible, he said. “It really opens the door to abuse,” Caramanica said.

The appellate court said protecting officers under Marsy’s Law does not absolve accountability for their actions. It said maintaining confidential information does not halt internal affairs investigations or impede grand jury proceedings. Additionally, a state attorney can review the facts and determine whether an officer in each situation falls under the law.

Attorney Luke Newman representing the Police Benevolent Association said the fatal shootings of the aggressors in the two Tallahassee cases were recorded on body cameras and released to the public with explanation. “The idea that there’s no accountability to the decision makers, I think, is an imaginary problem,” he said. “It doesn’t exist in my case.”

The Palm Beach County Sheriff’s Office argued in the case that police officers should be afforded the same rights as other citizens because they do not surrender their humanity when they put on a uniform: “The PBSO believes that while it may take superhuman courage to wear a badge, the heroes who do so are just as human as any other citizen of our great state.”

Not all sheriff’s offices stand behind the two Tallahassee officers. The sheriffs in Pinellas and Volusia counties questioned how officers can be victims of their own uses of force. Disclosing officers’ names rebuilds the eroding public trust in law enforcement, they said.

The City of Miami Civilian Investigative Panel, which oversees the Miami Police Department, weighed in, too: If asked to withhold the identity of officers under investigation, the panel said its entire function would be undermined.

Marsy’s Law was never intended to protect officers on duty, said Barbara Petersen, executive director of the Florida Center for Government Accountability, which filed an argument in the case. “How can they be the victim of a crime when they are the people we trust to respond to a crime?” she said. “They’re not victims because that’s their job.”

Before voters approved the amendment, skeptics of the law warned of unintended consequences from the poorly drafted legislation, said Nova Southeastern University College of Law Professor Robert Jarvis, an expert in Florida constitutional law. “If you had a time machine, go back and ask voters, they never would have thought of police as being victims of crime,” he said.

A state Supreme Court ruling in favor of the city and media coalition would be surprising, Jarvis added. The amendment does not define who is a victim of crime. Because the constitution does not say that police cannot be victims, the state Supreme Court’s literal interpretation would protect officers, he predicted.

Jarvis said the appeals court and the Supreme Court – both conservative courts in Tallahassee – typically rule in lockstep.

This story was produced by Fresh Take Florida, a news service of the University of Florida College of Journalism and Communications. The reporter can be reached at carissa.allen@freshtakeflorida.com. You can donate to support our students here.

Carissa is a reporter for WUFT News who can be reached by calling 352-392-6397 or emailing news@wuft.org.
Previous Charges against Jalen Kitna spotlight the problem of child pornography in Florida, nationally
Next Gainesville City Commissioners vote to nearly double their salaries

With the internet growing and expanding at a rapid pace, the exploitation of children on …