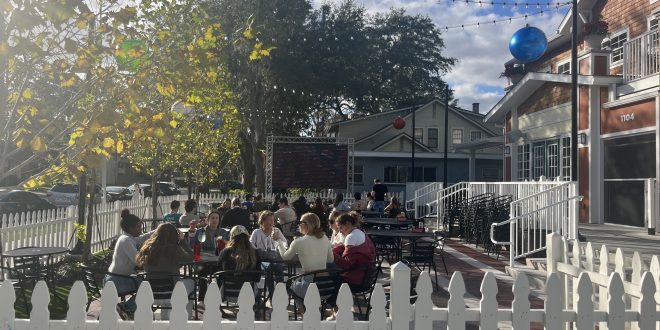 The Swamp is one of the many restaurants showing World Cup games both indoors and outdoors to accommodate as many guests as possible. They are able to make more of a profit as fans enjoy the cool weather. (Lindsay Schindler/WUFT News)

Casey Foran went to class from 10:40 to 12:35, then at 1:30, she headed over to The Swamp Restaurant to watch the United States take on Iran in the final game of the 2022 FIFA World Cup group stage. She cheered for the US alongside 500 fellow UF students for the full 90-minute game.

While it may be more difficult to fit into her schedule, Foran, a 21-year-old UF senior, prefers to be in Gainesville for soccer’s biggest event as opposed to watching from her hometown in Georgia.

“Finals season” takes on an entirely new meaning as students try to find time to study for their finals and tune in to watch the 2022 World Cup. Typically held in the summer, this year the World Cup runs from late November to mid-December to account for Qatar, the host country, and its hot climate.

Unlike when the World Cup is held in the summer, the bustling college town of Gainesville is now thriving students go to watch the games at local bars.

The Swamp Restaurant owner Ryan Prodesky estimates as many as 1,000 walked through the doors on Tuesday during the US vs. Iran game.

When the U.S. scored the one and only goal of the game, he could only describe the restaurant as “chaos.”

“The building literally shook,” he said. “I would say it’s one of the louder moments I’ve been a part of at Swamp.”

The summer crowd differs from the winter one in terms of availability. Less people are in Gainesville over the summer, but even fewer are in the city during the week of Thanksgiving. This makes it difficult to compare the numbers of both revenue and attendance.

“It’s like trying to compare apples to oranges,” Prodesky said.

Businesses find the time of the games to also have an impact on revenue and attendance.

Time zones pose an issue in terms of game times. Qatar is eight hours ahead of Gainesville, so some games kick off as early as 5 a.m. EST. Gainesville restaurants are only able to show games that kickoff at 10 a.m. or 2 p.m.

“It’ll be interesting to see what happens on Saturday with the 10 a.m. start time,” Prodesky said. “I think we’re still within that window of times that are acceptable.”

Some people don’t go to restaurants with the intent of watching the World Cup, but they stay longer once they see it’s on.

Satchel’s Pizza owner Satchel Raye has been playing the World Cup in his restaurant, and though he wouldn’t consider it a watch party, he has noticed some guests stay a bit longer and spend a bit more when they see the game is on.

“If you’re sitting in a space with nothing to look at, you’re gonna eat and leave,” Raye said. “But if there’s a game on, you might have another beer and watch a little bit.”

As the World Cup progresses past the group stage and into the knockout stage, games will grow longer as overtime goes into effect, as games can no longer end in a tie.

When the restaurant is as packed as it was on Tuesday, The Swamp Restaurant’s profit is increased by almost 300%, said Prodesky.

Foran estimates she spent around $40 watching the US vs. Iran match on Tuesday, and would consider that a typical amount for watching a game.

As the World Cup progresses but students begin to leave Gainesville for the holiday break, Prodesky is unsure as to how the restaurant will perform financially. A winter World Cup is new to everyone, but he still anticipates an impressive turnout.