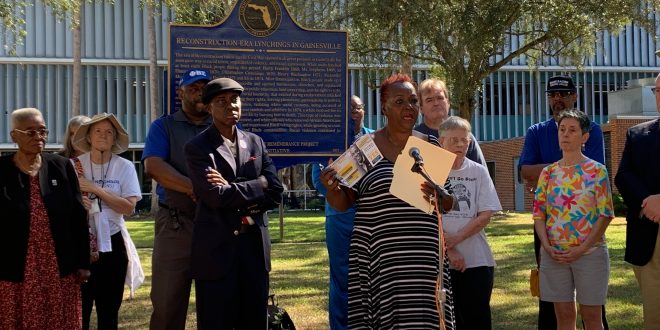 The National Association for the Advancement of Colored People’s chapter for Alachua County announced at a press conference Tuesday morning that it will pursue legal action against an advertising campaign that quoted political leaders of the local Black community to garner support for single-member districts, a referendum on November’s ballot.

Long said his quote was taken out of context from 1984 when the NAACP was trying to institute single-member districting in Gainesville to increase African American representation in the city commission.

Standing in front of the Reconstruction-Era Lynchings plaque outside the Alachua County administration building, Foxx likened the fliers to a modern day lynching and said the people who sent them out “are trying to do everything but tell the truth.”

Commissioner Ken Cornell, who also spoke at the conference, said he thinks two PACs are responsible for these mailers and signs: Social Justice PAC and Leading for Our Future, Inc.

But Republican strategist Stafford Jones could not confirm this. He said Leading for Our Future, of which he is the chair, probably produced these fliers but that he couldn’t be certain because it makes a lot of content.

Unlike the local NAACP, the national NAACP does not support at-large districting, Jones said. He pointed to a Q&A from the NAACP Legal Defense and Education Fund as well as a doctrine on the NAACP website referring to at-large districts as a well-established threat to the voting power of minority groups.

“They can file a lawsuit all day long if they want. But they can’t fundamentally sue us for educating the public [and] educating the voters on what their parent organization stands for,” Jones said.

WUFT could not reach the national NAACP for comment. Foxx said she also has not yet received official word from the parent organization but is working through legal protocol with the NAACP state conference president.

An Alachua County Supervisor of Elections spokesperson said its office is responsible for addressing misinformation concerning elections and voting but refrains from becoming involved with political campaign matters.

Implications of the advertisements

Chair for the Alachua County Democratic Party James Maggio said that last week in East Gainesville, his party discovered fliers and signs advocating for the single-member district provision on November’s ballot. That alone didn’t bother him.

“That’s fair game. We’re voting on it. It’s a political issue. Everybody gets to put their images up,” he said.

Maggio said he was bothered because they used Long and Commissioner Charles Chestnut, both longtime leaders in the local Black community, as well as the NAACP in a way that he thought misrepresented their current positions.

“I think it’s really misleading [and] borderline racist because of its just cynical appeal to Black voters,” Maggio said. “As if they couldn’t just make the argument, they had to say ‘your people’ are in favor of it when, of course, they are not.”

In response to Maggio’s criticisms, Jones said that the advertisements are for all voters of Alachua County, not just Black voters, and that the quotes are not misleading or taken out of context. He also said that they are meant to show a lack of consistency among local Democrats.

“We have demonstrated that the Democratic Party is being hypocritical,” Jones said. “Our intention was to demonstrate that the same people who worked so hard to seek single-member districts, even 30 years ago, are now opposed to it.”

Jones also criticized Maggio for saying the advertisements might confuse Black voters, because voters already know the current positions of Long, Chestnut and the local NAACP.

Maggio felt that the flier’s use of present-tense language, such as “Our Leaders Agree” and “Stand with Our Local Leaders,” makes it seem like those leaders support single-member districts in the present day.

Longtime NAACP member Vivian Filer, who spoke at the NAACP conference about discovering these advertisements at her residence in Lincoln Estates, said all voters don’t read what they should vote for and can misunderstand the political jargon surrounding various issues.

“So they look for ways to make decisions. And if a flier shows up and have people that they respect, as in Commissioner Chestnut and former commissioner Long, they trust that that’s a trusted leader,” Filer said.

The issue of single-member districts

Both Jones and Maggio said their position on single-member districts would result in a more representative and diverse Alachua County – but for different reasons. And they both question the true intentions of the other side.

Jones explained that downtown Gainesville’s concentrated population of blue voters, what he calls “The Berkeley of the South,” dictates the political will for the entire county.

“With at-large voting, what you have is a hegemony of one type of voter, those in downtown Gainesville, picking for everybody,” Jones said.

He also said single-member districts would likely increase representation in the county commission for Black voters.

“In East Gainesville, there is one African American on the Alachua County Commission, where statistically there probably should be two,” Jones said. “Which is exactly why the [national] NAACP says that single-member districts is preferred and at-large voting is discriminatory.”

As it relates to Black representation, Maggio said Jones might be right “if they drew them in a way that isolated the east side of town into its own districts.”

However, Maggio said he doesn’t trust that Republicans would draw those districts in a way that benefitted Black people. Instead, he thinks that they would take advantage of the area surrounding Haile Plantation, what he considers to be a predominantly white and Republican area, to guarantee at least one Republican on the county commission.

“I’m incredulous to the fact that anything proposed anywhere, up and down the localist to the most national level, by the Republican Party has ever truly advantaged Black people,” Maggio said. “And I think you can see that by the fact that every single Black leader is going the other way.”

Jones said local Democrats are only concerned with making the Alachua County Commission more progressive, even if that means less Black representation.

Voters will soon see the results of these political efforts. Early voting began on Oct. 24, and the general election is on Nov. 8.

Zachary is a reporter for WUFT News who can be reached by calling 352-392-6397 or emailing news@wuft.org.
Previous Hurricane Hunters: How they protect Florida and others around the world
Next Queer Maker’s Market connects LGBTQ+ community for Gainesville pride month