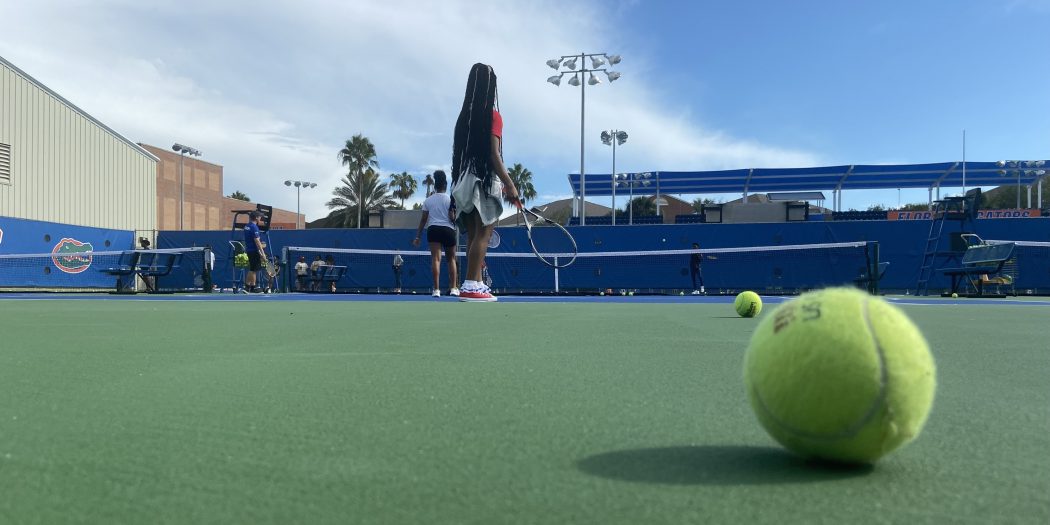 Fifty-eight students-- 26 in middle school and 32 in high school-- get the opportunity to play at Alfred A. Ring Tennis Complex. "After school programs are expensive,” Jennifer Staples said, “especially for working parents who are 9 to 5, and school gets out at 3. What are you going to do with those extra two hours? Where's your student going to go?" (Julianna Reichenbach/WUFT News)

From youth tennis to Wimbledon, many tennis players grunt as they hit the ball. Scientifically it gives them an advantage. They hit more powerfully, have more confidence and find rhythm.

One recent day, at the Alfred A. Ring Tennis Complex, the University of Florida tennis practice facility, Addison Staples, executive director of afterschool program Aces in Motion, and Larry Leschan, longtime volunteer coach, compared notes as one of the middle schoolers was finding her grunt.

“The grunt,” Staples said, “forces you to exhale.”

Aces in Motion strives to empower its current 58 participants through an afterschool program, combining tennis, tutoring, mentoring and counseling. And it appears to have some impact.

For the 2020-21 school year, Aces in Motion reports a 100% graduation rate for its primarily low-income Black students, along with a 100% postsecondary institution acceptance rate.

By comparison, the Florida Department of Education reported 86.4% of Alachua County students graduated for the 2020-21 school year. And for Black students, that number dropped to 82.5%. Moreover, a University of Florida Bureau of Economic and Business Research report said 72% of Black students in Alachua County are reading below grade level, while only 25% of their white peers read below grade level.

Jennifer Staples, Aces in Motion development coordinator and sister of Addison Staples, said the students are often not set up for success. The typical participant comes from a home in east Gainesville that falls below the poverty line. They may live with extended family.

“These students are vulnerable,” Jennifer Staples said. “We want to support them and make sure we give them the resources they need, free of charge.”

Between school buses and the two Aces in Motion vans, all students are whisked away to Duval Learning Academy five days a week after school. The students eat a snack and move on to an engaging activity. One to two days a week, they play tennis. Once a week, they practice at the University of Florida, thanks to the excellent relationship the program has with the Florida Gator coaches.

Aces in Motion is a nonprofit organization, separate from Alachua County Public Schools, that receives funding from grants, foundations, sponsorships and private donations. Students are accepted based on need and their families do not pay anything.

Jennifer Staples said the program loves getting kids in middle school, so they have more time to coach them up.

Emaney Hicks, 15, has been in the program for seven years. Recently, Hicks played with her partner against another duo. They lost.

“You want a rematch?” Hicks said. “Serve to me!” A point later, she reclaimed the winner’s side.

“Did he even want the rematch?” Hicks laughed with her partner.

When Hicks first joined the program, she said she did not even like tennis. “Coach Addison” helped her grow into the sport and come to enjoy it. He and the other coaches pushed her to extend that growth beyond technique.

“My behavior was off,” Hicks said, “I never really focused in class, but coming to AIM and having them push me harder made me realize, ‘You got this! I’m not going to give up.’”

The grunt gives players an extra oomph, on and off the hard court.

“Seeing that unmeasurable growth, that’s worth it,” Staples said, “[Hick’s] going to make us proud.”

Hicks said her coaches are very loveable, like mentor Terea Ward, the after school director.

Ward said when she first got started with Aces in Motion after graduating from college, there was a child she butted heads with. Ward said the girl told her she would never listen to her.

“Yesterday, she told me she loved me,” Ward said.

Ward was a part of the Boys and Girls Club growing up. Because of this, Ward said she knows what she’s getting herself into. That experience motivated her to help the children in the program.

“I was them when I was a kid, I went to a program, and now,” Ward laughed, “I’m willingly watching them.”

Everett provides therapy to some of the students during program hours. Having an in-house therapist removes cost and scheduling barriers for children needing treatment.

Whether it’s lacking a grocery store or afterschool programs, east Gainesville has its struggles. That’s why Aces in Motion works so hard to develop a comprehensive program to approach the whole student, rather than just coach them in tennis or tutor them. They learn life lessons in a myriad of ways.

The program hits many life segments: healthy relationships, physical activity, game days, gardening and sometimes a chef even comes in for members to make healthy family dinners together.

Leschan introduced King as someone he connects with because they both love art. King draws pictures, makes movies and writes poetry. King said the program helps students achieve their dreams by helping with homework and getting good grades.

King’s favorite memory at Aces in Motion is when the group rode a roller coaster together, facing a fear of heights. King tried to scream at the top but the exhale wouldn’t come out. At the bottom, King was finally able to release his pent-up emotions.

“It was a happy cry,” King said. “Even when you feel like you’re giving up at your hardest, don’t. Because that’s the time where the big moment finally comes in.”

Leschan said the people in this organization care about the kids and push them to overcome their obstacles.

“You have people that care and that are in your corner,” Leschan said, “They want you to do well, and I think kids really want to.”

Leschan mentored one boy through the program who is now a senior.  They began their teaching relationship in sixth grade. Leschan said he read a chapter to the boy and asked what just happened. His mentee didn’t know.

Leschan moved down to a page. He still didn’t know.

“He could read the words, but there was no comprehension at all,” Leschan said. “Let’s start with a paragraph.”

Sentence by sentence, the two broke down the book.

He got the mentee to bring his homework to Aces in Motion so they could work on it together. Leschan has communicated with the school’s principal to find ways to improve his mentee’s academics.

In high school, his grades went up. The improvements came in more than metrics.

The Aces in Motion players find their grunt during practice. Beyond the serves and swings, their peers and mentors give them that routine push, making their tennis game extra powerful and providing them the strength to achieve their dreams.

“When there’s someone rooting for them,” Leschan said, “it’s like ‘Oh yeah, I can do it’.”

Julianna is a reporter for WUFT News who can be reached by calling 352-392-6397 or emailing news@wuft.org.
Previous 2022 UF Homecoming Parade: How to watch live, the parade route and other details
Next Ian deals blow to Florida’s teetering insurance sector