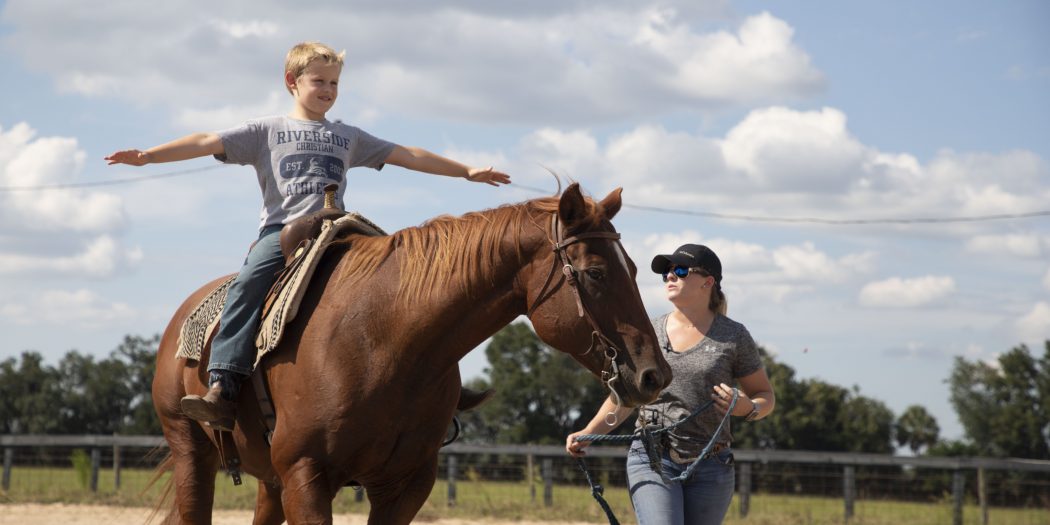 Daniel McKechnie, Savannah’s student, practices riding without holding his saddle during a session in September. This is practice for when he’ll have to hold the reins while riding on his own. (Kimberly Iglesias/WUFT News)

It’s third grade. Savannah Hudson has no idea a simple easter-egg-hunt would lead her to the love of her life. She opens up a small, plastic egg that holds the ticket to her future inside. Well, a coupon.

Inside the egg is a coupon for a free horse-riding lesson at Ridgeview Farm in Chiefland. Donna Quincey, the farm owner, would give her that lesson.

“I don’t think that I was super outwardly enthusiastic, but inwardly I was freaking out,” she said about her 30-minute lesson. “In a good way.”

Hudson said she doesn’t remember much of her first lesson other than loving it.

After that, she never looked back.

For the next 10 years, Hudson wouldn’t miss a lesson with Quincey unless she absolutely couldn’t make it.

“I was there probably at least 45 weeks out of the year for those 10 years,” she said.

She was obsessed with riding back then; she still is.

Hudson, now 22, teaches the very lessons she was a student of 14 years ago. For the last two years since Quincey retired, she’s run them by herself.

“I definitely, probably spend more time out there than I should,” she said. “And at the same time, not enough time.”

After being diagnosed with breast cancer, Quincey was no longer able to run the business like she used to. She said she would still be giving lessons with Hudson if it weren’t for that.

“She kind of went through a trial by fire,” Quincey said, talking about Hudson. “She came out great on the other side. It made me realize it was time for me to step back and for her to totally take the reins.”

The business wouldn’t have survived without her, Quincey said.

She feeds the horses every day.

She works and rides five to six days a week.

Including scheduling and after-hours work, Hudson is pushing 30–35 hours each week on top of being a full-time student at the University of Florida. She makes the 45-minute trip from Chiefland to Gainesville five days a week for school.

“I feel like a chicken with its head cut off some days,” she said, laughing. “Just running around, senselessly.”

Hudson said she doesn’t know if she could do it all if it wasn’t for her student and high school volunteer,

Rogers comes out to the farm to get the horses ready, feed them, keep up with barn maintenance and help set up lessons before Hudson arrives.

“If she needs any help, I’ll do it for her,” Rogers said.

The job is a breeze to Rogers, who said she strives to be like Hudson when she grows up.

Hudson said Quincey was a role model to her for 10 years. After that, she became her second mom.

“We talked about everything under the sun,” she said. “I couldn’t have asked for a better role-model and mentor.”

Hudson sees herself in a different light.

“Sometimes I feel like I can be a better mentor,” Hudson said, analyzing how she teaches.

All her students say otherwise.

As they ride alongside her, they gravitate toward the laughter-filled, charismatic blonde-haired girl. Everyone loves her.

“Savannah is adult-goals, bro,” Solmarie Perkins, one of Hudson’s adult students, said. “She’s strong-minded, strong-willed, and I think that this is what teaches children to be like that.”

The first time she cleaned a horse’s hooves, Perkins “freaked out” at the size of the animal and the uncertainty of what might happen.

But after hanging around Hudson, things changed. Perkins has gained a new confidence in herself that wasn’t there. She said Hudson taught her that.

Under Hudson’s wing, Marianna Bell, 6, has excelled at riding in a short time. After falling in love with horses at a rodeo, Marianna began learning with Quincey, right before Hudson took over. She became Reserve Champ at age 4 and a belt buckle winner at 5.

Hudson said she won’t stop there. Two to three years after graduating next spring, she plans on buying a property of her own and teaching there.

“It would be amazing if I could buy the property that I’m at now,” she said. “But I don’t know what Donna’s plans are for that property.”

Hudson said she’ll offer more services for her students like taking them to shows in the area.

For now, she said she’ll get one thing down then start working on the next.

“The sky’s the limit,” Quincey said. “As long as it’s what she wants, I hope she stays in the industry and enjoys it and prospers.”

Kimberly is a reporter for WUFT News who can be reached by calling 352-392-6397 or emailing news@wuft.org.
Previous Gainesville residents divided on exclusionary zoning elimination
Next Mental health impacts of disaster images