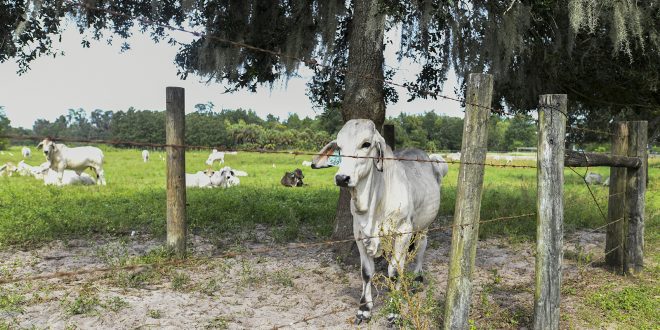 Identifying livestock is a crucial process in preparing for major storms.

Marlene Pinera has been a veterinarian for 37 years working with livestock and other types of animals. She now works at Affordable Vet Clinic in Newberry.

She said livestock can be identified by using ear tags or by spraying numbers onto the cattle using a can of non-toxic spray.

“You have to make sure that all of your animals are well identified,” she said. “In case the barn blows away and the cows are everywhere.”

Pinera said her clients tend to have barns that are only made to shelter the livestock from the sun and the rain. She said these types of structures won’t cut it during Hurricane Ian.

“Most people don’t have a secure barn to put them in, so they’re safer in a field than if you put them in a barn that is not reinforced,” she said.

Because most barns are not built to safely withstand hurricane winds, a lot of farms around the area will leave their cows to weather the storm in the field.

“Most of the time cows, when there is high wind and rain, will put their butts to the rain,” she said. “They hunker down, become small and throw themselves to the ground.”

Livestock owners who are leaving their cows in the field need to secure their fences, clear the field and cut any loose branches, Pinera said.

“The ideal situation would be to have a good-sized barn,” Pinera said.

She also said the inside of a barn should have several things, including fans, seven to 10 days’ worth of feed, emergency medication, halters and water that will be available even without electricity.

Pinera said people have been coming to her clinic to pick up anti-anxiety medication for their animals.

“When the pressure drops, they get very nervous, and they know a storm is coming,” Pinera said. “They are a lot smarter than we are.”

Evacuation of cattle across county and state lines can be tricky and requires a lot of paperwork.

“They don’t just let you move your cows past county lines,” Pinera said. “Dogs and cats have it made, not cattle.”

But the Florida Department of Agriculture and Consumer Services, Division of Animal Industry, sent an email that said that, in light of Hurricane Ian, it “is temporarily suspending the intrastate movement requirements for the transportation of animals fleeing from the areas expected to be impacted by Hurricane Ian.”

This will make it a little easier to transport animals — if people have somewhere to take them.

John Bird, the manager of a large dairy farm in O’Brien, Florida, said the cost of obtaining these permits is an obstacle to many livestock owners who cannot afford them.

“It makes it very difficult for the common person to preplan and afford to transport their animals,” Bird said. “It hinders or totally stops them from evacuating their animals.”

He also said that this storm has been so unpredictable, it has been even harder to decide where to take livestock. As for Bird and his farm of 40 cows and seven horses, they will be staying put. He said he will leave all his livestock out in the field.

“We tend to overthink things, and we end up hindering their abilities to help themselves,” Bird said. “They know what is best, and they are very smart.”

Bird also said he will be painting his phone number onto all of his livestock with livestock paint in case any separation happens.

Another concern that needs to be addressed in preparation for the storm is keeping power on. This is important because electricity pumps water from the wells for the livestock to drink.

Bird said he has lots of backups at his home ranch to avoid any problems after the storm. He said he has double redundancy to maintain power.

“Water supply is one of the most essential things that panics people,” Bird said. “At the house, we have three generators and the ability to run a generator manually using horses.”

He recalled that during his time volunteering on rescue teams after Hurricane Charley, a substantial number of equine died. He said this happened because people put their animals in barns and stalls that were not suited to withstand the storm.

“The intent of the heart was to protect their animals which is tragic,” Bird said.

Like Bird, Sheena Drost, the board secretary and office manager for Critter Creek Farm Sanctuary, wrote in an email that she will not be locking the animals in any structures for the same reason.

“You’re not supposed to lock up large animals during a hurricane,” Drost said. “Doing so is dangerous because the structure could collapse.”

She said the bovines and equines will be out in the field, and the pigs will be in their pens with access to a shelter.

“The shelters are relatively small and unlikely to seriously injure the pigs if they collapse,” Drost said. “We can’t lock the pigs inside; it’s important that they be able to escape if needed.”

She said at Critter Creek Farm Sanctuary they clear the fields of anything loose to ensure nothing flies around during the storm and injures an animal.

Drost also said making sure there are backup plans for the generators is important so the animals on the farm don’t run out of clean drinking water.

She said fencing, power, and preventing injuries are this sanctuary’s main concerns for hurricane preparation.

“We’ve got our fingers, toes, and hooves firmly crossed that this storm doesn’t cause too much damage or hardship to anyone and that we all escape relatively unscathed,” Drost said.

Katalina is a reporter for WUFT News who can be reached by calling 352-392-6397 or emailing news@wuft.org.
Previous Gov. Ron DeSantis details the state’s emergency response plan to power outages and rescues
Next People trapped, hospital damaged after Ian swamps SW Florida

Downpours could lead to localized flash flooding through midweek along the I-95 corridor, potentially slowing …