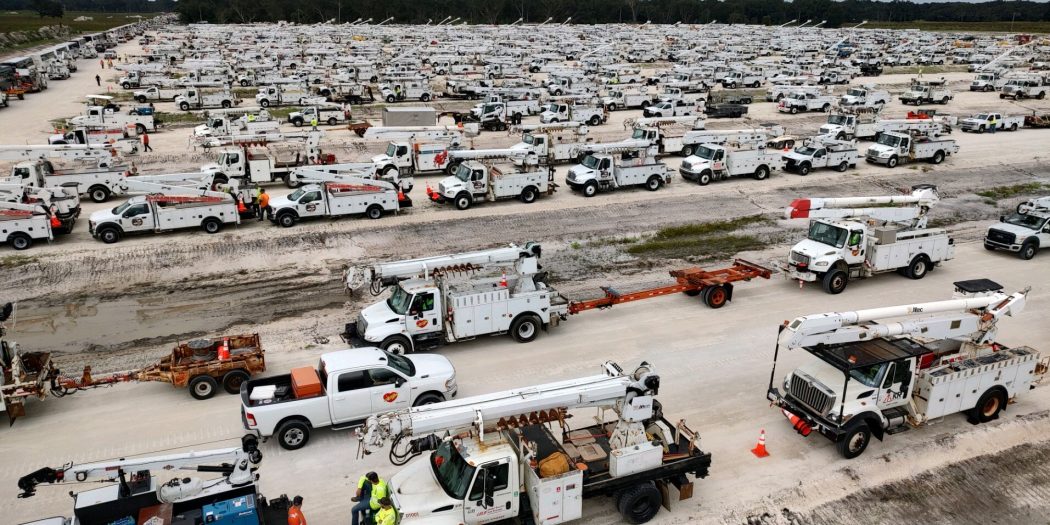 Utility workers gather near The Villages as they await the end of the storm. Photo courtesy of Duke Energy.

More than 1.8 million Floridians are without power after Hurricane Ian made landfall Wednesday afternoon, according to the utility outage dashboard at PowerOutage.us.

Earlier in the day, Gov. Ron DeSantis had called an initial 200,000 outages a “drop in the bucket” compared to total number of Floridians who will be affected by power outages by the time the storm passes.

Utility companies have crews standing by across the state to begin repairing power lines as soon as the storm passes.

Here are updates about line workers and staging areas from a few Florida utilities:

Duke Energy has about 10,000 line workers on standby from five staging areas across the state, including one south of The Villages on State Route 471. Hundreds of power trucks will be deployed from that location. Workers have come from Indiana, Kentucky, Ohio, the Carolinas and even Ontario, Canada. Duke’s live power outage map is here.

Clay Electric sent out an announcement to its customers warning them to prepare to be without power for an extended period of time. Clay expects the impact of Hurricane Ian to be similar to that of Hurricane Irma in 2017.

Spokesperson Kathy Richardson said Clay has about 100 confirmed in-house line workers and 235 out-of-house line workers from mutual aid agreements. The utility is expecting to add more workers as the storm continues. The line officers will be based out of Clay’s six district offices until they are deployed, including from an operations center near Clay’s Keystone Heights headquarters.

Richardson says Clay estimates the damage will be primarily east of Route 301, more in Gainesville than Salt Springs. More crews will begin arriving at the Gainesville district office Thursday.

Clay will not be reporting estimated outage restoration times, but will still send outage alert notifications to registered MyClayElectric members. Clay says the best way to report outages is through its MyClayElectric app. Clay’s live power outage map is here.

Silas is a reporter for WUFT News who can be reached by calling 352-392-6397 or emailing news@wuft.org.
Previous Gainesville grocery stores struggle to keep up with demand ahead of storm
Next Gov. Ron DeSantis details the state’s emergency response plan to power outages and rescues