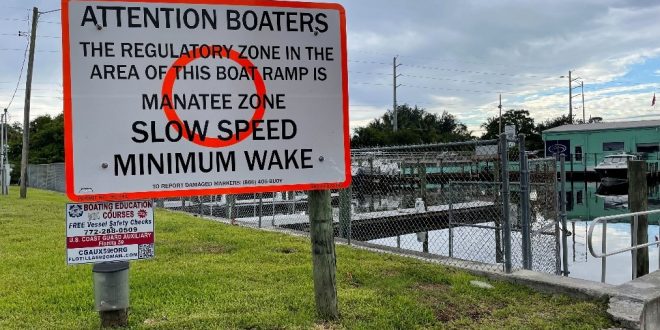 Congress passed legislation in May, aiming to focus federal responses to South Florida’s harmful algae blooms, but local officials worry the bill may not be a timely enough effort to combat the decreasing manatee population.

The group would have 540 days to come up with a comprehensive plan before submitting their first assessment to Congress and President Joseph Biden. Then, a final examination would be conducted over the course of three years after the federal task force has assessed federal and state agencies, academia as well as the private industry.

The U.S. House of Representatives passed the act on May 11, and the bill specifically identifies the regional waters along Biscayne Bay, the Caloosahatchee Estuary, Florida Bay, Indian River Lagoon and the St. Lucie River Estuary.

There is a combination of factors that causes blue-green algae blooms, such as excess nutrients that come from runoff within urban areas or discharge from wastewater treatment facilities, according to the Florida Department of Health.

Blue-green algae can cause rashes, vomiting or nausea among people, and these specific blooms can also block sunlight, killing seagrasses that manatees eat to survive. Blue-green algae has been present along Martin County’s waterways since May 2016.

Patrick Rose, executive director for Save the Manatee Club, said although he feels the federal legislation “will do good” to help address certain issues, state and federal leaders already know much about what needs to be done.

“It’s important to do those kinds of studies, make the recommendations and evaluations,” Rose said. “But, quite honestly, we are at a point where we know a tremendous amount about what needs to be done.”

He said the studies that would be conducted within the task force could help to uncover a deeper understanding of what toxins are coming out of Lake Okeechobee through the St. Lucie Canal, but when it comes to addressing issues of the Indian River Lagoon at large, we already know the answers.

Rose added that over the next 10 to 20 years, there will be a need for about $6 billion worth of funding, and we already have identified the efforts to take action.

“I don’t think we have years to figure out what to do in the Indian River Lagoon. We have got to do something now,” he said.

Save the Manatee club partnered with the Center for Biological Diversity and Defenders of Wildlife early this month to sue the U.S. Environmental Protection Agency over the lack of coordination with the Florida Fish and Wildlife Conservation Commission to improve water quality along the Indian River Lagoon.

The lawsuit alleges that the EPA’s water quality standards set in 2009 were not being “adequately followed or enforced.”

John Maehl, the ecosystem division manager for Martin County, said their county in particular tries to stay as science and fact-based as possible in order to better understand the problems with the local manatee population that thrives there.

Maehl argues that it is not known what are the most impeding problems devastating the manatee population.

“We don’t want to get myopic and put blinders on one issue when we don’t know for certain that one issue is the cause or even if two issues are the cause. At the end of the day, however, there does appear to be a massive die-off of seagrasses lagoonwide,” he said.

At the moment, one of the main focuses of the county is turbidity, or murky water that interrupts the sunlight for seagrass to grow. Seagrasses are completely dependent on sunlight, and it only takes a few days without it before the grasses – begin to die, according to Maehl.

He also emphasized that excessive nutrient problems creating harmful algal blooms are still a prevalent problem in the area. Other potential culprits can also seep through stormwater, wastewater streams or septic systems into the lagoon, so it can be difficult to pinpoint one exact cause.

Although Maehl disagrees with Rose who states that we know the actions necessary to address manatee restoration efforts, both say that the time to act is now.

“We have been emphasizing that we need to be diligent about monitoring, testing and doing the science, but at the same time also recognize that we are kind of in an emergency situation,” Maehl said. “We can’t wait 15 years until all the science is in and then start acting.”

As the bill waits for the president’s signature, local officials feel that this legislation is bringing together federal, state and local efforts in a cohesive attempt to restore the seagrass and manatee population.

“This issue has brought together not just governments but local NGOs and the general populous that no other issue really has,” Maehl said.

Elise is a reporter for WUFT News who can be reached by calling 352-392-6397 or emailing news@wuft.org.
Previous Student journalists say they’re fighting for First Amendment rights in a central Florida school
Next Will high gas prices affect Floridians wanting to evacuate ahead of hurricanes? AAA survey suggests maybe