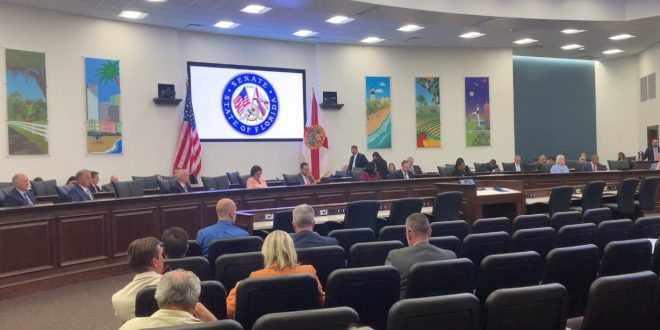 Lawmakers debate in the Senate Committee on Appropriations on Monday during the opening day of the special session to resolve the state's property insurance market problems. (Valeria Ortega/WUFT News)

May 24, 2022 Government and politics, Statewide

The unsteady Florida property insurance market led the state’s legislature on Monday to propose a reinsurance program on the opening day of a special session.

The program, known Reinsurance to Assist Policyholders (RAP), passed the Senate Appropriations Committee almost unanimously as its first step toward becoming law. The bill calls for $2 billion from the state’s General Revenue Fund to create the RAP program and establishes new rules to stabilize attorney fees and control coverage denials to property owners.

“We have put $2 billion in there for reinsurance, and that is going to help,” said Sen. Linda Stewart, R-Orlando. “But it’s only good for a year, so we are going to have to look at that again and see how we can try to bring those rates down.”

The funds were allocated to the Florida Hurricane Catastrophe Fund (FHCF), which allows the reinsurance for hurricane losses to those insurers that participate in the RAP program. The bill explains the program’s coverage stating that “90 percent of each insurer’s covered losses and 10 percent of their loss adjustment expenses” will be reimbursed during the contract year.

Sen. Jim Boyd, R-Bradenton, the sponsor of the proposals, recognized during Monday’s committee debate that the insurance rates for homeowners would not have an immediate decrease. Throughout the debate, Boyd said that a significant reform regarding property insurance is fundamental to improving the market in the state of Florida in the long run and helping people to keep their homes.

“We have been dancing around this issue for many years; that’s why we are in a special session today,” Boyd said. “I don’t believe we can be in a worse situation than the one we have right now.”

Gov. Ron DeSantis summoned lawmakers to this special session to consider some issues that affect Floridians and are concerning in the Sunshine State, where hurricane season officially begins June 1. The issues have wide-ranging impacts for the insurance industry and property owners alike.

The return of hurricane season is putting pressure on lawmakers to address problems regarding roofing and regulations. Florida has experienced multiple particularly damaging storms in the last few seasons, and experts have predicted another “above average” year of storms.

Senators from both the Republican and Democratic parties acknowledged Monday they are focusing on solving these issues over the course of years, but not necessarily months.

“This will help in the long run, but it’s not going help in the short run,” Stewart said.

Similarly, Boyd said during the debate they are focusing on the insurance rate-making process, and that will take some time.

The reinsurance bill will also require consideration from the Florida House, which will meet on Tuesday to analyze it. Both the House of Representatives and the Senate will have until Friday to come to an agreement on any piece of legislation and send it to the governor’s desk.

Valeria is a reporter for WUFT News who can be reached by calling 352-392-6397 or emailing news @wuft.org.
Previous A onetime family farmhouse in Gainesville will soon open as an educational nature center
Next The Point, May 24, 2022: Florida special session opens with discussion of reinsurance bill