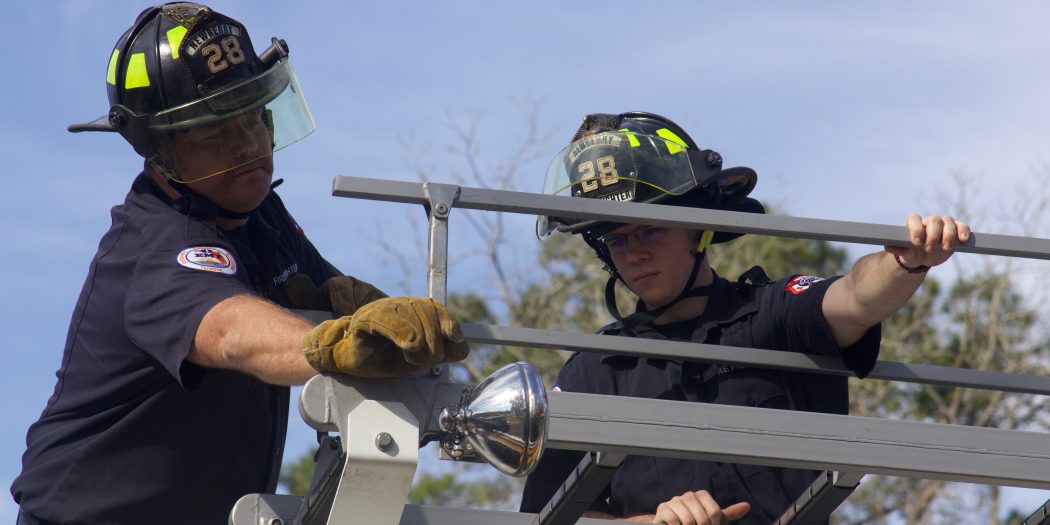 Firefighters emergency medical technicians Amby Cason (left) and Samuel Lesak spending time on the Quint 28 fire engine at Newberry Fire Rescue Station 28. “It’s not a truck we use often, so it gets the cobwebs off,” said David Voigt, a firefighter medic. (Antonia LaRocca/WUFT News)

Newberry Fire Department crews are sometimes short-staffed when their members must leave its lone station to go to a training center in Gainesville.

“You got units that are leaving or reducing your manpower to go train across county,” Lt. Kevin Farr said recently.

Newberry firefighters travel 45 minutes on average to get there for training that lasts around four hours about every other month, Newberry Fire Chief Ben Buckner said. There have been times – when not enough firefighters are on-site – Buckner has helped run emergency calls with the remaining crew members because of the reduced staffing, he said.

To solve this issue, the city and county have partnered to bring a firefighter training facility to the western part of the county, officials from both jurisdictions said.

“This training facility makes us better at what we do and how we do our jobs to protect (residents) and their property,” Buckner said.

The proposed facility would be near Newberry’s wastewater treatment plant, with construction beginning ideally by the end of the year, City Manager Mike New said.

“If we work together, we may be able to marshal resources that we can’t do independently,” New said of the partnership with the county. “It’s just the optimal way to spend the public’s dollars.”

The site for the training facility would be on at least 2 acres of land, Buckner said. With planning still in the early stages, the building’s size and design are not finalized, but it will meet regulatory requirements and all aspects needed for training, the chief said.

The center would provide the western part of the county with more accessibility to training, Buckner said. Additionally, the plan is to open it up to neighboring cities and to contact regional partners and nearby counties to see if they wish to train at the center, he said.

“We want to utilize it, you know, to its maximum potential to train the firefighters in the things that they need to be trained in,” Buckner said.

Alachua County Fire Rescue Chief Harold Theus said Newberry and county staff are working on an official written partnership agreement, with the city to pay for utility infrastructure, while the county has set aside $250,000 for construction.

“I think that when communities work together, people benefit,” Theus said.

Newberry Mayor Jordan Marlowe said this partnership is one of many projects that the county and Newberry are working on well together.

“They need a facility. We have a site,” Marlowe said. “That’s a perfect opportunity for us to come together and see where we can assist each other.”

Shelley Van den Neste remembers investigating options and finding a lack of convenient training choices when her youngest daughter was once interested in becoming a firefighter.

Her daughter pursued a different career, but Van den Neste, owner of Sunrise Farms Sport Horses in Newberry, said she supports having a new firefighter training facility in her city.

“It just doesn’t seem like an intrusive type of training facility to our small little community,” Van den Neste said. “I’d welcome it.”

Mark Merwitzer, president of Florida Not One More, a student-led group advocating for safer roads, said he hopes a new facility would improve fire response in Alachua County.

Farr is looking forward to having a nearby training center.

“If you’ve got one on this side of the county …” the lieutenant said, “you can stay as a crew – and in service – and better provide for the (people) of Newberry if there’s an emergency that pops up during the training.”

Antonia is a reporter for WUFT News who can be reached by calling 352- 392-6397 or emailing news@wuft.org.
Previous Federal appeals court wades into Ocala prayer vigil fight
Next The Point, April 28, 2022: UF fired its soccer coach after one season