Although the number of juveniles arrested in Alachua County has decreased since 2019, community members are feeling the effects of teen violence. Law enforcement is finding alternative ways to address the issue as crimes involving firearms continue to rise, according to Alachua County Sheriff’s Office spokesperson Art Forgey.

Joshua Franklin has his eyes set on the ball – ready to score.

Donned in a red hoodie and a bright smile, this 16-year-old is ready to take the world by storm.

Although the Gainesville High School student has a love for basketball, the real goal he’s preparing to score is making the city he lives in a better place.

Franklin would like to see less violence in the community; he believes a lot of strife can be avoided by handling conflicts more professionally and maturely.

“I would like to see just less violence in the community,” he said. “A lot more things can be handled more professionally or more maturely. If people just came together talking about a situation or just to disagree and let the situation go.”

One of the issues he has noticed is around people his age.

“In school, especially high school, there’s a lot of stuff going on,” he said. “People can sometimes be easily influenced.”

But Franklin isn’t the only teenager to notice this. At an Alachua County Commission meeting in September 2021, two students brought their concerns over youth getting involved in gangs and participating in gun violence. They noticed students around their age being bribed, threatened or willing to join gangs. 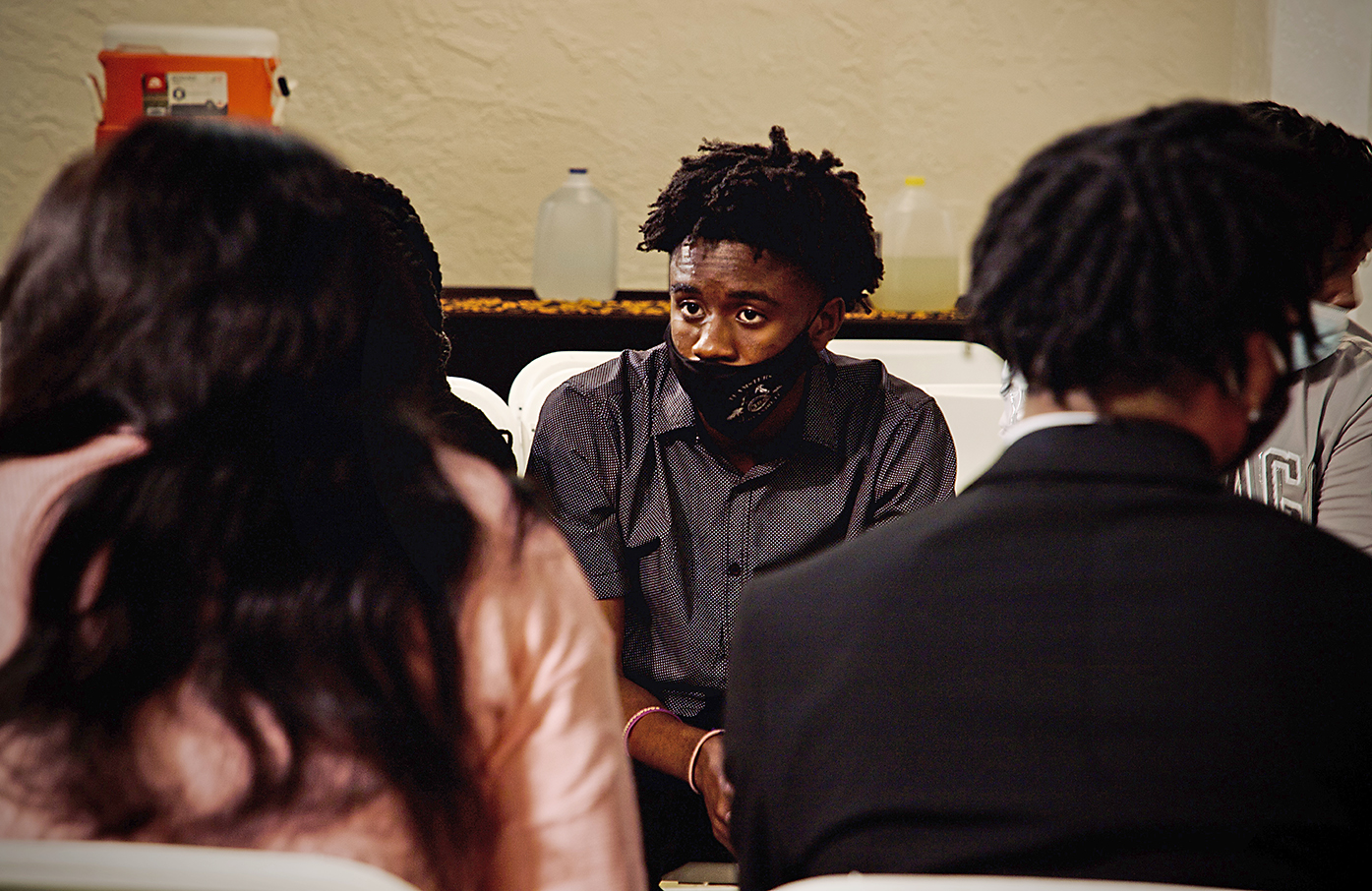 Children are being put in bad situations where they could kill other people or possibly end up dying at a young age, Sydnee Stocker said. Some of these students are prompted to go down this path to gain a sense of belonging and appreciation. One of her friends, Christopher Scott, was shot and killed at a 15-year-old’s birthday party over the summer.

“His brother lost a brother. His mother lost a son, and we lost a friend to kids that think that’s where their life should go and that’s the type of people that they want to be,” she said.

Listen to an excerpt of  Sydnee Stocker’s testimony and public comment from an Alachua County Commission meeting in 2021:

Over the past three years, the Alachua County Sheriff’s Office has seen an increase in juveniles committing violent crime, said office spokesperson Art Forgey. Typically, many of the incidents are traced to people involved with gangs.

“The number of juveniles that have been involved in gun crimes is very concerning,” he said. “It’s concerning to see when it reaches down to levels of our youth being involved with gun crimes and carrying guns and you know, not necessarily having fully developed brains because they’re still growing and choosing to use guns to solve conflict instead of conflict resolution.”

In 2019, according to the High School Risk Behavior Survey, 13.2% of students in the United States carried a weapon at least one day 30 days prior to taking the survey. In Florida, this was 12.7% of high schoolers. Based on the survey, a weapon is classified as a gun, knife or club.

However, according to the Florida Department of Juvenile Justice, the amount of juvenile arrest intakes in Florida has continuously declined since 2016. From the 2016 to 2017 fiscal year, there was 64,919 youth intake of arrests compared to 31,612 in 2020 to 2021.

This is for people 10 to 17 years old and intake means the screening and assessment of a juvenile who allegedly violated the law or court order. According to the department, arrest for juveniles means one is taken into custody based on probable cause and charged with a law violation.

There are multiple reasons that could explain the decrease.

From the perspective of the Alachua County Sheriff's Office, which covers unincorporated areas of the county, there has been a push for other resolutions for youth. This could be civil citations, the teen court program and diversionary programs.

“Those programs are all well and fine, but I think within the last year, there’s probably been more juveniles that have been adjudicated as adults and taken from juvenile detention over to the jail and booked as adults for crimes that they face,” Forgey said.

An example is a 17-year-old who was arrested on Feb. 18, Forgey said. His name was Noah Hayes and it was his second arrest in six days. He was on probation for burglary charges that he admitted to, charged as an adult and was found guilty. He was arrested again on Feb. 12 on another burglary charge then released. The most recent arrest was Feb. 18 when he was charged with possession of a firearm by a person convicted of delinquent acts along with two other charges.

“That’s the kind of stuff I’m talking about when they’re adjudicated as an adult, there’s typically very violent history, and they keep progressing through the system,” Forgey said. “Obviously nothing is working, and so it’s time to try something new and try these folks as adults.”

According to Forgey, the issue of youth violence is not unique to Alachua County. Also, just because a violent crime is committed that does not necessarily mean it was gang-affiliated.

However, those across the community are working to reduce the effects of teen violence overall.  Following the county commission meeting in September when students expressed concerns about youth being involved in violence, community leaders created a youth activities advisory council.

After seeing a need to decrease violence in the county, Joshua Franklin decided he wanted to participate in the council. He was inducted and became a member on Feb. 21.

“I would like to see just less violence in the community,” he said. “A lot more things can be handled more professionally or more maturely. If people just came together talking about a situation or just to disagree and let the situation go.”

He knows how having fun activities like taekwondo, acting and basketball helped keep him busy.

“I didn’t have time to try to look for something to get into,” he said.

Franklin hopes the council can help create more activities for people to join as a way to keep teenagers productive in positive ways. As a council member, he’s representing the Star Center Theatre, which he has been involved in since he was around 8 or 9 years old.

“One thing that is important about this whole council is we’re here to help,” he said. “We’re not here to judge or push our beliefs or our opinions on you.”

Meleah is a reporter for WUFT News who can be reached by calling 352-392-6397 or emailing news@wuft.org.
Previous Bill reshaping Alachua County Commission progresses in the Florida Legislature
Next Mayor Lauren Poe gives his last State of the City Address, covering equity and inclusivity