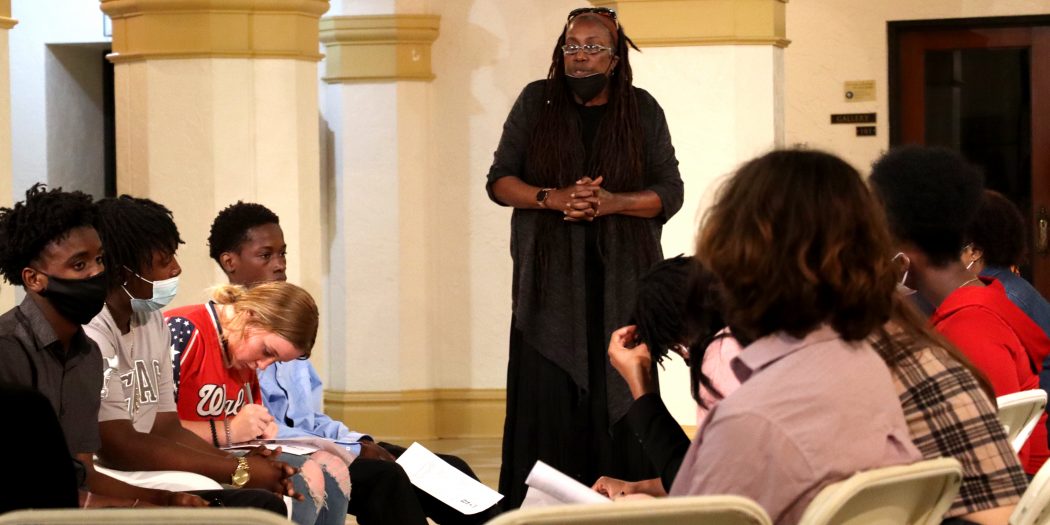 NKwanda Jah, executive director of the Cultural Arts Coalition, speaks with the newly inducted members of the Youth Advisory Activities Council at the Thomas Center on Feb. 21. (Alan Halaly/WUFT News)

Carter, 40, lives in Waldo, a town of less than 1,000 that she said has a lack of resources for young people like community centers, tutoring services and transportation. On Monday night at the Thomas Center in downtown Gainesville, she watched as Elijah, an eighth-grader at Howard Bishop Middle School, was inducted into the newly formed Youth Activities Advisory Council.

“He inspires me and encourages me even in the process of losing his father in December,” Carter said. “He still carries his will.”

The group consists of nearly 20 middle and high school students from every corner of Alachua County, most of whom go to school outside of Gainesville. Along with other programs like the Gainesville Police Department’s One Community initiative, it aims to provide a space for young adults to participate in group activities to help curb rising youth gun and gang violence.

NKwanda Jah, the 68-year-old executive director of the Cultural Arts Coalition, has been at the forefront of coordinating the group. Jah said she originally went to an Alachua County Commission meeting in August to propose the idea.

The commission was receptive to her presentation, she said, and officials suggested some of the students apply to be considered to become a part of its advisory council.

She couldn’t imagine, however, that the average middle or high school student would be willing to engage meaningfully in bureaucratic meetings about topics like zoning.

The group, she said, is intended to have a positive impact on the careers and lives of Alachua County students.

“We were losing children in our community to violence and we weren’t going to just sit back on the sidelines and just talk about it,” Jah said, adding that vulnerable youth often turn to gangs to provide steady income.

Judge Gloria Walker of the Eighth Judicial Circuit shared her journey as a first-generation student who took a nontraditional path, starting off shampooing dogs before beginning community college and eventually ending up at the University of Florida. She led the students in an oath that solidified them as members of the council.

“As Oprah says, you have to dream big,” Walker said. “Right?”

Also among those who took an oath Monday evening was Marihelen Wheeler, chair of the Alachua County Commission. Along with parents of council members and leaders like Gainesville Mayor Lauren Poe and Santa Fe College President Paul Broadie II, Wheeler swore to pay attention to the voices on the council.

Wheeler, a former middle school teacher, said the initiative is a great start to helping combat violent crime among youth.

“Hopefully, the community will get insights from this group that we didn’t have, hadn’t thought of or hadn’t taken as seriously as we should have,” she said. “I’m hoping that these young people will be able to educate us and make us do better.”

In his address to the students as the new community leader liaison, County Commissioner Charles Chestnut said he’s glad to have the chance to hear from a cross-section of young people whom county policy affects.

After meeting each other for the first time, the group of students ended the night sitting in a circle, exchanging phone numbers and discussing what each of them would like to take away from their time together. They will meet within the next month or two at community centers throughout the county.

Kristen Ivey, 16, a Hawthorne Middle High School 10th-grader, said her aunt, Hawthorne Mayor Jacquelyn Randall, got her involved in the council. She said because of the town’s proximity to Gainesville, gang violence is somewhat common among young people in her experience.

Ivey said she was excited to see so much diversity of race, age and hometown on the council.

“Different minds can make a better community and a better world,” Ivey said.

Joshua Franklin, 16, a Gainesville High School sophomore, said being on the council with access to elected officials and other mentors like Walker will allow for young people to have more of an input on county policy.

“When we try to speak up and say something, they don’t listen,” Franklin said. “So, I feel like it’s very important because it gives us a voice and allows us to be heard.”

Alan is a reporter for WUFT News who can be reached by calling 352-392-6397 or emailing news@wuft.org.
Previous Florida House discussing a bill that would change how Alachua County voters elect county commissioners
Next The Point, Feb. 22, 2022: Alachua County ambulance crews responded to a record number of calls in 2021