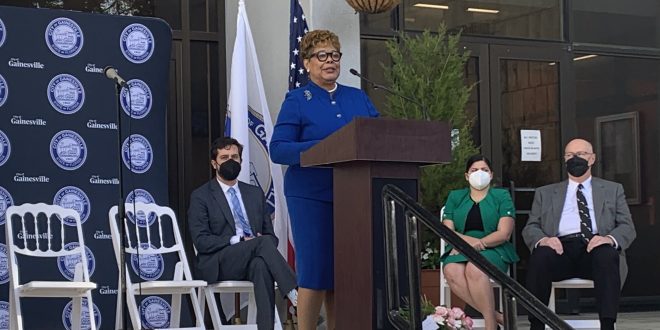 Holding a Bible her mother gave her 49 years ago, Cynthia Chestnut – the former mayor and state representative – on Thursday once again took an oath of office, this time to fill the vacant at-large seat on the Gainesville City Commission.

Chestnut, 72, assumed the position previously held by Gail Johnson, who announced her resignation in August. Chestnut first ran for the seat in the November special election, but it wasn’t until the Jan. 25 runoff that she won over newcomer Matt Howland.

Mayor Lauren Poe praised Chestnut as he presented her to the 80 people gathered on the steps of City Hall to see Judge Gloria Walker of the Eighth Judicial Circuit administer the oath.

“I cannot think of a more qualified and exceptional person to say the words that she is about to say,” Poe said.

After thanking Johnson for her service, Chestnut – who in 1987 became the first Black woman to serve on the commission, and in 1989 the city’s first Black female mayor – looked back on the decades she has spent serving Gainesville.

“There is always room for growth,” she said. “After reflecting on the journey and buildup to this very moment, my biggest takeaway is that, on the campaign trail, I still continue to learn so much about our city, its people and what they care about.”

Chestnut also served five terms as a Florida representative from Gainesville as well as eight years on the Alachua County Commission.

WUFT · Cynthia Chestnut is sworn in

When City Commissioner David Arreola ran for his seat in 2017, Chestnut was in her third year as chairwoman of the Alachua County Democratic Party.

“I never imagined I would be serving with her on the City Commission,” said Arreola, who has announced his candidacy for mayor. “It’s really humbling. It’s, to me, sort of a reminder that there’s just a lot of opportunity to serve when it comes to elected office.”

In her remarks, in which she said was touched that her swearing-in occurred during Black History Month, Chestnut promised to prioritize issues such as protecting the environment, preserving neighborhoods and lowering personal utility costs. Above all, she said, she would strive to give members of the community a chance to voice their concerns and ideas.

“I promise to always listen to you,” Chestnut said. “I promise to hear the concerns of the people of Gainesville and advocate for them inside the walls of our City Hall.”

Among those at the 20-minute ceremony was Sallie Harrison, 73, who moved to the city from Mississippi in 1971 and has worked on each of Chestnut’s campaigns for office since 1974.

“Cynthia Chestnut means what she says, and she says what she means,” Harrison said.

Harrison added: “She is a guardian of the city of Gainesville. She’s been there, and she will always stand up for people who are trying to do the right thing in the city.”

Several members of Chestnut’s family, including sons Christopher and Chuck Chestnut, her brother Michael Moore, and her sisters Jane Hall and Barbara Austin, were also present.

Chestnut also said every citizen deserves a stable government and swore to dedicate every day toward earning the city’s trust.

“The hard work begins now,” she said. “You know it. I know it. we all know it. So let’s continue working together for a better Gainesville.”

Veronica is a reporter for WUFT News who can be reached by calling 352-392-6397 or emailing news@wuft.org.
Previous New research suggests delays in autism diagnosis for Black children may reflect providers’ racial biases
Next The Point, Feb. 18, 2022: Cynthia Chestnut sworn in as Gainesville city commissioner