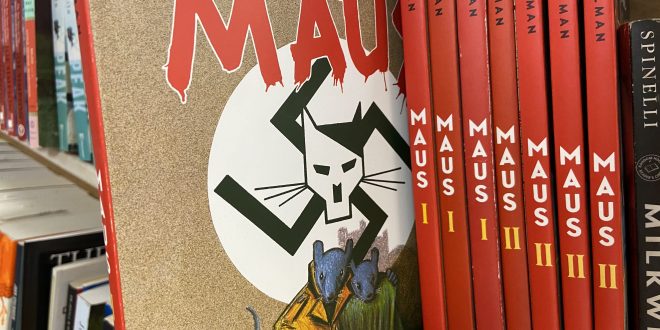 A copy of “Maus I,” among others at Book Gallery West. The book by second-generation Holocaust survivor Art Spiegelman is the only graphic novel to have received the Pulitzer Prize. (AJ Bafer/WUFT News)

Karyn Steinberg was about 6 years old when she saw a film depicting the Gestapo tearing a couple away from their two children, who hid under a stove.

Steinberg, now 44, of Apopka, was on an outing with others from her temple to a Holocaust museum near Orlando. She recalls checking out two books from the museum’s library, and also the nightmares that led her to create a hiding place to shelter herself from them.

A few years later, a schoolteacher lent Steinberg a copy of “Maus I,” by Art Spiegelman. It was graphic, yet to her as a child also a more accessible accounting of the Holocaust than Anne Frank’s “The Diary of a Young Girl.”

So when Steinberg heard of a Tennessee school board’s decision to drop the novel from its curriculum, she felt troubled – just as she would with restricting access to any book.

“If you don’t like it, don’t read it,” said Steinberg, an Orange County senior community corrections officer.

“Maus” may have topped Amazon’s bestseller list after the recent publicity, but north central Floridians aren’t scrambling for copies. Both Levy and Marion Counties’ public libraries haven’t had any recent “Maus” orders, according to library administration officials.

The Pulitzer Prize-winning book tells the story of Spiegelman’s relationship with his father, a Holocaust survivor, by depicting Jews as mice and Nazis as cats. The McMinn County School Board reportedly objected to eight curse words and nude imagery of a woman, used in the depiction of the author’s mother’s suicide, according to NPR.

Minutes from the McMinn school board’s meeting on Jan. 10 may reveal that the resolution was never an outright banning of “Maus,” but, according to NPR, the headlines have definitely caused the book to be in greater demand, and in some cases, supply nationwide.

Book Gallery West, on Northwest 16th Boulevard in Gainesville, was fully stocked last week with “Maus,” but has only sold around two copies since the controversy arose last month.

That’s about average, said Evelyn Dodge, 20, a University of Florida psychology sophomore and one of the store’s bookkeepers.

Book Gallery West did sell out of “Maus” last semester, however, when Fi Stewart-Taylor added it to her comics nonfiction class reading list at UF.

An English graduate student and teaching assistant, Stewart-Taylor, 30, said she chose to cover it in her course because it’s a classic graphic novel. To her, the matter is another instance of school boards trivializing marginalized writers.

“’Maus’ is going to continue to be read,” Stewart-Taylor said, “but there’s maybe this broader question about who’s deciding what for children.”

Dodge, who also looks back on her adolescent experience with the book fondly, said removing “Maus” and similar literature gives credence to antisemitism. It also reminded her of attempts near her home in Flagler County to censor literature from marginalized Black and LGBTQ writers last December. To her, it’s hard to reconcile such restrictions happening in 2022.

Beyond pushing away discomfort, the choice is an effort to manipulate the suffering the Jewish people experienced, Zinn said. This push is underscored by attacks like the hostage crisis at a Texas synagogue and Orlando’s neo-Nazi rallies in January, he said.

“There’s a real need to work together to combat ignorance, hatred, antisemitism, and education of the Holocaust is a core focus of that,” he said.

And though it speaks to an antisemitic trope of Jews as purveyors of pornography and the “pollution of culture,” Norman Goda, 60, a professor of Holocaust studies and director of UF’s Center for Jewish Studies, said the move isn’t inherently antisemitic.

The debate centered on whether to use “Maus” as the anchor piece in the county’s Holocaust module, Goda said, and it would have still included survivor testimonies. The board discussed the use of eight swear words and one nude panel in a text of about 300 pages. It considered redacting those sections but didn’t want to be stalled by copyright laws. The decision was made not to ban the book, but to substitute it with another undetermined piece.

Goda said the decision nonetheless portrays a willful ignorance of the novel’s uniqueness. He said he would be the first to say that Hollywood “burned the envelope” on nudity and graphic sex. But “Maus,” a masterwork, is not part of that problem.

State Rep. Emily Slosberg-King (D-Palm Beach) said the McMinn decision should concern Floridians. She compared it to pending legislation such as the “Individual Freedom” bill,  which seeks to limit discussion of race and gender in schools and businesses. Slosberg-King said it is an example of the government’s inadequate treatment of vital social conversations.

Slosberg-King, co-chair of the Florida Jewish Legislative Caucus and regional vice president of the National Association of Jewish Legislators (NAJL), said “Maus” plays a critical role in Holocaust education and should never be banned outright from school curriculums.

“Actions and legislation that ban what people can learn and what they can think about is wrong,” she said.

State Rep. Michael Gottlieb (D-Broward) said he remembers learning of the Holocaust’s horrors when having his bar mitzvah in eighth grade. Gottlieb, the Jewish caucus’s other co-chair and a NAJL member, said exposure to difficult themes can guide children into young adulthood.

If 13-year-olds get upset reading about children their age and younger being killed, “all the better,” he said, particularly if it helps spur them to take a stand in support of social justice.

“That’s the whole point of this type of genocide,” Gottlieb said. “It’s offensive.”

The number of antisemitic incidents over the last six years was historically high, according to Lonny Wilk, interim regional director with Florida’s chapter of the Anti-Defamation League (ADL). ADL has tracked antisemitic incidents nationwide annually since 1979. The yearly national total peaked in 2019 before dropping by 4% in 2020.

In Florida, antisemitic incidents rose by 40% the same year.

Wilk pointed to efforts to trivialize the Holocaust in recent years, with demonstrators comparing mask and vaccine mandates to the systematic elimination of 6 million European Jews.

He said policymakers have failed to hold each other accountable on both ends of the political spectrum. The concern is that prohibiting conversations literature like “Maus” generates and allowing antisemitism to escalate makes children more prone to forget that history.

“We need strong, full-throated denunciations of antisemitism, frequently and without reservation,” Wilk said.

AJ is a reporter for WUFT News who can be reached by calling 352-392-6397 or emailing news@wuft.org.
Previous The Point, Feb. 8, 2022: Exploring UF’s contentious history of open discourse on campus
Next Newberry is growing, and residents are taking note