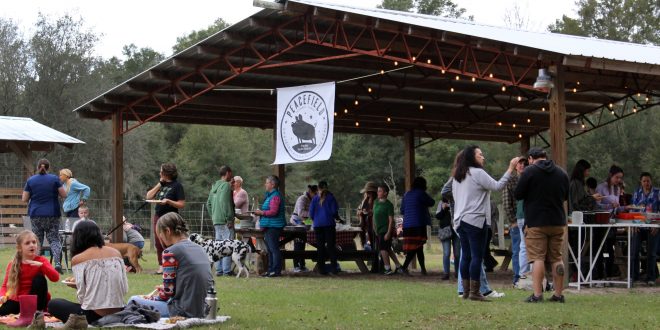 Participants gather to eat and talk around the Peacefield pavilion in Newberry on Sunday. (Julian Rush/WUFT News)

Animals sat next to people at a vegan feast in Newberry

About 60 people gathered at the sanctuary in Newberry for a vegan post-Thanksgiving buffet. The owners, couple John and Emma Hoel, held the event and provided dishes free of animal products on tables in the outdoor pavilion area.

John Hoel said the event was to provide a vegan Thanksgiving to those that did not have access to one.

“We want to be a place that rescues animals but also a place that’s a sanctuary for people too who are trying something out that is a little counter-cultural,” he said.

The couple did not charge participants for the event and encouraged a pot-luck style gathering.

According to Hoel, many participants brought their own dishes.

The Peacefield Facebook announcement for the feast encouraged participants to bring their own water bottles to reduce waste.

The event began at noon and ended at 3 p.m. Participants were allowed to pet the sanctuary’s cows through the fence, enter the sheep pen and interact with the other animals.

“We’re biased, but we think this is a really special place and we don’t want to, you know, keep it to ourselves,” Hoel said, “We want to share it with everybody and introduce them to the animals.”

Joan Lyon was at the Sunday event. She said she visits different farm sanctuaries in the area and came to the event to support the Hoels. Lyon is a vegan.

“I saw that they had a potluck here, and I want to support Emma and John and visit the animals and have some good food with some fun people – like-minded people,” she said.

The feast served vegan alternatives to the traditional turkey main course. Beyond brand meat-free sausages and burgers were provided.

Plant-based “meat” may become an increasingly popular substitute for turkey, should the 2021 turkey shortage continue.

An investigation by Vox found the turkey shortage is due to supply chain disruptions and labor shortages in the industry. According to the USDA, frozen turkey inventories are 24% lower than 3-year average volumes, and production of turkeys is lower than average this year.

“Stocks of frozen turkey meat typically follow a seasonal pattern, building throughout the year until the fall, when retailers prepare to meet holiday demand,” the USDA report stated, “In 2021, the seasonal build-up was less pronounced than usual, and stock volumes appear to have peaked before starting an earlier-than-normal decline.”

Reuters stated the price of frozen whole uncooked turkeys in the four weeks before Nov. 6 rose 15.6% from the same period in 2020, according to data from research firm NielsenIQ.

Across from Peacefield’s resident turkey, Mary, Lillian Vaughn stood at the pigpen. Vaughn was visiting from the Orlando area and came with a friend to see the animals.

“I do love meat, but also, being mindful of how much we buy and what certain products you should invest in,” she said, “because there are some places that really don’t care and they heavily mistreat the animals,” she said.

Ruchi Singhal, a resident at UF Health, stood next to Vaughn at the pigpen. She said taking meat out of Thanksgiving would shift the focus from food to actually giving thanks.

According to its website, Peacefield Farm Sanctuary is a 501(c)(3) nonprofit. Hoel said none of the employees are salaried and 100% of profits go to caring for the animals. Donations were accepted.

Masks and proof of vaccination were not required. Hoel said that the main COVID-19 precautions were the outdoor setting and socially distanced seating.

Julian is a reporter for WUFT News who can be reached by calling 352-392-6397 or emailing news@wuft.org.
Previous The Point, Nov. 30, 2021: Florida redistricting process again becomes contentious with new congressional maps draft
Next Protesters gather for final push against UF’s proposed energy plant