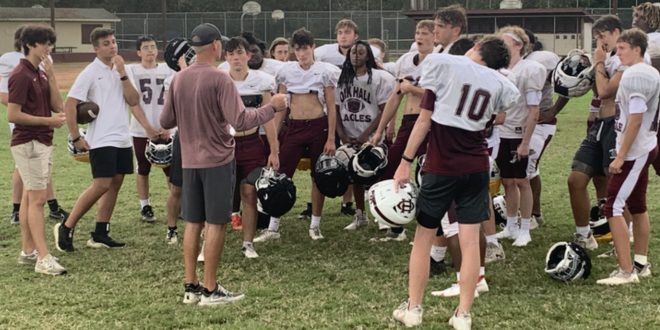 The Oak Hall Eagles high school football team has dealt with an extraordinary loss this season — that of two coaches.

Linebacker coach David Clark died of cancer on July 26 at the age of 54. Assistant coach Ellis Walker Jr. died of a heart attack on Sept. 2 at the age of 69.

The team decided to dedicate the season to their fallen coaches. This season, the Oak Hall Eagles are 5-1, with the single loss on Sept. 24 against Eagle’s View (Jacksonville). The squad is not only playing for their fallen coaches but has found ways to keep them in their memory.

“It was the kids’ idea,” Head Coach R.J. Fuhr said. “You’re playing for more than yourself – more than for just Oak Hall.”

Senior running back and middle linebacker Carter Coleman, 17, said he still hears Clark’s voice telling him, “Do your job.” The team has embraced this mantra.

“[We’re] just playing harder for them,” Coleman said. “Going out there every night and remembering their legacy.”

A voice of reason

Clark started coaching and teaching early in his adult life. The Gainesville High School graduate played one year of college football at Mount Union University before returning to his alma mater to coach football in 1986. Upon returning to Gainesville, Clark enrolled at Santa Fe Community College and the police academy. He served 33 years in the Alachua County Sherriff’s Office and was planning to retire in 2023.

While working as a law enforcement officer, Clark remained close to sports.

His wife, Lisa Clark, 43, recalled her late husband learning lacrosse to help coach their son Wes’ team when he was 6 years old. Wes is now a sophomore at Oak Hall.

“He was the dad on the sidelines that never played a day of lacrosse in his life,” Lisa Clark said.

David Clark went on to get certified to coach lacrosse, which led to him coaching the boy’s lacrosse team at Oak Hall School. When his children- Georgia, Audrey and Wes- began to attend Oak Hall, he got involved with the school’s football team.

David Clark’s death was a surprise to his family, Oak Hall’s football and lacrosse team, as well as the sheriff’s department. Lisa Clark said the family learned of David’s cancer 11 days before he died.

“He touched the lives of everyone he came into contact with,” she said. “The entire football team, and the entire lacrosse team, and half the sheriff’s department showed up at his memorial service. He was very well thought of.”

Dylan Provencher, 16, was expecting to see Clark at summer football practice the following week. The junior tight-end and defensive end had asked Fuhr which coaches would be absent to work their day jobs. Later that day, Provencher and the team heard that Clark had died.

“He kind of policed the team,” said Provencher, who also played lacrosse for Clark at Oak Hall last year. “He kept everyone in check [and] knew how to get us back on track.”

Lisa Clark said life without her husband has been difficult. She said David was the voice of reason in their family’s day-to-day lives.

“He was always very even-keeled, always think things through, [and] never make any rash decisions kind of guy that you could bounce any idea off of.”

The Eagles also lost Ellis Walker Jr., who coached football, track and field and basketball, at the beginning of the school year.

Walker was born and raised in Tampa, Florida, where he graduated from Tampa Catholic High School. He played running back in high school and is a member of the 1971 Hall of Fame class.

Walker went on to play college football at Jackson State University in Mississippi before being drafted into the military.

After serving in the U.S. Navy, Walker would call Gainesville his new home. Walker served his community in several ways including as a bus driver, a deacon at Bethel Seventh-day Adventist Church and a coach to many young athletes.

Barry Hutchinson, 58, was Walker’s best friend. Hutchinson and Walker met 22 years ago at Howard Bishop Middle School, where Walker was head custodian. Hutchinson needed a place for his basketball team to practice.

A few months after meeting in Howard Bishop’s gym, both were hired to coach at Hawthorne High School- Walker for football and Hutchinson for basketball.

Hutchinson said Walker often asked him to help with football, but he was reluctant to do so because he had never coached football before.

The two would coach alongside each other in football and basketball for 16 years at Hawthorne.

“He was really excited about that,” Hutchinson said.

Hutchinson said he still looks for his friend in the hallways of Oak Hall.

Oak Hall’s football players miss their “energy coach.” Walker, who coached primarily with the middle school team was known to give motivational speeches at halftime or a quick word of advice to players who were down on themselves.

“He had a good sense of knowing when someone needed a word,” Provencher said.

Coleman said he talked with Walker the day before he died.

“He was telling me about the kids [on the middle school team] and what I needed to do in our upcoming game,” he said. “It was always about others. He was selfless.”