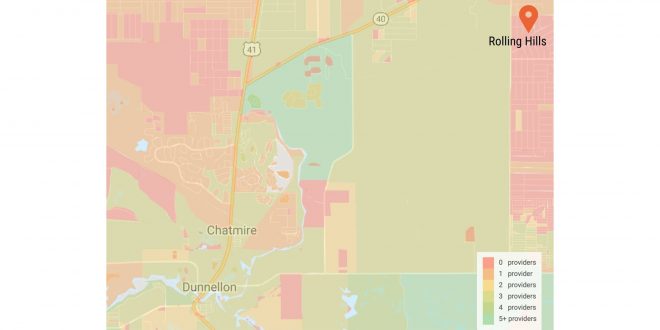 Spotty service means slow Netflix for people in Dunnellon and Rolling Hills, but the issue runs much deeper

For residents in certain neighborhoods of Marion County, two tin cans and a string may do them more good than major communication service providers. In 2021, that is a lot more dangerous than it seems.

“I live by myself and I’m in constant fear that if something ever happens to me, and I have to call 911, on a regular day, I might not get through,” Dunnellon resident Eloy Zayas said.

Zayas, 56, a lead superintendent for a construction firm who has lived on the northeast side of the city for three years said he’s concerned that spotty service poses a safety concern for himself and his neighbors.

Internet and phone service in Dunnellon and Rolling Hills has been a problem for years. In 2020, AT&T stopped offering broadband DSL options of 6 Mbps or slower to new customers. In 2017, Comcast stopped offering cable in Williston because it was no longer profitable.

According to data by the Federal Communications Commission, 17 consumer complaints have been filed in Dunnellon since January due to internet or phone service unavailability. This reflects only a small portion of complaints from residents, according to the hundreds of comments on service-related posts to the Dunnellon Word of Mouth and Ocala Rolling Hills Facebook pages.

Zayas uses HughesNet as an internet provider. HughesNet is one of the most popular providers in the area, but not by choice, Zayas said. Nine providers service the Dunnellon area including HughesNet. Of the nine, only HughesNet and Viasat are available to all residents in the region.

For Zayas, the internet controls his alarm system and television in addition to basic web services.

“It took me three days to watch the last episode of Breaking Bad on Netflix,” Zayas said.

The decision for providers to invest in better coverage for an area is largely dependent upon population, Arevalo said.

This leaves those in rural areas left with lagging internet and phone services. There is 100% internet coverage in the Dunnellon area, Arevalo said.

“It’s just not good enough to stream in all places,” he said. “That’s where the issue lies.”

Arevalo said, city councils or county commissioners have no control over how much a company spends in an area for internet service.

The City of Dunnellon no longer provides internet service, city clerk Amanda L. Odom said. The only information the city is able to offer is the options for service providers in the area.

Arevalo said when the internet in the area was originally established, the speed was adequate for email, web searches and online purchases. However, when television became internet-based, faster speeds were a necessity.

Comcast has invested in cable in the Rainbow Springs area of Dunnellon, but in the area west of U.S. 41, only about 10% of sections are covered.

Alison Skees, 38, a stay-at-home mother in the Dunnellon area, said her 13-year-old son, Brody, uses a continuous glucose monitor for type 1 diabetes. The device, Dexcom, uses the internet to monitor Brody’s blood sugar, but it can only work if there is service.

Skees said she is concerned that her son will not be able to attend Dunnellon High School because it is a “dead zone.”

“How am I supposed to send him to school and be able to take care of him and watch his blood sugar when we live in the Dark Ages out here?” Skees said.

The American Jobs Plan currently in Congress includes adding high-speed broadband infrastructure to reach 100% coverage for people especially those in rural parts of the U.S. The national plan also promotes transparency and competition and reduced costs of broadband internet service to promote more widespread adoption, according to the White House press release.

The proposed infrastructure plan states it would use $100 billion to bring affordable internet to all Americans by 2029, which might improve the situation in Dunnellon and Ocala.

“Broadband internet is the new electricity,” the plan states, “It is necessary for Americans to do their jobs, to participate equally in school learning, health care, and to stay connected.”

Julian is a reporter for WUFT News who can be reached by calling 352-392-6397 or emailing news@wuft.org.
Previous Gainesville City Commission appoints interim city manager
Next This star high school athlete made a bold switch in schools and sports 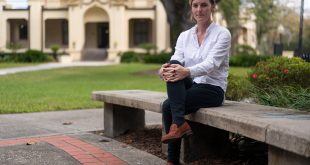 The Emerging Artist Program was developed in response to a challenge: What would it take to diversify the Downtown Festival and Art Show?