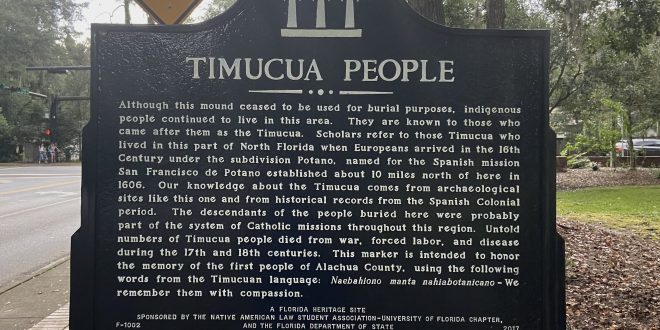 How Gainesville is recognizing its history on Indigenous Peoples Day

Lauren Dostal grew up in Orlando going to traditional and educational events to learn about and embrace her Lakota Sioux heritage.

Dostal takes pride in her cultural background and community but has struggled to meet other Indigenous people during her time in Gainesville. She has struggled to find groups for Native American students on campus.

“The only time I spend with other Indigenous people is when my family visits or when I go up to South Dakota,” Dostal said. “No one here that I know is Indigenous.”

Dostal, a 20-year-old English major at the University of Florida, hopes to attend Indigenous Peoples Day events in the city to honor her heritage, connect with Native Americans and feel visible within the community.

“It’s important for us to allow other people to take a day to just recognize and appreciate Indigenous people,” Dostal said.

“Today, we acknowledge the significant sacrifices made by Native peoples to this country — and recognize their many ongoing contributions to our Nation,” Biden said.

Gainesville will celebrate Indigenous Peoples Day on Monday through a series of events at City Hall and the University of Florida campus.  The commemoration hosted by the City of Gainesville will feature a proclamation reading and historic marker unveiling to honor Gainesville’s original Indigenous inhabitants.

As someone with a long-standing appreciation and respect for Native American communities, Paluzzi, 58, often found herself reading about Native American cultures and history. During her research, she learned about the effects of colonialism on Native American societies and was infuriated that Christopher Columbus was routinely federally recognized.

“I just decided, instead of complaining about it – do something to change it,” Paluzzi said. “I decided I wanted to be part of the solution.”

The process to get the holiday recognized involved presenting at Gainesville’s City Commission meetings, talking to Mayor Lauren Poe, crafting an official proclamation and organizing a taskforce to lead these efforts.

The Indigenous Peoples Day 2021 Taskforce, comprised of members Paluzzi, Robin Wright, Marcus Briggs-Cloud and Anna Borrero Schwait, has been planning today’s event for over a year. Due to the pandemic, there were no public, formal events held by the city last year, but the taskforce used this time to intentionally craft the proclamation and the statement on the City Hall plaque.

“I think it is extremely important for us to recognize and acknowledge that we live on land that was once, and in quite a few cases still is, indigenous land,” said Dr. Robin Wright, affiliate faculty of the American Indian and Indigenous Studies program at UF and member of the Indigenous Peoples Day 2021 taskforce.

The region around Gainesville was inhabited by the Potano people, linguistically and culturally affiliated with the Timucua, who were the principal Native American population of North Florida for centuries prior to European contact, Wright said.

UF was constructed on top of large, ancient Potano settlements and Timucua burial mounds. The sites were damaged during agricultural ventures in the early 1900s, but archaeologists later marked sites at the Levin Law School and Lake Alice on campus with memorial plaques.

Through the introduction of European diseases, the Timucua and Potano settlements were destroyed, but the Indigenous predecessors of Gainesville remain important to local history.

“At any formal gathering, all this should be acknowledged even if there are no more Indigenous peoples living there,” Wright said.

The events planned at UF are hosted by the American Indian and Indigenous Studies program and free to the public. It will include an opening ceremony by United Houma Nation Chief August “Cocoa” and Layla Creppel. They will perform traditional drum music and songs of southeastern Native American nations.

The rest of the programming includes presentations about the challenges Native American communities are currently facing.

Richard Conley, director of the American Indian and Indigenous Studies program and the Indigenous Peoples Day events at UF, said that it was difficult to arrange the programming because of COVID-19 and the significance of the holiday.

“It’s very difficult to get Native American elders, leaders, artists and historians to come on Indigenous Peoples Day because they’re usually at home, doing their own solemn celebrations and ceremony,” Conley said. “We feel particularly blessed this year that we were able to arrange something.”

Conley hopes through the events on Monday to bring some awareness to the Native American cultures here in the Southeast and elsewhere.

Ginessa Mahar, American Indian and Indigenous Studies program liaison and anthropology librarian, will give a presentation at an event hosted by the University of Florida Student Chapter of American Indian Science and Engineering Society. She will speak on UF’s history as a land-grant university on Indigenous land and the ongoing efforts to develop a land acknowledgement in the libraries.

Mahar said that land acknowledgment statements are a way to honor the Native Americans who were living and creating this landscape before colonization and recognize the historical realities of the occupation of Native American lands.

“They’re really just words but the goal of having a statement is to try to enact real actions that can help support Native American students, faculty and community members,” Mahar said.

Mahar said she hopes her presentation can be an open-ended conversation with Indigenous members of the community to spark tangible change on how the university libraries can better support them.

“Through having something like an Indigenous Peoples Day with some educational talks that people can experience, I think that goes a long way toward cultural understanding and recognition for groups that are otherwise very marginalized,” Mahar said.

Nicole Nesberg, Migizi Miigwan (Eagle Feather), is a member of the Sioux Tribe of Chippewa Indians. She teaches American history at Santa Fe College and serves as a member of the Alachua County Historical Preservation Board.

Nesberg manages a project to create plaques around the county to commemorate local Indigenous history.

“I got involved a couple years ago at the community level because of the huge realization that you know, for the most part, Alachua County and Gainesville ignored their Indigenous past,” Nesberg said.

The city’s decision to replace Columbus Day and instead celebrate Indigenous Peoples Day brings her a sense of pride. Her goal is to continue working toward highlighting Indigenous communities beyond just this holiday.

“My dream is to get local place names and street names changed to be more inclusive of [Native American] languages,” Nesberg said. “If you visually see that every day, when you’re driving to work, it gives you a whole new perspective on where you’re at, what this place is and the history.”

Arlette is a reporter for WUFT News who can be reached by calling 352-392-6397 or emailing news@wuft.org.
Previous High Springs bed-and-breakfast preserves its history under new ownership
Next The Lede || Season IV Episode III: Serving Food for Thought 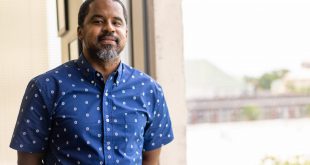