To entrepreneur and lifelong University of Florida Gators fan Joshua “Dave” Rittenour, being able to form partnerships with collegiate athletes is more than just a business opportunity.

“I love UF and working with the athletes is something I’ve always wanted to do,” Rittenour said. “So for me, partnerships were a no-brainer.”

Rittenour, 26, is the owner and founder of the vintage Florida Gators apparel shop Dave’s Freshly Used and is one of the many owners of a Florida-based business that has chosen to enter partnerships with collegiate athletes after the Name, Image, and Likeness law, or NIL, was passed.

The law, which took effect statewide on July 1, allows collegiate athletes to receive compensation for the use of their name, image, and likeness, which was previously forbidden under NCAA regulations.

Until July 1, athletes were banned from accepting any compensation from organizations on the basis of their athletic status, nor were they able to promote brands or businesses for profit in any way. Now, collegiate athletes are allowed to partner with any participating organizations that may choose to engage with athletes for their advertising potential. This means small, local companies such as Dave’s Freshly Used can connect with the roots of their hometown through the athletes that represent it.

“This is a great business opportunity for me, but it’s also a great opportunity to support the athletes I partner with who are representing the Florida Gators. They deserve it too, and I’m glad we can both get something out of working with each other,” said Rittenour.

Lexi Morton, a UF senior lacrosse player and partner of Dave’s Freshly Used, was one of many athletes who chose to seek out a local business to partner within the area. Morton said she wanted to create a relationship with a business that would be mutually beneficial to both herself and the business she represented.

“[Rittenour] really cares about Gainesville and it shows through in his business, so I really wanted to support him and I feel blessed to be able to represent his brand,” Morton said.

Rittenour said he has observed a definitive boost in business since forming partnerships with athletes like Morton. Dave’s Freshly Used is primarily an online store that occasionally holds pop-up shops around the state, so Rittenour said most of the promotion that is provided by the athletes he partners with is in the form of social media advertising.

Rittenour said he gives the athletes free pieces from his shop, and in return, they then post photos and advertisements on their social media pages that highlight his items and business. He said that many people think about the benefits that the NIL agreements bring the athletes, but it is often overlooked how the partnerships are helpful to businesses too.

“I notice that when these athletes post photos in my gear or tag me in stories, I get lots of followers and website purchases immediately after,” said Rittenour. “It goes to show that when people say the Gator nation is everywhere, it really is everywhere.”

Vale Food Co. is another Florida-based business that has partnered with athletes throughout the state since the NIL law.

Joab “Jojo” Francois, a track and field athlete at Florida State University, was one of the many athletes in Florida who chose to partner with Vale. Francois, a 20-year-old sociology major, said that the decision to partner with a locally based company was not intentional, but he is glad to be working with a small business because it allows him to form a better relationship with its members than he could with a nationwide or online-only business. 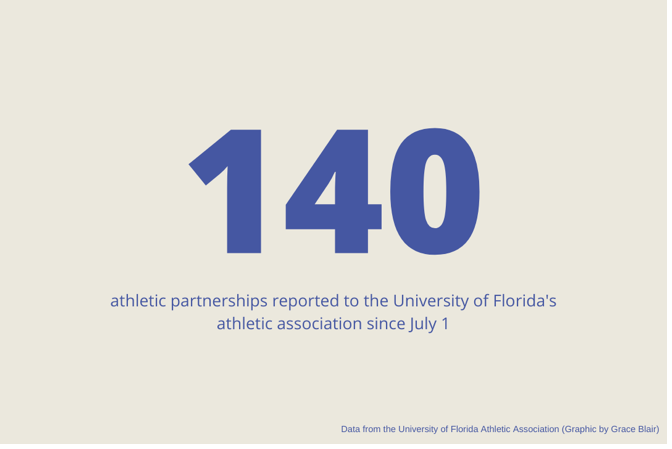 “The team behind Vale is able to always get back to me really quick and provide me with a lot of products and in-person benefits since it’s a Florida-based group that only has a handful of athletes to think about,” Francois said.

Francois said that he found the partnership opportunity at Vale through the sponsored advertisements that other athletes were posting on their social media accounts, which drew him to the company and eventually to forming a partnership with the group.

Sunny Ilyas, owner and CEO of Vale Food Co., said that the partnerships provide a welcome support group that he feels is helpful to a local business.

“It’s still a little too early to see any big financial effects yet,” Ilyas said, “but the brand awareness that the athletes and their social media have helped to bring is a huge thing because now more people know what Vale is and what it’s about.”

Ilyas, 30, founded Vale Food Co. in 2014 while living in Tallahassee. The company has since expanded to have six different locations throughout Florida. Ilyas said he believes partnering with athletes brings his local business into a niche space for growth.

“Maybe we can become the Gatorade of food,” Ilyas said.

Meanwhile, some local businesses are choosing to refrain from forming partnerships this early into the NIL act’s existence.

Keith Miller, owner of Big Mill’s Cheesesteaks on Northwest 13th Street in Gainesville, is one of the many local business owners who has yet to use the marketing strategy. Miller, 53, said that he feels like he doesn’t know enough about the law to be comfortable partnering with athletes.

“The biggest thing for me is still being unfamiliar with it,” Miller said. “I’m just not sure I understand the rules fully, but it is definitely an opportunity that I will consider in the future. I’m not trying to lose a fortune on something I don’t entirely understand yet.”

Through collegiate athletes, businesses now have a way to advertise that is more effective than traditional advertising methods or regular social media activity. Elizabeth “Lissy” Calienes, director of professional master’s program and lecturer in the department of advertising at UF, said having members of a community promoting a business rather than a celebrity or a non-local public figure can be extremely effective.

Calienes said that this can play a big part in why businesses have experienced some success connected to support from athletes on social media.

“The more authentic an influencer can be with their audience, the better an advertisement’s potential can be,” Calienes said. “When it comes to athletes that are involved in a community or a school, the authenticity transfers over to their support for the business.”

Kevin Camps Sr., director of creative media for UF football, said many athletes choose to represent small local businesses for reasons beyond personal gain, likely bringing big payoff for those companies in the future. He said that a good partnership can be beneficial for both the athlete and the business if there is compatibility between the brands that both sides are trying to build for themselves.

“Some big-name athletes just want to support their hometown, or their friends with a small startup, while other athletes simply like the business they’re partnering with,” Camps said. “If it’s relevant to both sides – if it’s a good relationship – it works for everybody.”

Grace is a reporter for WUFT News who can be reached by calling 352-392-6397 or emailing news@wuft.org.
Previous Florida Children Will Receive Over $1 Billion In School Lunch Relief
Next Alachua County property owners can expect a spike in taxes