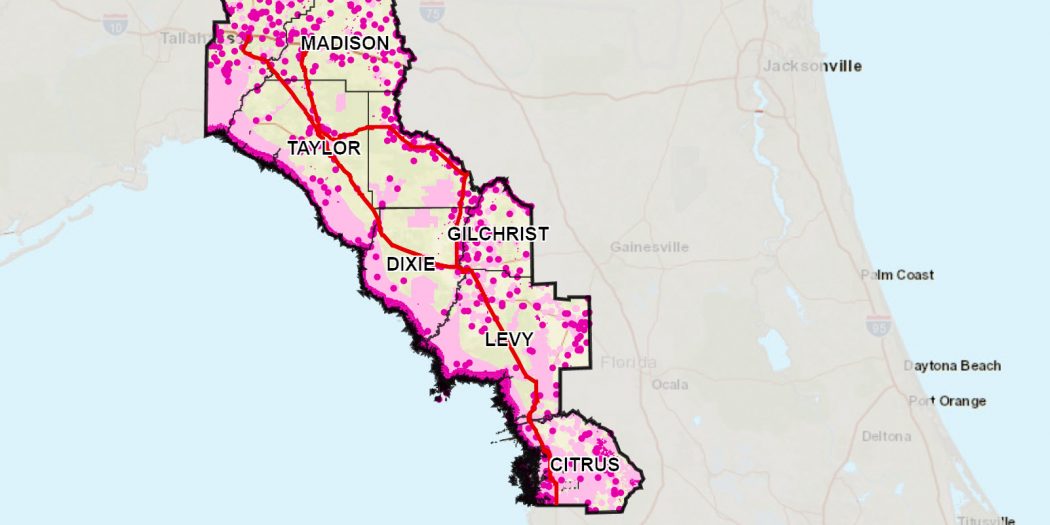 State officials considered the highlighted portions of north central Florida for possible extension of a toll road out of Citrus County and northern into Jefferson County. The plan has evolved due, in part, to the COVID-19 pandemic. (Courtesy of Florida Department of Transportation)

Florida For Two Years Considered Adding More Toll Roads, And Now Much Of That Idea Is Likely Dead

TALLAHASSEE — A Senate proposal to scuttle large parts of a controversial toll-road plan was fast-tracked Friday to the House floor.

With little comment, the House Appropriations Committee supported the proposal (SB 100) to do away with much of the plan — dubbed the Multi-use Corridors of Regional Economic Significance, or M-CORES — pushed through in 2019 by then-Senate President Bill Galvano, R-Bradenton.

The Senate proposal, sponsored by Senate Transportation Chairwoman Gayle Harrell, R-Stuart, would eliminate the road between Collier and Polk counties, while requiring plans to extend the turnpike west from Wildwood to the Suncoast Parkway and to lay out a route that would weave the Suncoast Parkway north along U.S. 19 to connect with Interstate 10 in Madison County.

The Senate proposal relies in part on recommendations of task forces that looked at the road projects last year. Also, lawmakers have cited economic effects of the COVID-19 pandemic, which included forcing the Department of Transportation to trim a work program.

“The key thing we need to do right now, especially after the pandemic we’ve had over the last year and seeing some of the revenue that the department hasn’t gotten over the last year because of people not paying gas taxes, we want to make sure we have the dollars to spend on the existing infrastructure we have in place,” Rep. Jayer Williamson, R-Pace, said.

Lindsay Cross, representing the Florida Conservation Voters, said the proposal is “clearly” an improvement on the M-CORES program, but questions remain about the new road layouts. Environmental groups have fought the 2019 law because of concerns about sprawl and damage to natural habitats.

“To be clear, SB 100 is better than the current M-CORES program, which is a budget-busting boondoggle. Most notably, this bill takes the southwest-central corridor (the road between Collier and Polk counties) off the table so that panthers can breathe a little easier,” Cross said. “It also has less aggressive timelines, but it leaves on the table a new turnpike extension, which in all likelihood will be quite similar to the northern turnpike M-CORES toll roads. The extent of road upgrades needed along U.S. 19 is also unknown. Both of these areas are rich in natural resources and springs.”

Cross added that legislative efforts to “strip growth management and preempt local municipalities from doing what’s right for their residents makes it harder or near impossible to grow smartly in a way that damages less of our irreplaceable natural areas.”

The task forces, which spent about 15 months reviewing the M-CORES projects, sent a report to lawmakers in November calling for a deeper dive into the future traffic needs of the state.

They also suggested lawmakers direct the Department of Transportation to further determine if the M-CORES projects would reduce congestion on Interstate 75; establish how the roads would be used for disaster evacuations and response; consider the economic pluses and minuses in shifting traffic into rural regions; work with local governments so utility and broadband expansions meet existing policies about urban sprawl; and protect environmentally sensitive resources such as springs, wetlands, and floodplains.

The M-CORES projects were promoted by Galvano as a way to help handle future growth, and he linked the roads with adding broadband and other infrastructure.

Under Harrell’s proposal, transportation officials would develop a plan that would extend the Suncoast Parkway north along U.S. 19 by the end of 2035.

The bill also would direct transportation officials to start project development and environmental work on an extension of the turnpike from where it ends now in Wildwood. They would have to submit a report to legislative leaders and the governor on the project by the end of 2022.

The M-CORES projects, if they continue, are slated to be completed by 2030.

The bill would include non-tolled alternatives for local traffic along U.S. 19; require property owners impacted by the roads to get at least one access point for each mile of land owned; and seek to avoid dividing historic minority communities.

The News Service of Florida is a wire service to which WUFT News subscribes.
Previous Gainesville City Leaders Now Have Two Years Of Pandemic-Era ‘Neighbor Surveys’ On Which To Base Future Decisions
Next UF Ethics Group Hosts Community Discussion About Gentrification