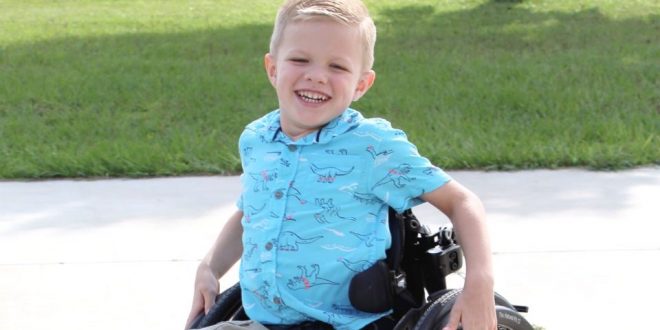 Jacen Mancil has been going to physical therapy at the Center of Recovery & Exercise since he was 2 years old, but this summer he will undergo his most intensive therapy yet. (Photo courtesy of Alyssa Mancil)

An Accident Took A Boy’s Ability To Walk. A Community In Ocala Wants To Give It Back.

Jacen Mancil never got to take his first steps as a toddler, but that could soon change due to the efforts of a small community in Ocala.

Jake Mancil, Jacen’s father, calls Aug. 29, 2016, the worst day ever. His son was struck by a vehicle that day and has been confined to a wheelchair ever since. Now 5 years old, Jacen hopes to walk some day and has begun to show signs of movement in his legs. Members of the Ambleside School of Ocala came together over the past month to organize events to raise funds for intensive physical therapy.

The campaign could help make Jacen’s dream a reality.

On the day of the accident, Jacen was a year old. His biological mother was pushing him in a stroller alongside a busy road in Clarksville, Tennessee, where the family lived at the time. A driver stopped to offer them a ride, but another car swerved to avoid hitting the first and struck the baby and his mother.

Jacen was airlifted to a nearby medical center, where he spent two months – and an additional month at a rehabilitation center in Atlanta – recovering from several broken bones, a traumatic brain injury and a spinal cord injury. His mother escaped with minor injuries.

Jacen’s father was an hour away at Fort Campbell Army Base along the Kentucky-Tennessee border when he heard the news. He had just been assigned there after a tour of duty in Iraq and was given little information about what had happened, but he was quickly on his way to the hospital to meet his son.

“I was just thinking it wasn’t gonna be as bad as it was,” he said, recalling his drive to the hospital that day.

Jake Mancil said he was scared and wondering whether his family was OK as he neared the hospital.

When he arrived, he was shocked by what he saw, he said. His son was sedated in the hospital bed with tubes attached to him and a brace around his neck, he said.

Jacen’s accident left him a quadriplegic, and he has since been confined to a wheelchair.

At one point during Jacen’s stay in the hospital, Jake Mancil said the boy’s heart stopped.

“They didn’t know if he was gonna make it,” he said. “I thought it was over, but he pulled through.”

Five years later, Jacen continues to progress against all odds.

“The general consensus by doctors is: Once you hit two years post-injuries, you’re done recovering,” said Alyssa Mancil, Jacen’s adoptive mother, “but he’s continued to improve way beyond that, even two years afterward. His posture and core strength is much better; he can sit up almost independently; he’s been able to intentionally move his legs a little bit.”

Jacen’s father and biological mother divorced shortly after the accident, and Jacen and his father moved to Ocala where their extended family could help meet Jacen’s needs. He was honorably discharged from the army, allowing him to become his son’s primary caretaker.

The support in Ocala

In Ocala, Jake Mancil reconnected with Alyssa, a friend from his early childhood. The two married in 2018 when Jacen was 2 years old. She legally adopted Jacen in 2019 and said she never hesitated to assume a motherly role in his life.

“Jacen was just a happy little kid,” she said, recalling the beginning of her relationship with him. “He wasn’t sad or stuck doing nothing. He was very interactive and just a normal kid.”

As a kindergartener at Ambleside, Jacen has found a community that accepts and supports him, something his family said was hard to come by following the accident.

It was a difficult enough decision for the parents to put Jacen in school at all during the COVID-19 pandemic because he has limited control of his diaphragm, making him susceptible to pneumonia and severe illness from the virus.

But another obstacle came when a number of schools in the area refused to accept him as a student because his spinal cord injury took control of his bladder and bowels, a responsibility they were not prepared to take on.

“As we interacted with him and his family,” Romine said, recalling the day Jacen was accepted into Ambleside, “we saw so beyond the limitations and wanted him to have an Ambleside education and community that is so rich and meaningful.”

To prepare for Jacen’s first day of kindergarten in August, the school needed to install a ramp to accommodate his light-up wheelchair – which his friends think is very cool.

In what Romine called a “step of faith,” she said the school invested in a $15,000 ramp for Jacen without first having the money in its annual budget.

Hope for the future

Following this expenditure, the Ocala Marion Community Foundation organized a Give 4 Marion campaign, allowing local non-profit organizations to take part in raising money for a cause. Some $300,000 was raised overall for 81 different organizations, and the campaign for the Mancils amounted to nearly $15,000, Romine said, meeting the school’s need to rebalance its budget.

The ramp was installed just days before the school year began on Aug. 10, and Jacen was ready to go. The Ambleside community’s efforts to support him did not stop there.

Recently, Jacen’s family has been working with the school to raise money for a monthlong session of intensive physical therapy at the Center of Recovery & Exercise in Altamonte Springs.

Jacen has regained feeling in parts of his back and chest and has shown signs of movement in his legs, Alyssa Mancil said. He has also finally expressed an interest in being able to walk and a curiosity about why he can’t.

“He’s got a lot of energy,” Jake Mancil said, “but he can’t express it as much as the other little boys do.”

Jacen has lots of friends, and his classmates try to be inclusive. But on the playground, Jacen rolls back and forth in his wheelchair, watching the other kids run past, his adoptive mother said.

Jacen has hope that he will walk someday, particularly when he is “bigger,” he always says.

He has been doing physical therapy since he was 2 but never to the extent of the summer program in Altamonte Springs, Alyssa Mancil said.

Because Jacen was so young when he was injured, doctors are unsure whether he will ever walk independently, but that is ultimately the goal, she said.

Sitting in a chair all day has weakened Jacen’s muscles and has lowered the blood circulation to his legs, she said, but the progress he has shown so far is promising.

The cost of therapy paired with that of commuting from Ocala to the rehabilitation center every day for a month comes out to $10,000, a portion of which the family has raised by starting a GoFundMe and a PayPal account in Jacen’s name, curating a presence on social media and selling merchandise that reads: “Next Steps for Jacen.”

To meet the remainder of the family’s financial needs, Ambleside made raising money for Jacen a priority, Romine said.

The school in March organized a “Kindergarten Wheely Fun Night” in which Jacen’s classmates and their families headed to a pavilion in downtown Ocala with their bikes, scooters, roller blades and other wheeled devices to ride alongside Jacen, earning pledges from the community on his behalf.

“To see his classmates ride with him was really sweet and meaningful,” Romine said. “It was a way for the class to specifically show love and support for their classmate.”

The school in March also hosted an event similar to “Jump Rope for Heart” called “Next Steps for Jacen” in which students asked for sponsors to donate money and devoted their physical education time in school to doing activities like playing soccer and hula hooping to earn this support, she said.

Every student in every grade at Ambleside came together to raise money for Jacen, Romine said. She laughed, recalling one 5-year-old student who came into her office with an envelope filled with $850 earned from a lemonade stand.

Maylin Dersch, a seventh grade student at Ambleside, raised over $1,000 by going door-to-door in her neighborhood and asking for donations.

“I am just so amazed that our school is a safe place where we can come together and help Jacen out,” she said. “(I hope) that in the future he would walk across the stage and graduate from Ambleside High School.”

Nearing the end of the school’s fundraising efforts, Alyssa Mancil said she expected about half of the $10,000 goal to come from Ambleside. But in total, the school raised over $16,000 for Jacen, Romine said, and he will attend his most intensive physical therapy yet for four hours a day through the month of June.

The rest will be used for at-home equipment for Jacen, Alyssa Mancil said.

“I am so grateful that he’s part of our community,” Romine said, “and I know I speak for everybody in the community – teachers and staff and students – that this is exactly where he should be.”

To donate funds for Jacen’s ongoing physical therapy, visit his GoFundMe page. General donations can be sent to his PayPal account.

Lyric is a reporter for WUFT News who can be reached by calling 352-392-6397 or emailing news@wuft.org.
Previous April 6, 2021: Afternoon News In 90
Next ‘The World Isn’t Against You:’ Gainesville Community Playhouse Returns To Musicals With ‘Fun Home’