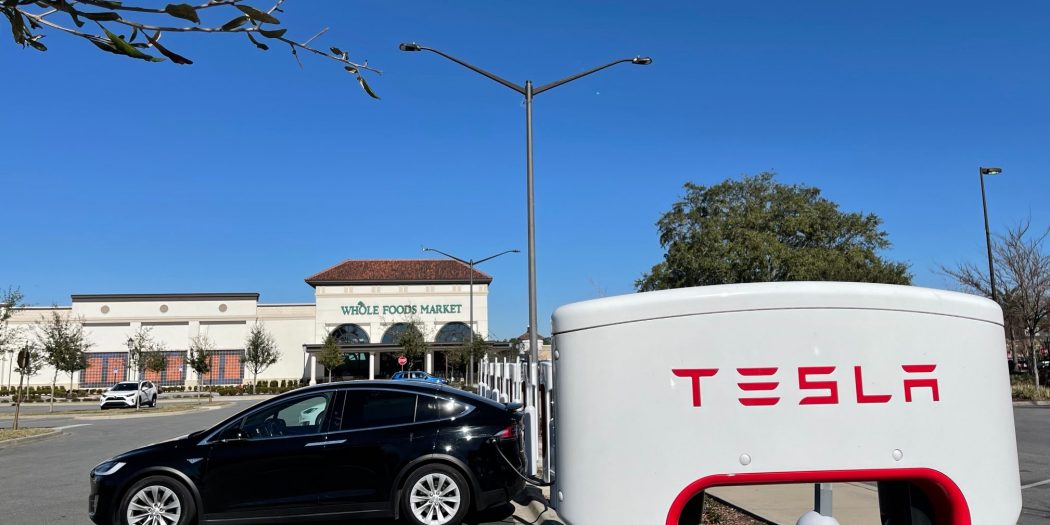 Gainesville’s Tesla charging station is located near the Whole Foods in Butler Plaza and usually has at least one electric vehicle — Tesla or not — parked for refueling. (Grace Banahan/WUFT News)

Still, without tax incentives for drivers or executive action for manufacturers, the state’s next steps are tentative.

According to the roadmap released Jan. 5, Florida currently has 60,000 EVs on the road and is projected to double its EV numbers in the next 10 years. State agencies, advocacy groups and electric vehicle drivers are preparing for this growth but attribute the upcoming workload to different sectors.

Central Florida Clean Cities Coalition director Doug Kettles, who is one of the four authors credited with preparing the roadmap, pins the projected EV momentum to its newfound affordability.

“Electric transportation is at a tipping point that is related to the price parity between a gas vehicle and electric vehicle,” Kettles said. “It used to be that electric vehicles were the less affordable option, and that is not the case anymore.”

He thinks that businesses will be the proponents of EV growth in Florida.

“The businesses will lead the way, they have the fiduciary responsibility to do so,” Kettles said. “They won’t be able to ignore the lower cost of ownership, which is when it’ll really take off.”

A Consumer Reports study from October found that EV drivers spend 60% less to power their vehicle than drivers of a vehicle fueled only by gasoline.

“If you do pay a little bit more up front, then you will recover it because you won’t be paying it elevated at the pump,” Kettles said.

Dory Larsen, the electric transportation program manager at the advocacy group Southern Alliance for Clean Energy, said the cost effectiveness of going electric is due to the efficiency of electric charging, which uses 50% less fuel than gasoline pumping.

Larsen thinks EV growth will come from consumer education on the benefits of electric vehicles.

“A barrier to EV adoption is lack of understanding by the consumer,” Larsen said. “There’s a learning curve that needs to happen, and the state could help with that.”

Florida could also spur EV growth through policy solutions within the government.

Larsen said executive action can have a significant impact in Florida’s course to increased electric transportation.

Colorado Gov. Jared Polis signed an executive order in January 2019 that designated state funds toward electrification of transportation and supported a transition to zero-emission vehicles, or “ZEVs.” California Gov. Gavin Newsom has also issued executive orders to increase ZEV numbers within the state.

“If (Florida Gov. Ron) DeSantis is all about going big and bold, this is the right path,” Larsen said.

Florida’s existing policies have already created a successful sales market for electric vehicle company Tesla, Inc. Over half of all EVs in Florida are Teslas.

Tesla’s sales model relies on selling vehicles directly to customers without the use of an independent dealer. Eighteen states prohibit or restrict these types of direct manufacturer auto sales. Florida does not.

“We are a direct sales state,” Larsen said. “So you can buy a Tesla in Florida, where in other states like South Carolina, you’d have to cross state lines to purchase it.”

“The benefit to a growing electric vehicle market is keeping money in the state,” Larsen said.

According to a study by Atlas Public Policy and SACE, as of August 2020 only 35 of the 52 EVson the market were offered in Florida.

The lack of options has led EV drivers like Dewayne Hyatt to take their business out of the state.

When Hyatt decided to switch from his plug-in hybrid Chevy Volt to the 100% electric Hyundai Kona, he purchased the car in Maryland because it was not available in Florida.

“Giving automobiles manufacturers more incentive would help, but I’d like to see the industry stand on its own two feet,” Hyatt said.

Maryland offers several tax incentives for EV purchases and is one of the 12 states, including California and Colorado, that has adopted the ZEV program.

Hyatt, who works at the University of Florida as a systems administrator, can make his 40-mile commute without charging his Kona, which has a 265-mile range.

Like 80% of EV drivers, he usually charges at home. If not, Hyatt’s parking garage at the university has six charging stations.

In his hometown of Ocala or driving along the highway, however, he’s shorter on options.

“I have to drive to Gainesville to find a charging station because there aren’t any where I live,” Hyatt said. “It’s pretty inconvenient on the highway too because you only have one company to choose from, and they’re spaced out pretty good.”

The benefits of frequent charging stations on the highway include more than just convenience. Susan Glickman, who is SACE’s Florida Director, sees charging stations as a necessity in Florida’s hurricane-prone environment.

“People need to have confidence that they can evacuate and won’t get caught looking for a place to charge,” Glickman said.

According to the EV Roadmap, there is currently “little infrastructure in the interior of the state to support evacuation, significant portions of I-75, and I-10 in the panhandle have very little fast charging.”

Under SB 7018, which was signed into law July 2020, the Florida Department of Transportation is required to submit a master plan for implementing electric vehicle infrastructure along evacuation routes by July 1.

“We want tourists to drive to Florida in their electric cars without any range anxiety,” she said. “Having charging infrastructure is vital to our economy.”

Glickman believes that the appeal and attractiveness of electric vehicles is at the center of their projected growth in the state.

“Once electric vehicles take off, it will be faster than anyone would think,” she said. “The growth isn’t going to be linear, it’ll be exponential.”