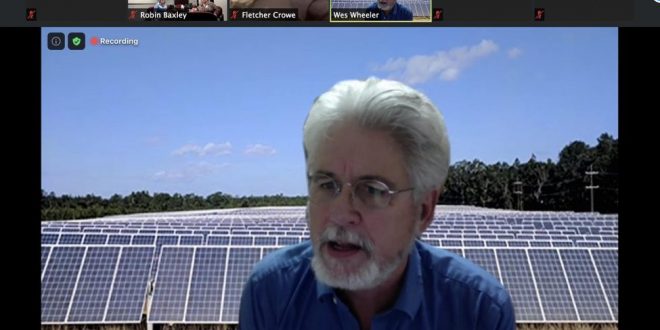 Utility Advisory Board Vice Chair Wes Wheeler discusses his views of the 2019 Integrated Resource Plan and voices his support for more sustainable practices. (Courtesy of City of Gainesville)

Gainesville’s utility is not going green fast enough for the city’s Utility Advisory Board members.

The board, which advises the City Commission on Gainesville Regional Utilities issues, met Tuesday to discuss a document known as the 2019 GRU Integrated Resource Plan. Within minutes of the meeting beginning, a push for more progressive sustainable practices at GRU became the theme.

The plan is an analysis of Gainesville’s energy efficiency and serves to advise on energy resources in the decades ahead.

GRU first presented the plan in February 2018. A national non-profit known as The Energy Authority helped to write it. The group works with utility companies around the country to come up with analyses of energy resources and future plans. The idea behind the 2019 document was for GRU to diversify its energy resources to be more sustainable and cost-efficient. The plan looked at Gainesville’s energy opportunities and made predictions for the 20 year period of 2019 to 2039.

The 2019 plan has been a guiding force for the utility since that point, but the time has come to draw up a new one.

Since its inception three years ago, utility leaders have made considerable changes to their policies that the initial plan did not include. Among them are the 2045 Net Zero Emissions resolution that the Gainesville City Commission approved in October 2018 and the more recent GRU solar invitation to negotiate, which was an opportunity for companies to discuss with GRU’s general manager Ed Bielarski the cost and benefits of a solar facility to begin to accomplish the 2045 goal.

GRU staff earlier this month presented an initial update to the board. The presentation touched on Gainesville’s renewable energy options like large-scale solar and biomass and other alternative options for energy in Gainesville. That meeting was the basis of Tuesday night’s discussion on the next plan, which is expected to emerge in early 2022.

The plans, GRU staff said, will be reevaluated and potentially changed on a rolling basis, as is happening now with the 2019 version.

Board Vice Chair Wes Wheeler was the first to voice his reservations about the current plan, critiquing it for an approach he said looks “at fuel cost alone.” He emphasized that “there is the social-economic perspective” that the utility should address.

Board member Barry Jacobson spoke after Wheeler, complementing GRU staff for their work before launching his own critiques. Johnson took issue with GRU for its messaging on certain energy sources.

“My pet peeve is the way GRU talks about natural gas,” Johnson said. “It pains me to hear GRU promote natural gas as green…To me, that seems pretty disingenuous.”

Bielarski stood by GRU’s stance that natural gas is a fuel source cleaner than coal. Jacobson after the meeting pointed to a 2014 report from the Union of Concerned Scientists that notes the drilling and extraction of natural gas is a contributor of greenhouse gases.

Utility Advisory Board Chair Wendell Porter touched on the necessity of GRU and Gainesville to begin to move away from natural gas by switching about 34,000 customers to electric water heaters, converting the RTS bus fleet to electric within the next five years and by adding the University of Florida as a customer.

“I think we really need to put some pressure on the University of Florida to support the city and make GRU its provider,” he said.

That nearly decade-long push, which would be a boon to GRU’s financial position, is expected to gain steam as Duke Energy’s contract with the university is set to expire at the end of 2021. GRU didn’t make much headway in the effort when the last Duke contracted expired.

The board’s comments and concerns will be shared with the Gainesville City Commission at an upcoming meeting.

Lawren is a reporter for WUFT News who can be reached by calling 352-392-6397 or emailing news@wuft.org.
Previous Sign-Up Website, Call Center, Collaborative Committee, Town Halls Are Part Of Alachua County’s Vaccination Strategy. Is It Enough?
Next The Point, Jan. 28, 2021: ‘Two Masks Do Work Better Than One’: Experts’ New Advice For Stopping COVID-19 Spread