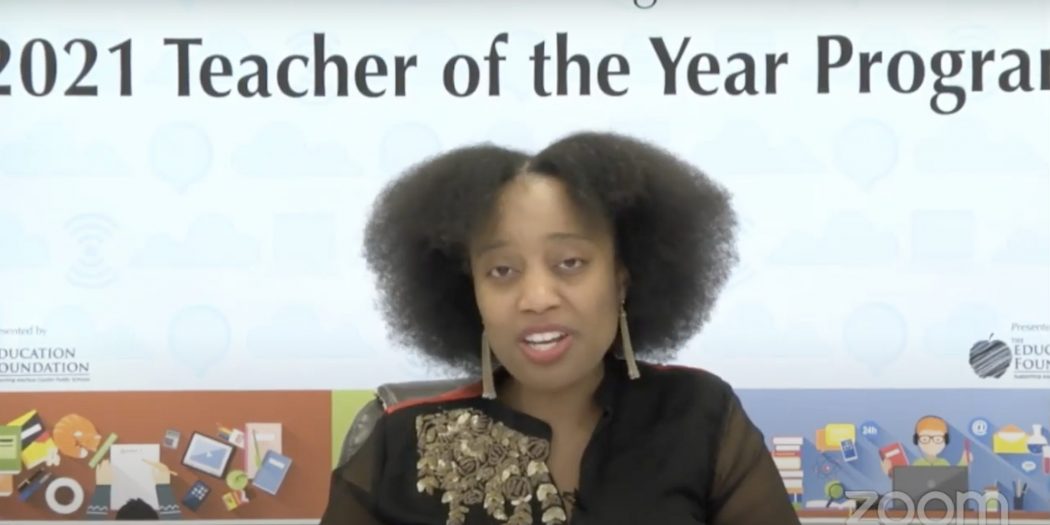 Nicole Harris of Gainesville High School credits her role models for helping her to become worthy of being named 2021 Alachua County Teacher of the Year. (Marlena Carrillo/WUFT News)

Nicole Harris says all teachers relate to how Mark Nepo begins his poem “Adrift”: “Everything is beautiful and I am so sad. This is how the heart makes a duet of wonder and grief.”

Harris was named 2021 Alachua County Teacher of the Year during a virtual ceremony hosted Thursday by the Education Foundation of Alachua County and held on the school district’s YouTube channel.

An English and African American history teacher at Gainesville High School, Harris, 34, was introduced during the event by a former student, Briyona Lawrence, a founding member of ‘Canes on Da Mic, a literacy arts and civic engagement organization the instructor established.

“Ms. Harris always made sure that, as a student, I was developing a sense of responsibility and learning independence when it came to classwork, yet she never made me feel alone,” said  Lawrence, a 2020 GHS graduate who is studying psychology at Santa Fe College.

“You’re not just a teacher of the year, but you’re a teacher that’s one of a kind,” Lawrence said.

The other two finalists selected by previous honorees of the Robert W. Hughes Teacher of the Year award were Mackenzie McNickle, a math teacher at Stephen Foster Elementary School, and Amy Beres, a music teacher and band director at Howard Bishop Middle School.

Harris will represent Alachua County Public Schools in the 2022 Florida Teacher of the Year Program. All 40 nominees received a $500 cash award and other gifts at their classrooms prior to the event, which the foundation livestreamed due to COVID-19 concerns.

Rachel Debigare, the organization’s executive director, said they were polled to determine a comfortable ceremony format – and that the pandemic was an incentive, not an obstacle.

“Not having it was never an option,” Debigare said. “More than ever, it is a priority to recognize our teachers. They are those frontline workers that are educating our students.”

Interim superintendent Carlee Simon and school board chair Leanetta McNealy were among those who offered remarks. McNealy said this school year “will never, ever be forgotten.”

A short, pre-recorded clip of each honoree teaching and discussing his or her philosophy as an instructor was displayed after individual introductions from event sponsors.

The finalists were then welcomed to the screen via short speeches by some of their students. The honorees then talked about their beliefs and goals as educators. Harris thanked her teaching role models and praised them for preparing and inspiring her.

“I get a lot of credit for being creative, but I kid you not: Every idea I’ve executed comes from the experience I had as a learner,” she said.

Kirk Tapley, a history teacher at Howard Bishop Middle, was the 2020 award winner and voted to decide this year’s finalists. Tapley told WUFT News that the winner is typically a creative thinker who extends his or her compassion to students.

“You see them as human beings instead of just faces in a desk,” he said.

Tapley added that, when looking at their resumes and teaching philosophies, he considered which nominee shared ideals most similar to his own.

“If I had a kid, who would I want to be their teacher?” he asked. “Does the teacher act like their own kid is in their classroom?”

McNickle, who has taught for nine years at Stephen Foster, said in an interview that she was grateful to have been nominated.

“A lot of times we just go through the day to day without receiving any recognition,” she said. “We can go weeks without feeling like we’ve been thanked for what we’re doing. I really enjoy the ceremony – and I really get a boost from it.”

Beres has taught at Howard Bishop since 2007 and been its band director for more than 10 years.

“I don’t think any of us really, as teachers, feel the need to have big ceremonies and things like that,” she said. “We do what we do because we love our kids.”

Harris has taught at GHS for eight years. In addition to the ‘Canes on Da Mic organization, she piloted a writing course for a program affiliated with Cambridge University.

She stressed to her fellow educators the importance of making time for themselves.

“Self-care is a character of education,” Harris said. “Teachers need to know that they deserve it, because there’s a lot of sacrifice in this profession.”

Despite being recognized for her personal achievements, Harris turned back to her role models to describe the satisfaction she received from the new title.

“I now feel as though their labor is not in vain,” she said. “I hope that my win solidifies and reinforces that it was all worth it.”

Marlena is a reporter for WUFT News who can be reached by calling 352-392-6397 or emailing news@wuft.org.
Previous Florida Begins To Restrict COVID Vaccine To State Residents
Next GPD, City Officials Respond to Recent Traffic Tragedies Near UF Campus