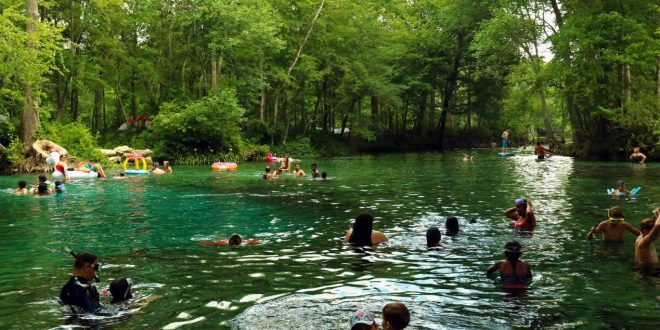 TALLAHASSEE — Rejecting arguments by the Suwannee River Water Management District, an administrative law judge has backed renewing a permit for a North Florida business to pipe hundreds of thousands of gallons of spring water a day to a nearby bottling plant.

Judge G.W. Chisenhall this week issued a 44-page order recommending that the district approve the permit for Seven Springs Water Co., which sells water to a Nestle Waters North America bottling facility in the Ginnie Springs area of Gilchrist County.

Seven Springs filed the challenge last year after the district indicated it would not approve the permit. In part, the district pointed to the water being used by Nestle, while the five-year permit would be held by Seven Springs.

“The greater weight of the competent substantial evidence establishes that the water allocation will be sealed in bottles, packages, or other containers for sale for human consumption at the … facility, which is not owned or controlled by Seven Springs (one of the effects of this is that there will be no way for the district to ensure compliance with any conditions for issuance limiting the bottling/packaging use — the district will not be able to enforce the permit against Nestle),” the district said in a document filed last month in the case.

But Chisenhall pointed to a contract between Seven Springs and Nestle and wrote that Seven Springs “provided reasonable assurances, supported by competent, substantial evidence during the final hearing” that the plant would be able to process the requested amount of water.

“Seven Springs provided competent, substantial, and unrebutted evidence of the contractual obligation between it and Nestle, and of the obligation for all water to be used at the … bottling plant,” Chisenhall wrote. “Thus, the district now has reasonable assurances that all of the water withdrawn by Seven Springs will be utilized for a beneficial use, i.e., bottled water for personal consumption.”

Under administrative law, Chisenhall’s recommended order will go back to the district for final action.

The proposed permit renewal has drawn criticism from environmentalists, who point to concerns about issues such as the effects of spring withdrawals on the Santa Fe River. The proposed permit would allow Seven Springs to withdraw nearly 1 million gallons a day from its wells and provide it to Nestle.

Attorneys for Seven Springs said in the filing that the permit renewal meets legal standards and would not cause harm.

“(The) issues in this proceeding are not whether the renewal is consistent with the overall objectives of the district, as it is, or whether it will be harmful to the water resources of the area, as it will not,” the document said. “Instead, the district’s issues revolve around administrative issues, specifically: the contractual obligation, the ability to process the requested allocation of water, and the beverage processing facility location. None of these issues impact the environment or water resources of the area.”

The News Service of Florida is a wire service to which WUFT News subscribes.
Previous Hank Aaron, Baseball’s One-Time Home Run King, Dies At 86
Next House Transmits Article Of Impeachment Against Trump To Senate